This pair worn by a British princess can be yours too

When the British royal couple visited Pakistan in October last year, Princess Kate Middleton's style was the center of attention.

During her five-day visit, the British princess selected many Pakistani designers and impressed everyone around the world with her style.

However, one of Kate Middleton's style came to the fore when she chose a white shalwar kameez with a famous Pakistani brand embroidered with black thread.

The dress is worn by the princess also became very popular among women, after which the designer was asked many questions about the pair, while many women also expressed their desire to buy the pair on social media.

And now Advertising brand designer Khadija Shah is also selling her dress online for women and the women who want to get this dress will have to pay Rs 29,500. 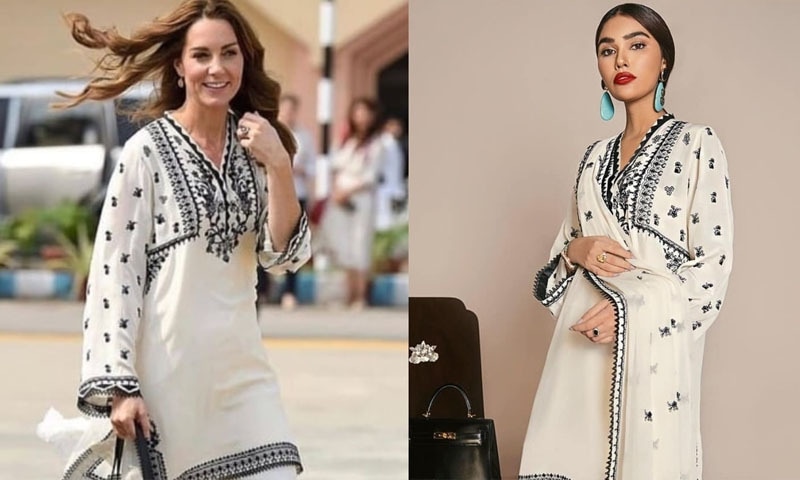 The brand announcement is re-launching this dress in the Eid collection and women who want to buy it should know that this dress of the brand is very expensive.

The couple was spotted wearing a model on the brand's Instagram account, which stated that it cost Rs 29,500, while it was made of 100% silk fabric.
The dress was named "Royal Garden".

Last year, Kate Middleton wrote a letter of thanks to Khadija Shah, a photo of which the designer shared on her social media accounts.

The British princess wrote in her letter that 'thank you very much for my help in visiting Pakistan'. According to the princess, she is very grateful to the designer and her team who made such wonderful clothes for her.

The princess said that she liked her clothes very much.

Kate Middleton also wrote in her letter that "Pakistan is a great country, where both of them had a lot of fun." In her letter, the princess also expressed her desire to return to Pakistan.

While sharing the photo of this letter, designer Khadija Shah had written that "I am very happy that I was chosen".

It may be recalled that during her visit, the princess, in addition to the brand announcement, also adorned the costumes of Bonanza, Zain and designer Mahin Khan.

Jedda Punct Smith broke the silence at the Oscars

Related Posts
Arabic Mehndi designs For Eid, Fingers, and for Kids,
Fashion Review: Khaadi Summer Collection 2020
This pair worn by a British princess can be yours too
Saudi Arabia's First 'Plus Size' Model and TV Host
Check on the 5 Upcoming T-Shirt Printing Trends
Best Hair Straightener You can Buy in Small Budget
virtual fashion show: Zara Abid Tribute to the doctors who fought Corona
7 BEAUTY HACKS EVERY GIRL SHOULD KNOW | MAKE LIFE EASIER