Aijaz Aslam was born on 3rd October 1972 in Gujrat, Punjab, Pakistan is a Pakistani television actor and model and designer. He has given a lot of his to the Pakistani industry and that was unmatchable and that remembered a lifetime. He is known as one of the finest actors in the industry.

A few of his notable works are "Ishq Junoon Dewangi” with Humayun Saeed, Adnan Siddiqui, Humaima Malik, and Faysal Qureshi, Meri Zindagi Hai Tu”, “Dil e Muztar” with Sanam Jung, Imran Abbas, and Saba Hameed, “Dolly Darling” with Nida Khan, Uroosa Siddiqui, and others. “Ramz e Ishq” with Mikaal Zulfiqar, Kiran Haq, and Hiba Khan and many other serials he did and he puts all his efforts to make his serials best.

Aijaz Aslam is married to Sabeen Aslam and the couple has a beautiful young daughter named Misha Aslam.

Aijaz Aslam holds a degree in Fashion Designing from London.

Aijaz Aslam Revealed how he got Injured while Shooting a Suicide Scene:

Pakistani famous actor Aijaz Aslam got famous after playing lead roles in drama serials Kashkol, Mehndi, and Kis Din Mera Viyah Howay Ga. The actor Aijaz Aslam is considered one of the greatest actors in Pakistan. Recently, he is playing a supporting role in the drama serial Log Kiya Kahenge in which he shot a suicide scene. 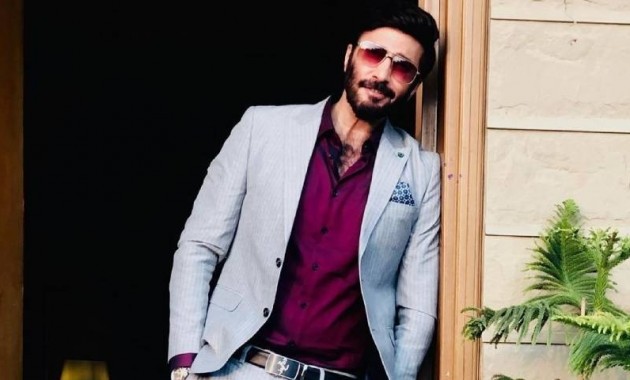 The drama serial is about a family man who wants his family to the highest level. In the drama serial, his role is about to end in a very heartbreaking way and he takes his own life. On Instagram, he also shared how this scene is going to be done in a serial.

Aijaz Aslam recently appeared in a new drama serial as a supporting role Log Kya Kahenge. The story is about a family man who wants to give everything best to his family but, due to financial problems, he takes his own life. Aijaz Aslam puts light on suicide, the person who commits suicide. He requests people to keep an eye on the behaviour of their loved ones. He said that suicide is a public health problem worldwide. More than one million kill themselves because of some problems with their loved ones. He said that this is very serious, everyone is facing it, so try to change your behaviour with a loved one who is quite sensitive and needs your support.

Aijaz Aslam is a famous actor of the Pakistani Showbiz industry who entertained the audiences with his fabulous acting. Aijaz Aslam gave a message to everyone to adopt a healthy life. He said that my choices of life have changed when I decide to change my shape, and I take this very seriously. I try to maintain a healthy lifestyle which was not so easy for me and many other people. Aijaz Aslam said my major goal is to stay healthy and fit and active as long as I can. He said good meals are very important for us to maintain our healthy; healthy meals. After this, he said the second thing for a healthy life is a workout. He said eating healthy doesn't mean you are healthy, you need to work out properly as you make healthy meals.

After this, he focused on Peace of Mind. He said mental health is more important for life. He said that we should do something healthy which makes our mind relax. So, we can make our life healthier and more relaxed. In the end, he said these things are very important to adopt a healthy life.

Faisal Qureshi and Aijaz Aslam have worked in many drama serials together and these two celebrities are best friends in their real-life lives for the longest time. In an Interview, Aijaz Aslam said that we make a perfect team and we work together on different projects. Aijaz Aslam said that we spend a lot of quality time together when we take a break from our work. The two friends don't talk about their friendship on a screen that doesn't mean that they are not friends. Aijaz Aslam and Faisal Qureshi shared a strong bond of friendship.

Vin Diesel Starts Singing After Acting, First Single: "Feel Like I Do"

Steven Crowder Biography - Career, Louder with Crowder, and Net Worth