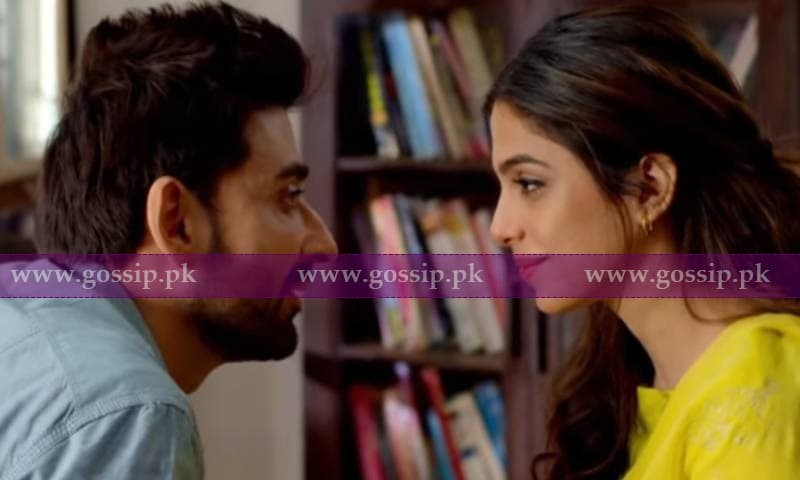 After a pronounced triumph in the drama Aisi Hai Tanhai, Mere Harjai, and Ishq Zehnaseeb, there is another upcoming likely-looking screenplay by our favorite onscreen couple Sami Khan and Sonya Hussain. Sonya Hussain is playing the role of a girl suffering from a mental disorder named Schizophrenia.

Up till now, two of the teasers for the upcoming drama Saraab have launched. In the first trailer, Sonya Hussain and Sami Khan are eyed on an overpass with faces revealing elation and intimacy. They are running towards each other, which shows their prior rapport. The scenes seem astonishing and staggering full of frondescence. After this heartfelt clip, the irony props the viewers into bombshell when both of the actors seem upset due to any past confliction or issue.

In the second trailer of the drama Saraab, the viewers are overwhelmed with goosebumps. The very first clip shows a close endearment between both the fellows. Sonya Hussain is asking the hero, Sami Khan, that whether he has talked to his parents or not? Sami Khan is replying in a romantic way that what is that about?

The scene suddenly renders into the first night of their marriage, and she promptly tugged off her hand from his hand. She is strangely asking to him that who is he? Sami Khan is grieved with the reaction, but the last scene literary stupefied the audience. Sonya Hussyn is walking out in the corridor with Sami Khan, and as the camera zooms out, he is actually busy on a cell phone.

As the title of the drama "Saraab" reveals itself the real concept of the story, all these scenes give a clear understanding. Saraab means mirage that can be defined as an illusion. Our minds create illusions by which we can see with the power of our belief while they never existed in reality.

The drama serial "Saraab" is gaining success day by day and is ranked among the top upcoming dramas in the Pakistan Drama Industry. Apart from the typical "Sas Bahu" topics, we are finally going to watch anything different and unique. We have blessed just one life, so we are willing to live it joyfully. Our full-of-tensed life demands intense relief, and for that entertainment, we switch on the television. We badly need these kinds of themes that can make us think about being optimistic.

This drama has made a mega-collection of likes before being launched yet. Sonya is seen posting on the post of the drama "Saraab" that no one dares to say her mad. There are no words to describe the actin of the best onscreen couple. Viewers are waiting for the thrilling drama serial!

What happens behind the camera in Saraab drama?

Like many Pakistani showbiz personalities, actress Sonya Hussyn also opened her own YouTube channel and found a new way to stay in touch with her fans.

Sonya Hussain, like actress Saba Qamar, Iqra Aziz, Javeria Saud, and other actresses, opened a YouTube channel a few days ago. Sonia Hussyn released the first video on her YouTube channel on October 16, in which she was seen talking to fellow actor Sami Khan on the set of the drama.

In the video, which is less than 20 minutes long, Sonya Hussyn told the fans that usually people watch dramas or they only watch the scenes shown through the camera, however, she will show the fans the scenes behind the camera.

“اُلفت بی بی کا youtube channel” ....💁🏻‍♀️ So here’s the first video of our youtube channel 🎬 Give us your feedback in the comment section and Stay tuned for more videos ♥️👍🏼 ( link in bio ) 🔝 #sonyahussyn #youtube #ulfatbibi

Sonya Hussyn's video was made on the set of her drama Saraab, in which the play's director Mohsin Talat also spoke. Sonya Hussyn and Sami Khan's drama Saraab has been airing on Hum TV since August this year.

In Saraab, Sonya Hussyn has played the role of a girl who suffers from mental illness.