The best movies with the living dead, for fans and for those who have never seen one and want to start. Zombie films, now a common notion, are born from Haitian voodoo mythology, they debut at the cinema with an old classic with Bela Lugosi, but they don't explode until George A. Romero reinvents the rules and places them within some of the best horrors of all time.

Fifty years later we're overrun with zombie movies: they're the easiest to shoot when you have just two coins, and to sell them you just have to invent anything - literally anything - and add “of the dead” in the title. It, therefore, becomes difficult to extricate yourself: for those who had only recently approached the genre, perhaps thanks to the mainstream success of The Walking Dead, here is an overview of the best around to get an idea of ​​how many things you can do and tell when you return from the dead.

I was undecided whether to start with this or The Mercenaries 3, but in the end, I thought that a place should be reserved for the now-classic Nazi zombie topos of which this gem from Finland is by far the most glorious representative. The original is very nice, but it wastes too much time before getting to the point: this may make you turn your nose up at the frequency with which it throws it into comedy, but it's a pure epic inspiration from start to finish.

Two boys wander around a shady abandoned hospital, find a zombie woman tied to a table, and make a strong and tender friendship with her. Ok no, unfortunately, that's not true. They decide to go there with extreme necrophilia. I swear. This is a story of growth and training, let's say more "particular" that you can come across, which chooses to tell about the problematic relationship between adolescents and sex in one of the sickest ways that can come to your mind, which in doing so does not resist temptation from black comedy and in the end it's still better than Gus Van Sant's movies.

Perhaps the problem is that in Italy after years of Dylan Dog we have become a little used to the vision of Tiziano Sclavi. So, when this transposition from his best-known novel came out, his surreal and poetic tone and his most surprising ideas reached us a few phone calls.

But the story of a cemetery guardian who, by dint of fighting corpses that get up, goes mad, gets used to it, falls into an increasingly hallucinated world, and ends up "getting on with work", is still one of a kind. Various memorable moments and abroad never fails to finish in charts of this type. Today it is not particularly impressive to tell it, basically, it is a classic found footage set in a building invaded by zombies and closed for quarantine with some uninfected still inside having to fight. But at the time he was among the quickest to grasp the explosion of both sub-genres and to do so with a pace, craft, and effectiveness that the vast majority of subsequent specimens didn't even come close to (including his own sequels).

Nothing particularly shocking in the plot, only Master Fulci who unleashes all his creativity and offers some of the most violent and memorable scenes of the entire genre, including a legendary clash between a zombie and a shark that anticipates the fashion launched by Asylum thirty years old. Moving.

Based on a novel, it is perhaps one of the most particular and ambitious zombie stories to be translated into images. In a small radio station, the host of a news broadcast finds himself having to tell about a strange homicidal epidemic that is spreading through the city live until he discovers that the virus spreads through words, rhetorical figures.

The most abused terms of the English language itself. And not only does the film manage to portray the situation perfectly, but it does so with extreme seriousness and constant tension, leaning on the charismatic proof of a gigantic Stephen McHattie. Very current. 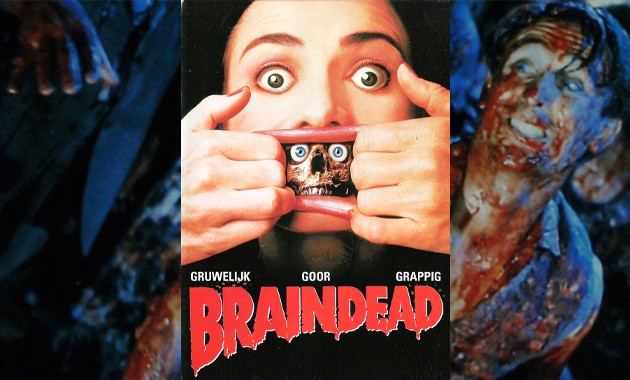 We will never tire of reminding you that Peter Jackson's true masterpieces are the low budget horror films he shot at the beginning of his career well before the Lord of the Rings, this is because 1) serious home video editions are urgently needed and 2) they have not aged by a day and are still very much copied today.

Here he is busy using a record amount of blood to tell of an oppressive mother-child relationship made even more complex, violent and hilarious by a zombifying virus. And he even bothered to set it in the 1950s. In the sub-streak of splatter comedies, it's still unsurpassed.

Crippled by an Italian prison title (in original it is Shaun of the Dead), he is actually the definitive responsible for the resurrection of the zombie vein: the one who fully embraced George Romero's lesson, satirical metaphors included, and slipped it into a highly inspired comedy that launched dozens of clones.

He let the (rest of the) world discover the talent of Edgar Wright, Simon Pegg and Nick Frost, but sadly he also convinced several other idiots that putting zombies in your own fluffy and generic hipster love story was the move that would save them.

Sure, George Romero, but until recently if you asked the average viewer to talk to you about zombies, at a certain point they would say "Mmm ... Brain ...". And Romero's zombies didn't speak. No, the brain-hungry zombies, those who are not enough to shoot in the head but must be completely dismembered, come from this immortal cult by Dan O'Bannon, irreverent genius scriptwriter of Alien and Act of Force, who, not being able to make a direct sequel to the Romerian classics inserts them into his mythology as "taken from a genuine story" and releases the undead against a gathering of troublemakers. It is still an energetic and irreverent experience like few others.

Zombies wins as proof of maturity for Romero, still the definitive film of the genre to this day, the one that carved the definitive rules in marble and as long as there were not bad satirical digs that at the time, in horror, were not very frequent. If you're fasting on zombie movies, catch this one up. Then look at it again. Then look at it again. At that point, you can proceed onward to the others.

The 20 Richest Bollywood Actors of the Year 2021

Top 10 Most Expensive and famous Chocolates in the World

Top 10 Adventure Hollywood Movies [Must Watch Once in Life]

Top 10 Famous Hollywood War Movies of All the Time