Top 10 Most Expensive and famous Chocolates in the World

Chocolate is one of the most famous desserts in the world. Not only has it been around for hundreds of years, but it is also one of the most adaptable dessert delicacies. Chocolate is available in a variety of tastes, and it is not only tasty, but it may also be beneficial to your health in several ways, including the release of chemicals into your system that calm you and provide a natural high. Chocolate may range in price from very reasonable to exceedingly costly, depending on the type of chocolate and the brand. Devotees of chocolate may be prepared to pay any fee to obtain the best-of-the-best, but how much would that cost? If you've ever wondered how much the pricey chocolates cost, keep reading to find out how much the top ten most costly chocolates cost. 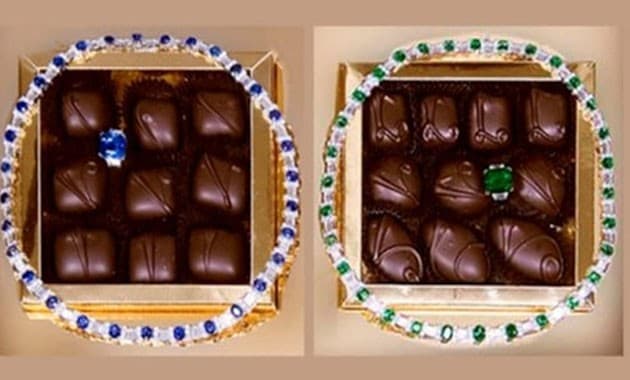 Le Chocolate Box is regarded as the most costly in the world. However, we believe it squeaks through owing to a technicality. While it does include a variety of Lake Forest Confections chocolates, the hefty price tag is primarily due to the accompanying Simon Jewelers necklaces, bracelets, rings, and other jewels.

Le Chocolate Box was primarily a promotional effort, and it is no longer available for purchase at any price. However, it is still the uncontested king of high-priced confections. 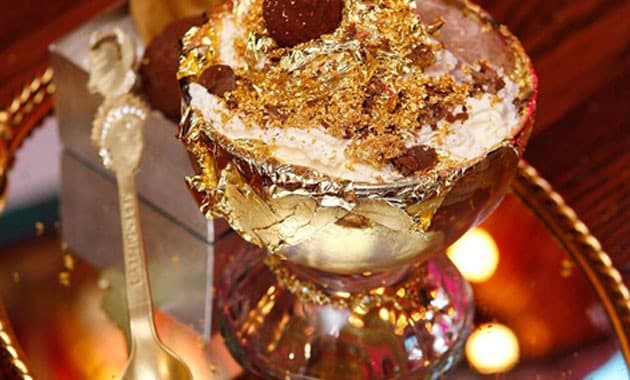 This $25,000 chocolate sundae was manufactured to advertise the New York eatery Serendipity 3 and is another of the most costly chocolates ever found. It also broke the Guinness World Record for the Most Expensive Dessert along the way.

It's made with a 28-cocoa mixture and five ounces of edible 23-karat gold, and it's served in a gold cup with white diamonds.

Is it possible to order a Frrrozen Haute Chocolate from Serendipity 3 over the phone? Although the campaigns were likely discontinued years ago, it remains a legend in the world of high-end chocolate. 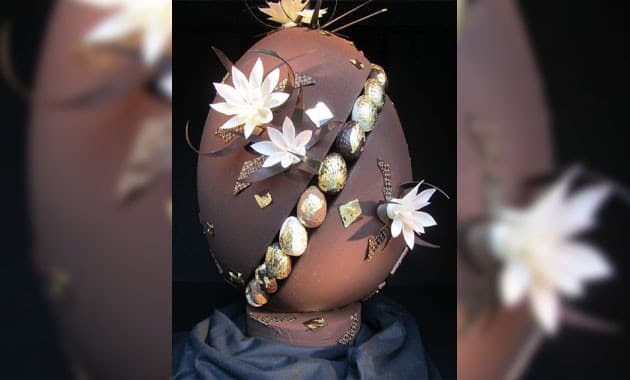 This egg was named the "most costly non-jeweled chocolate egg" by Guinness World Records, illustrating a category for everything. This golden speckled egg sells for $11,107, weighs more than 100 pounds, is 3 feet high and 5 inches wide.

Seven chocolatiers from the UK and Japan collaborated to produce it. Amedei chocolate was utilized, as well as edible gold leaf and a couture chocolate filling. It was also embellished with 12 chocolate mini-eggs, 20 chocolate bars, and five white chocolate flowers.

Because the auction took place in 2012, you won't be able to purchase this egg now. However, there is some good news. The auction's revenues were entirely donated to charity. 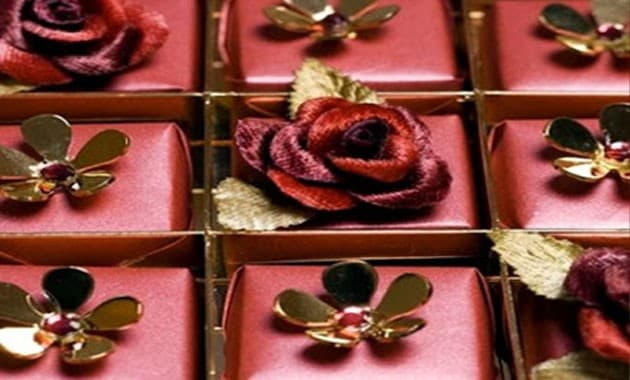 Patchi, a Lebanese chocolatier, and Harrods, the world's most prestigious department store, collaborated in 2010 to develop these Swarovski Studded Chocolates. Each of the 49 dark chocolate pieces is covered with gold and silk rose and decorated with Swarovski crystals. After that, they're wrapped in Indian silk and stored in a leather box.

The $10,000 chocolate box is no longer on sale, but Patchi, the world's most famous chocolate shop, is still going strong. They provide a large selection of chocolate treats, including the option to create your chocolate box for roughly $150. 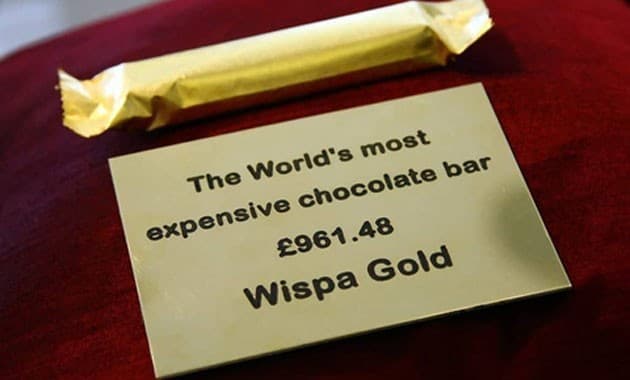 Cadbury, the world's most famous chocolate business, decided to reintroduce the Wispa Gold Bar in 1995. So they produced a unique Wispa Gold Bar worth $1,600 to help market the occasion. It was built with high-quality Madagascan cocoa beans and edible gold leaf.

The one-of-a-kind treat was auctioned off, but the lucky bidder never showed up to claim their prize, so the bar was returned to Cadbury. It's now on display in their Cadbury World chocolate museum, and cheaper replicas of the bar can be found in stores all around the world. 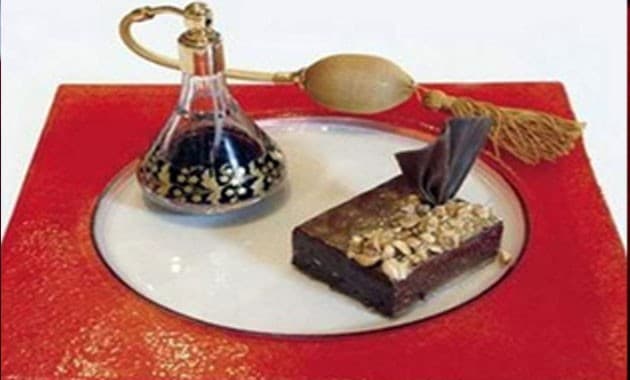 This dark chocolate brownie is served with a rare port wine in an antique-looking atomizer as its container at the Brulee dessert restaurant. However, what makes it genuinely omg-worthy is the $1,000 price tag. What makes this premium brownie so unique? The price isn't due to the delicious dark chocolate brownie with Italian hazelnuts. Its inclusion on this list is due to the $750 St. Louis crystal atomizer loaded with a shot of rare 1996 Quinto do Noval Nacional port wine. 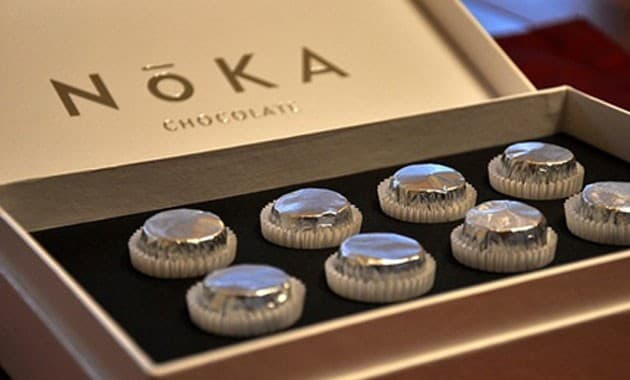 Noka Chocolates is a firm established in the United States that Canadians own. The Noka Vintages Collection costs around $854 USD for one pound. Selected farms in Venezuela, Trinidad, and Ecuador provide delectable cocoa. This chocolate contains 75% of a costly type of cocoa, as well as additions such as cocoa butter and sugar. One of the purest forms of chocolate available, with no emulsifiers or flavorings, added. 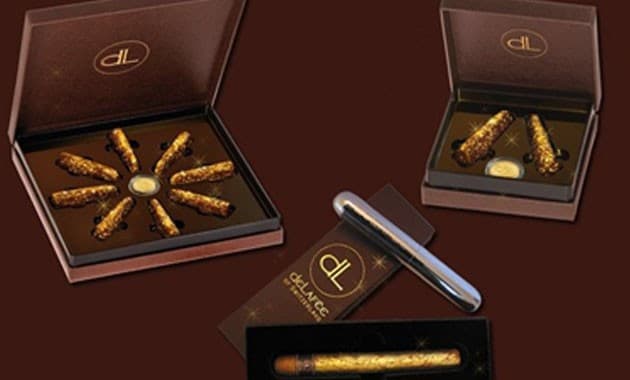 These DeLafée pralines take the notion of rich-tasting chocolate to a new level by highlighting it with actual, edible 24-karat gold. In addition, a solid, non-edible Swiss gold coin from 1910 to 1920 is included in the package of eight chocolate-and-gold pralines.

Even the creator confesses that gold has no flavor, but it gives dark chocolate a warm glow. It is a good treat for the eyes as well as the taste sense.

For an eight-praline bundle, The price is $517 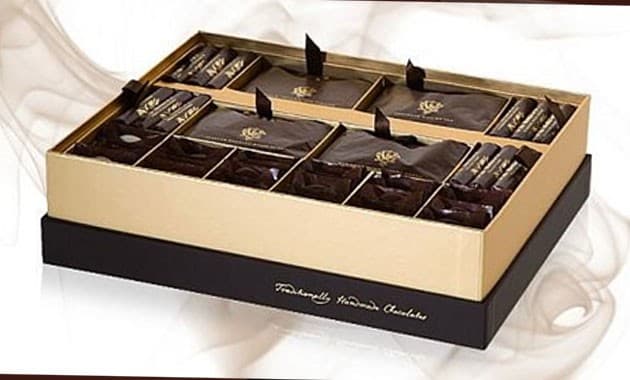 If you're a chain smoker who also enjoys chocolate, this chocolate from House of Grauer, a Swiss chocolatier, is well worth your money. These chocolates are wrapped in cigar leaves and have a deep, smokey cigar scent without the harmful effects of smoking.

Wrapped in cigar leaves, this chocolate is a rare blend of the best beans, such as Hawaiian Kona Coffee Beans, and best-in-class ingredients, such as Japanese Matcha Tea, Turkish Star Anise, and French Organic Bee Pollen. Furthermore, this chocolate comes in various flavors, including milk chocolate, roasted nuts, and even hazelnut. 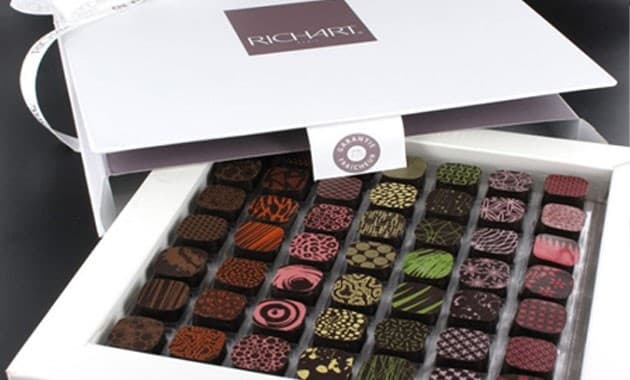 Richart chocolate was founded in 1925 in Lyon, France, and has since expanded to over a dozen locations in the United States, Europe, and even Tokyo. Richart is known for its decadent dark chocolates, which are made from beans obtained from Madagascar, Haiti, and Venezuela and come in various tastes ranging from floral to fruity, citrus, herbal, and spicy.

The unique occasion assortments, which come with miniature chocolates each buried underneath a chocolate plaque with an etched message, are a chocolate lover's joy! Envol ballotin is another well-known Richart product with roughly 49 cubes of dark delights and a hand-crafted cocoa butter pattern.

Chocolate is more than just delicious desserts. Chocolate becomes a work of beauty in the hands of a professional chocolatier. Fortunately, you don't have to spend a million dollars to appreciate the world of chocolate properly. Many of the above-mentioned famous chocolate stores have creations that are significantly more cost-effective. So if you're ready to expand your horizons a little, you'll discover a world of chocolate delights.