The Zainab Alert app, which helps experts in the search for missing children, was launched by experts in collaboration with the Sindh Police and Citizen Police Liaison Committee (CPLC), though it was initially launched in March this year.
However, it is now available on Google App and Apple App Store with new features.

The Zainab Alert app was developed by Invent Lab
And Invent Lab was assisted by Sindh Police and CPLC in developing this app and making it available to the public. 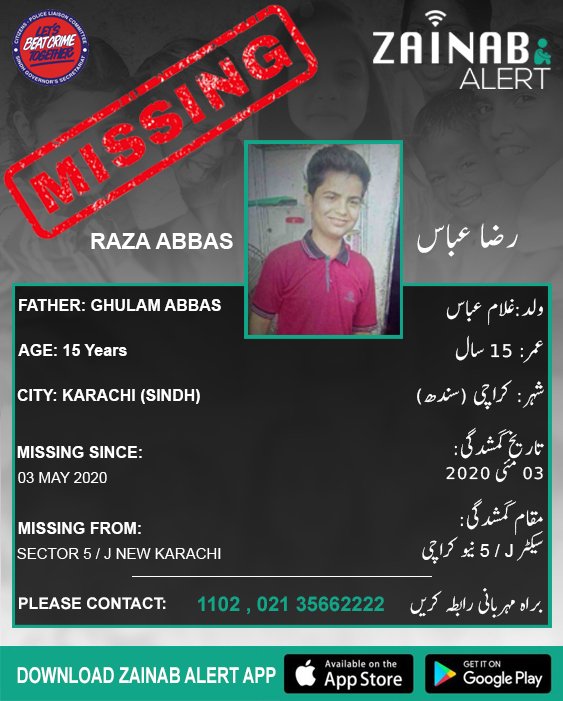 The app is especially helpful in locating missing children. The app is also available in major languages ​​of the four provinces, namely Punjabi and Pashto, including Urdu and Sindhi.
And it can be downloaded to any kind of smartphone and take advantage of its convenience.

Although Zainab Alert App has been praised by some showbiz personalities and social leaders in the past,
But recently, actresses Sanam Saeed and Hina Dilpazir, in collaboration with Sindh Police and CPLC, also shared messages on social media regarding the use of the app.

The two actresses had appealed to their fans and the general public not only to use the 'Zainab Alert App' themselves but also asked the fans to inform their close relatives about the said app so that the missing children could be rescued. Finding as soon as possible can provide comfort to parents.

Related Posts
Samsung Is Working on a 600-megapixel Sensor Camera
Competition Commission of Pakistan (CCP) approves merger of Uber and Cream
The World's First Laptop With 3 Webcams
Record reduction in toxic gas emissions as a result of coronavirus
There is a clear difference in the number of men and women using mobile phone in Pakistan
Tecno Brings a “chottie Eid, Bara Jashan” Super Ramadan Offer for Fans
Motorola introduces his first 108-megapixel camera phone
realme launches 64MP Ultra-Nightscape camera phone, realme 7i in Pakistan along with a designer toy ‘realmeow’