Why does Mark Zuckerberg consider Tik Tok a real threat?

Facebook founder Mark Zuckerberg made it clear last year that he didn't like Tik Tok, but now it's clear why he's worried about the Chinese app.

In fact, the popularity of Tik Tok is also growing so fast that Facebook's problems are understandable.

According to online company Censor Tower, Tik Tok was downloaded more than 80 million times in 2019 and beat Facebook, Messenger and Instagram in this regard.

Just one app loads more than Tik Tok, which is a Facebook-owned application, the WhatsApp.

Tik Tok has been downloaded more than 65 billion times so far, censor tower said in a blog post, and the 2019 figures represent 44% of it.

Certainly, it is not a dynamic user downloader, but statistics indicate the popularity of the application has increased, especially in China, where Facebook is not allowed to work. 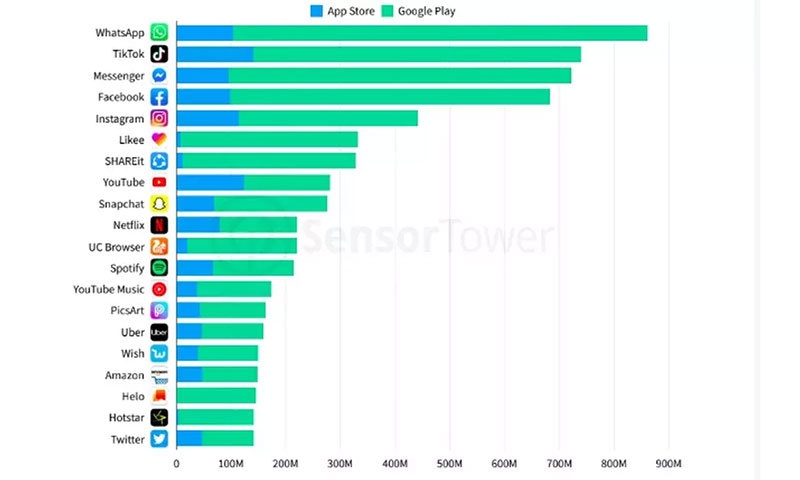 Photo courtesy of Sensor Tower
In China, Tik Tok is known as Devine, which is the second-largest market for bait dance in the United States.

Facebook's concerns can be gauged from the fact that it copied some of Tik Tok's features into its own apps, but introduced a similar app for Instagram.

The app called Rails was introduced in Brazil in November last year, giving users 15 seconds of video service that can be decorated with music and shared as stores, but also soon to be a part of Instagram Explore. New rails section is also likely to be introduced.

Brazil has been chosen by Instagram because this app is very popular while Tik Tok is currently not widely used, while music is highly preferred in Brazilian culture.

Instagram has adopted this same strategy, targeting Snapchat and introducing stores where Snapchat was not present.

Instagram also favours the US government over Tik Tok as the Tik Tok is being scrutinized by US officials.

Be aware that Chinese company Bait Dance bought App Musical in 2017 for a billion dollars and then turned it into a talk show (Facebook tried to buy it, but failed), which is fast becoming a worldwide phenomenon. I became popular.

Mark Zuckerberg has called for a bait dance scrutiny and said 'our services such as WhatsApp are used by protesters and social workers worldwide for encryption and privacy protection while Tik Tok. Which is becoming increasingly popular in the world, it is said that it censors demonstrations, even in the United States.

Corona does not discriminate on the basis of religion, Narendra Modi

Related Posts
The student just discovered a new planet on the third day of the internship
Honor has introduced Honor play 4 and play 4 pro, Check Specification and price in Pakistan
How to Use a Virtual Number on WhatsApp | Create WhatsApp Without Using Phone Number
Facebook and Instagram Users are having Trouble
TECNO to launch its first-ever Gimbal phone in Pakistan | TECNO CAMON 18
Tecno Pova Neo Now Available in Pakistan
realme 7 Pro with 65W SuperDart charge now offered for PKR 49,999 only
Facebook Messenger redesign once again