The microblogging site Twitter has removed a video shared by US President Donald Trump's promotional team in tribute to George Floyd, a black American man killed by police last week, over copyright.

A less than 4-minute video shared on Donald Trump's official Twitter account, Team Trump (Text TRUMP to 88022), pays tribute to the black American George Floyd who was killed by police.

According to the news agency Reuters, the official of the micro-blogging website confirmed the removal of the video shared by Donald Trump's advertising team and said that the said video was removed after a copyright complaint. 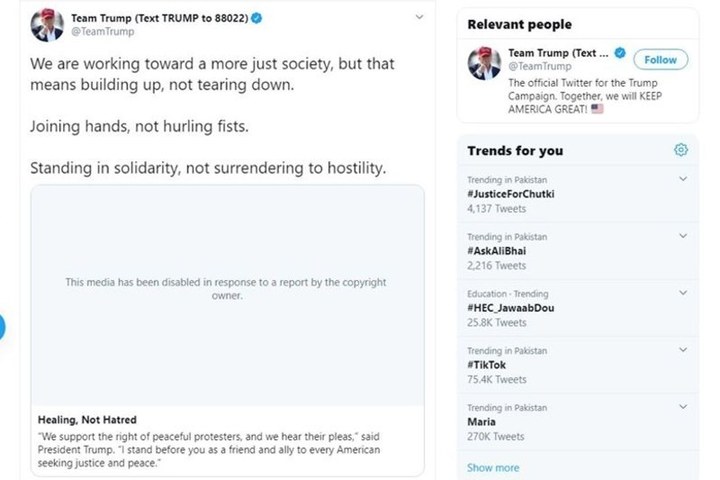 The Twitter administration did not say where it received the copyright complaint from the video, but the video was immediately removed from Twitter.

After the video was shared on the official account of the advertising team, it was retweeted by Donald Trump and his son, Jr. Donald Trump, while it was also retweeted by dozens of other people.

The video shows protests over the death of George Floyd, who was killed by police, as well as a public tribute to him.

Behind the scenes in the video, Donald Trump's voice can be heard expressing his sorrow over the death of a black American man, including calling it a tragic event.

Interestingly, while the video has been removed from Twitter, it is now available on Donald Trump's official YouTube channel and has been viewed more than 100,000 times by the afternoon of June 5.

YouTube has not yet commented on the video's copyrights.

The Role of Oppressed Siski Woman Can No Longer Be Played, Sarwat Gilani