If you want to buy a laptop instead of a foldable smartphone, Lenovo's ThinkPad X1 Fold is a must.

Its concept design was introduced in May last year, and at the CES Technology Show in Las Vegas, the company announced that consumers will be able to buy it for $ 255 by the middle of this year.

The laptop is equipped with a 13.3-inch TKP LED display, with a stainless steel foil that protects the screen from scratches and a special coating on top.

But even so, the screen is so soft that it easily folds and unfolds.

In its full-fledged form, the X One Fold becomes like a tablet on which movies can be viewed and web browsing.

On minor folds, it is possible to view on different content screens simultaneously using split-screen mode.

The company has a 5 megapixel IR camera on top of the display while navigation or notes can be made from the Active Pane to the laptop, along with Dolby stereo speakers.

When folded fully, the bottom can be used as a laptop keyboard while the upper one serves as a monitor, with a stand built-in inside the case on the back of the device.

Along with the laptop, there is also a physical mini-keyboard that can be mounted down so that the desktop experience can be given to the user and when folded, the keyboard can be placed in front of the display while using the mouse is possible.

When folded like a book, it becomes so spacious that a keyboard can be inserted that becomes a sandwich between the two displays and can be charged in the same state when not in use. 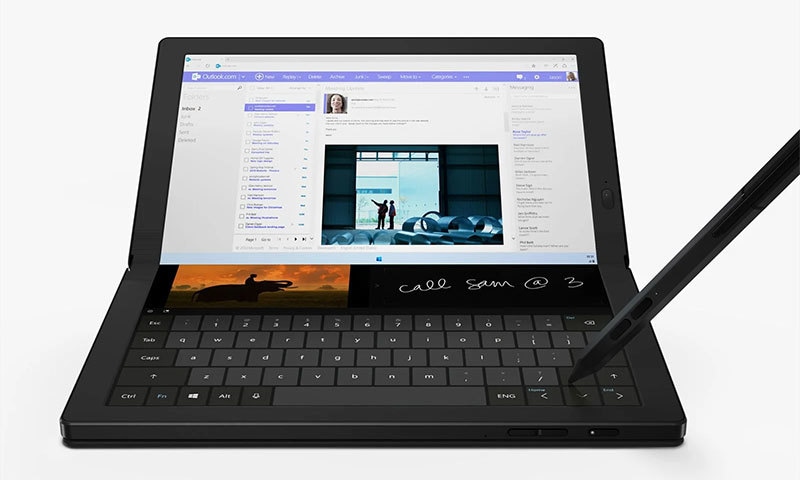 Photo courtesy of Lenovo
It will be given a Windows 10 Pro operating system, while the company has not specified details about the processor, but it is likely that it may be an Intel Lake Field processor.

In addition, Intel UHD Generation 11 graphics card is also part of it and will have 8GB to one TB storage options.

It has a 50-watt battery that will work for up to 11 hours on a single charge and has rapid charging support.