Hackers began to exploit the fear of the Coronavirus

Hackers are being used worldwide to exploit the new Novel Coronavirus epidemic and technology companies are taking steps to prevent them.

Now Google has announced that it has blocked more than 18 million suspected emails daily in Gmail over the past week.

Google said in a blog post that these emails contained malware or malicious links and were separate from the 24 Crore spam emails the company has been seeing on a daily basis.

The blog states that some of these emails are intended to intimidate and incentivize consumers to force an immediate response.

Some emails give the impression that they belong to a government or international organization such as the World Health Organization so that the user can donate the funds to the fraud hackers or install the malware.

Some emails try to trick small businesses through financial packages, and other hackers try to steal personal details from homeowners. 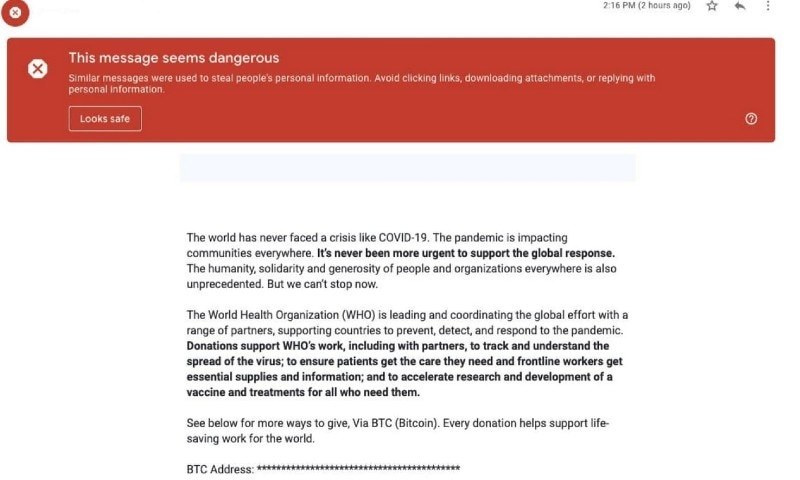 One such email sample, Photo courtesy of Google
Google says that our machine learning models are working to understand and filter out these threats, and we're blocking 99.9% of spam and malware emails from reaching consumers.

The company has warned consumers that although it is blocking most emails, it can still reach a certain number of messages, in which the Packers take advantage of the fears and uncertainties surrounding the outbreak.

Google recommends not downloading files from unknown persons' emails and trying to confirm the authenticity of a link before clicking on a link, and avoid providing login details in any case.

Internet security experts have already said that hackers can be used to take advantage of the Coronavirus crisis, and worldwide hacking risks have increased by 20% in a month.

So far in the United States alone, people have lost more than $ 2 million online through Coronavirus fraud.

Related Posts
Fear of spreading Coronavirus, people set fire to the 5G towers
Google has further improved call quality in its video chatting app
"Dangerous Rumors": The Corona virus has become a nightmare for social media
Samsung has introduced a new Galaxy M series phone Galaxy M21
The US military has banned the use of the popular mobile app, 'Tik Tok'
Hamas hacked Israeli soldiers' phones with pictures of girls
Zynn An app like TikTok that offers cash prizes for watching videos, Download Now
The Major Change in Whatsapp Good News for Users