Coronavirus: The smartphone market suffered its worst decline in history during the first quarter of 2020

The smartphone market suffered its worst decline in history during the first quarter of 2020 as a result of the new novel Coronavirus epidemic.

According to Gartner, a company that monitors device sales, sales of smartphones fell 20.2 percent in January-March compared to the same period last year.

The report said that the Coronavirus epidemic, which started in December, affected the manufacture and sales of devices of several companies in China and then the virus spread around the world and succeeded in affecting the sales of smartphones. 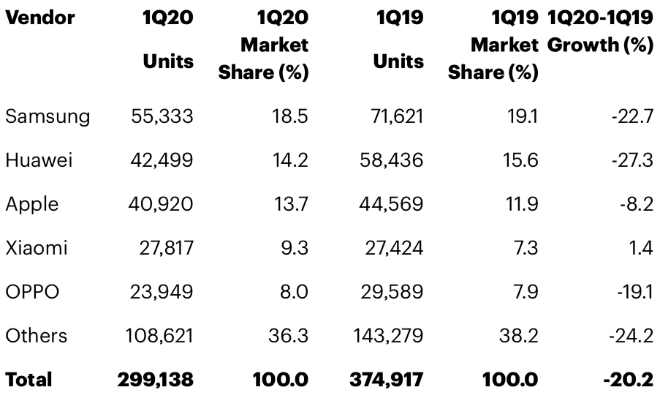 Samsung sold the most phones in the first quarter of this year, with more than 55 million and a market share of 18.5 percent, but the South Korean company lost 22.7 percent compared to the same period last year.

Huawei also came in second with a 14.2% share, selling more than 42 million phones, but lost 27.3% during the quarter.

Along with the Coronavirus epidemic, the Chinese company also experienced the biggest decline in phone sales as a result of US sanctions.

Apple is third with 13.7% and sold more than 40 million iPhones, but device sales fell 8.2% during the quarter.

According to the report, Apple's ability to sell devices through online stores and production to return to normal by the end of March did not significantly reduce Apple.

Xiaomi is the only company in the top five that saw a 1.4% improvement in phone sales, ranking fourth with 9.3% market share, selling more than 27 million phones during the period.

Oppo lost 19.1% in the first quarter, but with an 8% market share, it is among the top five companies.

Sales of other companies' phones fell 24.2 percent during the quarter.

Gartner said in a report last week that global sales of desktop computers, tablets, and mobile phones are expected to decline by 13.6% by 2020.

According to Gartner's forecast, 1.9 billion devices are expected to be sold this year.

The company also predicted a 14.6% drop in mobile phone sales.

According to the report, "although there has been an increase in consumer contacts with office mates, friends and family during the lockdown, fewer people will prefer to buy new phones as a result of declining income."

9 more Corona virus cases confirmed in Karachi in one day

Related Posts
Apple closed its stores in China After the outbreak of the Coronavirus
Up to 3 and a half billion people Don't have internet access
Corona Lockdown: An increase of about 16 million Netflix users
Twitter scared of Coronavirus, shuts down all offices, instructs employees to work from home
Google values money rather than human rights
Record usage in the use of Facebook app
All new Tecno spark 6 with G70 processor is soon going to hit Pakistani smartphone market
Hackers began to exploit the fear of the Coronavirus