According to the French news agency AFP, under this mission, China will build a space station in space in the future, then send the astronaut to the moon.

China's state news agency said in a statement that the Long March 5B rocket was launched from the Wencheng launch site on the southern island of Hainan.
And in 8 minutes, the prototype spaceship successfully separated from it and entered its intended orbit.

The agency added that a test version of the cargo return capsule was also successfully detached from the rocket.

The report added that the spaceship will one-day launch astronauts into space and that China plans to complete the project by 2022, after which the next target of the spaceship is the moon.

There is room for a team of 6 people in this spaceship.

The return of the spaceship and capsule is expected by Friday after the completion of the test flights, China Ming Space Agency's G. Kimming told a press conference. 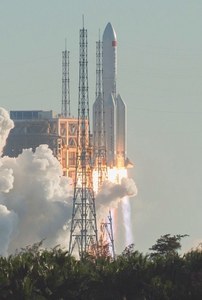 Remember that the United States is the only country that has successfully sent humans to the moon.

But China has launched a major campaign and its intentions are far from the moon. The March 5B sent into space by China is 54 meters long and weighs 849 tons.

However, Beijing is also very active in this regard, and in addition to sending astronauts into space, satellites have also been sent into orbit.

According to the World Bank's Pakistan's ranking has improved

If arrested I will be more dangerous

TECNO officially announced the launch of Phantom X in Pakistan