Wasim Akram: I Will Swim Next Time Wearing Three Piece Suit or Ghaghra

Former cricket legend Waseem Akram has termed the critics of one of his videos on social media as cowards and at the same time has sarcastically said that he will swim in the next three-piece suit or else he will wear a ghagra.

Yesterday, Waseem Akram shared a video on Instagram in which he was present in the swimming pool, but his video was criticized by some people. In response, Waseem Akram released a video in a tweet on the social networking site Twitter and also wrote that this morning this video is especially for trolls and rude people.

"Before someone says don't ignore the answer, I will definitely do it after this video," he said. In his video message, Waseem Akram said, "We all aim to live a healthy lifestyle. I will soon be 55 years old and I try to stay healthy. You should do the same."

Waseem Akram said that the people who criticize Facebook and Instagram are cowards, the cowards are rude, it shows what their background is. In the video message, he added, "I sympathize with the elders of such people. What would they think?"

Morning this video is specially for trolls and rude people before everyone says do not reply to them ,ignore them sure will do after this one #saturdaymorning #haveablessedday🙏 pic.twitter.com/1dcqRIqNso

He said that some people said that you came to the swimming pool without a shirt while you are a Muslim. Waseem Akram further said that it was a mistake, brother, next time I will wear a three-piece suit if he doesn't like it. At the end of the video, Waseem Akram said sarcastically, "Don't think before you speak and write."

Later, while retweeting this video of Waseem Akram, his wife Shanira Akram shared a photo of cricketer Shoaib Malik in a three-piece suit and asked if he would swim like this.

Hahahahahah. LOL. @wasimakramlive at his best. In swinging Yorker. 😂 https://t.co/fp1vMQjkBe

In addition, singer Ali Zafar wrote that Waseem Akram in his best style.

@wasimakramlive still bowling deadly Yorkers and bouncers.....trolls are poor souls, mostly without any real purpose in life, mostly radiating their own failures in life through fake IDs . Let us pray for them skip. Look fed to your ghagra photos. https://t.co/Qstw4xXZnJ

Singer, actor and host Fakhr Alam wrote on Waseem Akram's video that most of the trolls have no purpose in life and reveal their failures through fake IDs. At the same time, Fakhr Alam wrote that he is waiting to see your pictures in Ghaghra.

It may be recalled that Waseem Akram had recently shared a photo with his 5-year-old daughter, Aila Akram, on social media.

However, in a comment from a user, he criticized his daughter's dress and wrote that the girl should dress nicely. 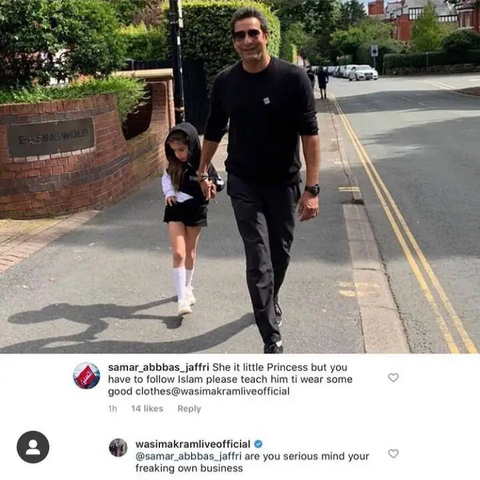 To which Waseem Akram had sternly replied that he should do his job.