Currently, many countries have official regulations on the possession of potentially dangerous dogs. For this reason, it is increasingly common for people to ask themselves, before adopting, which are the most dangerous dogs in the world, especially when it comes to robust dogs whose presence is impressive at first sight.

This type of classification generates a great deal of controversy, as a dog's conduct is not determined by its breed. Nevertheless, even if the genetic heritage can affect a dog's temperament, the socialization of the puppy and the education given to him by his tutors are the most determining factors in his growth. For this reason, instead of promoting stereotypes about certain dog breeds, the important thing is to raise awareness of the need to educate and socialize dogs early, apart from taking care of them so that they are always in good health.

On behalf of Animal Pedia, we would like to emphasize that we do not consider that there are "bad" or "dangerous" dogs by nature. Any dog, regardless of its breed, gender, age, or lineage, can manifest aggressive behaviors and go so far as to pose a risk to other individuals, when he is the victim of irresponsible management by the tutor, and/or when he has been subjected to a negative environment in which he cannot develop with security and trust. 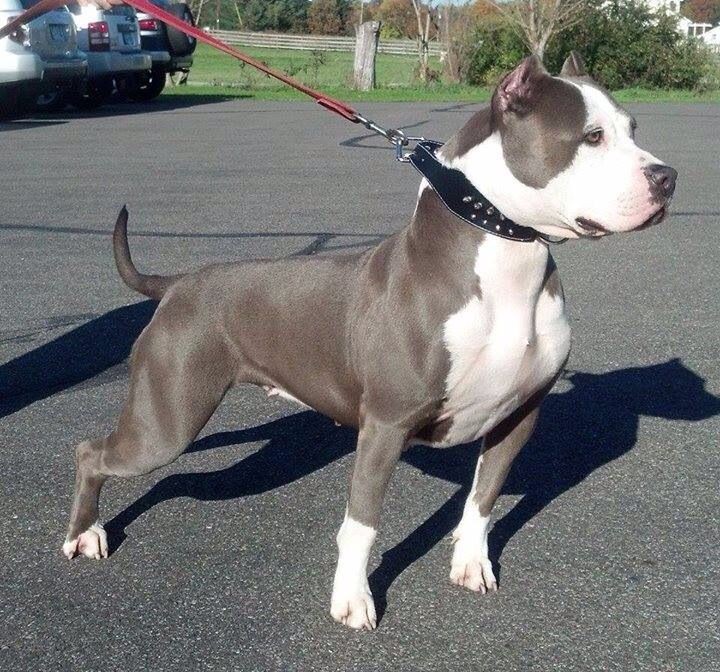 Unfortunately, Pit Bulls are the ones that have suffered the most from bad publicity and are considered to be the first of the potentially dangerous dogs. This fact is due in most cases to irresponsible management by the guardians.

The American Pitbull Terrier (APBT) is one of the best-known breeds in the world. Despite the multitude of myths about Pitbulls, it is a friendly, active, fun, and balanced dog who likes to feel welcomed and loved by the family. When raised and socialized as puppies, they can get along well with children and coexist peacefully with other animals.

A study carried out by the American Temperament Society, in which more than 400 dog breeds were analyzed, revealed that the APBT is one of the most tolerant dogs. The results of the tests that emerged are very similar to those of dogs considered "stable and family", such as the Golden Retriever and the Beagle.

Due to its size, muscular and massive body or its powerful jaw, the Rottweiler is considered one of the strongest dogs in the world. However, his important presence hides a calm, confident, very courageous, and loyal character to his tutor. These dogs generally create a very special bond with the family, which will be defended with noble courage.

Its morphological characteristics and irresponsible possession by many guardians have meant that the Rottweiler is considered a potentially dangerous dog in Italy and many other countries. Nonetheless, he is one of the 10 most intelligent and obedient dogs in the world. Its safety facilitates training and training. 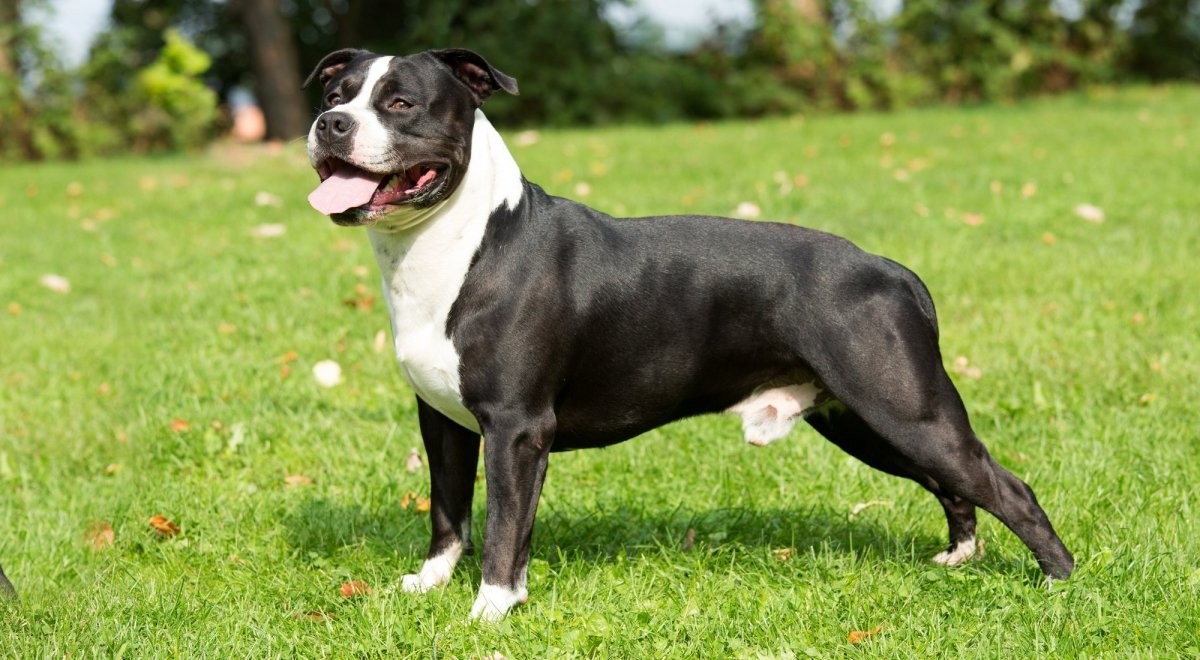 The American Staffordshire terrier, also known as Am staff, maintains a close relationship with the Pit-bull. In the same way as with the Staffordshire bull terrier (or "staffy") and the Bull Terrier, which also appear in the list of the most dangerous dogs in the world?

Some of these Bull breeds were created to participate in dog fights, an experience which has contributed to their present-day "bad name". Nonetheless, when properly socialized as puppies and properly educated through positive reinforcement, these dogs exhibit balanced behavior and learn to respect house rules to coexist in harmony with the family. The Fila Brasileiro is one of the most well-known Brazilian dog breeds worldwide, both for its build and for forming part of the list of the most dangerous dogs in the world. These dogs have strong personalities and a somewhat complicated temperament, but that doesn't mean they are aggressive. A behavioral problem, such as aggression, should not be confused as a characteristic trait of a breed's personality.

In its family nucleus, the Fila Brasileiro is an affectionate and devoted dog, and also shows great patience and tact with children. In front of the presence of strangers, however, these dogs are distrustful of their strong territorial and protective instinct. For this reason, it is a dog breed recommended for those experienced guardians, who have the time and patience to offer it an excellent education, from the first months of life. The socialization at a young age will be key to the adult behavior of a row, will allow him to relate positively with individuals and stimuli around him. 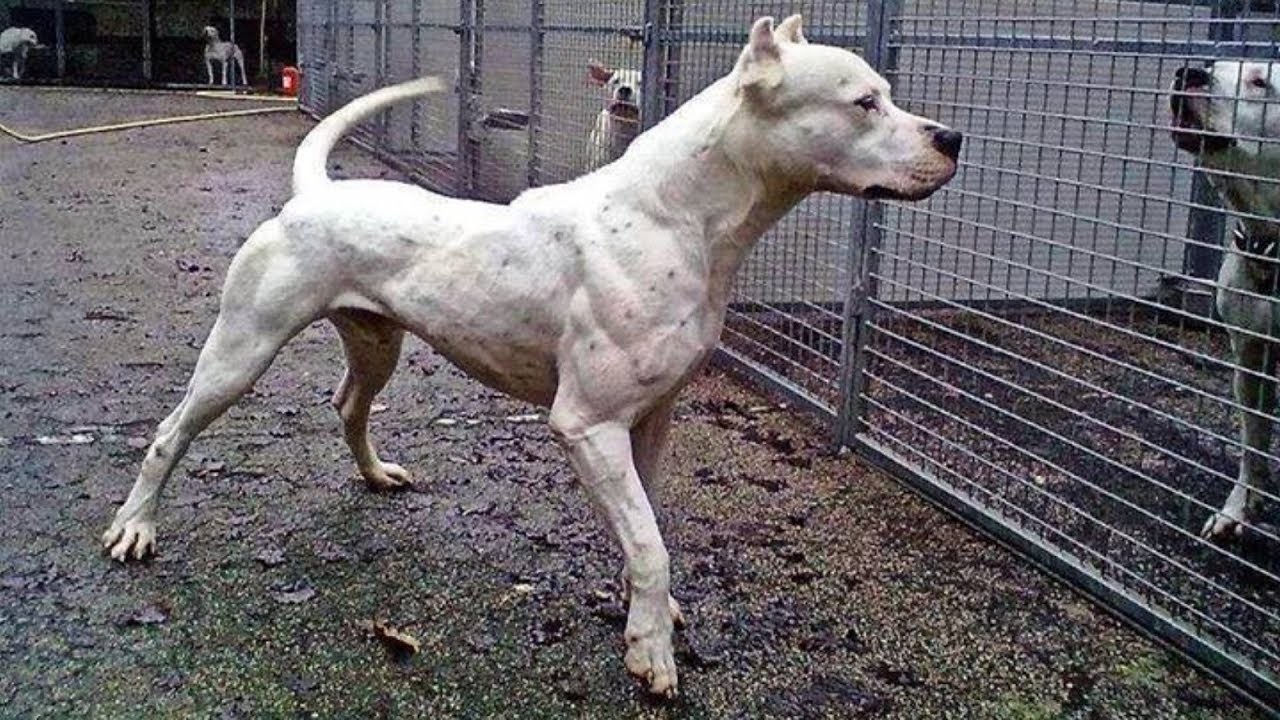 The Dogo Argentino is the only Argentine dog breed that is not extinct. This Dogo-type molosser attracts attention for its powerful appearance, with well-developed musculature and its completely white coat (although some darker colored spots around the eye are admitted, which must not exceed 10%. of the head surface).

The ancestors of the Dogo Argentino are the now extinct Perros de pelea cordobés( Cordobese fighting dogs), which were widely used in dog fights in the Argentine province of Cordoba during the early 20th century. Nevertheless, Dr. Antonio Nores Martinez decided to cross them with other breeds to maximize their strength and endurance and improve their character stability. This breed is supposed to be influenced by the English Pointer, Great Dane, Bull Terrier, Boxer, English bulldog, and Pyrenean Mastiff among others.

Despite its past as a fighting and hunting dog, the Dogo Argentino has adapted very well to the companion dog routine due to its affectionate and faithful temperament. These animals create a very special bond with their tutors and family, who will protect and adore with their characteristic kindness and courage. When they have the opportunity to be socialized from an early age, they are very patient with children, with whom they will play for a long time, and will be tolerant of other animals. 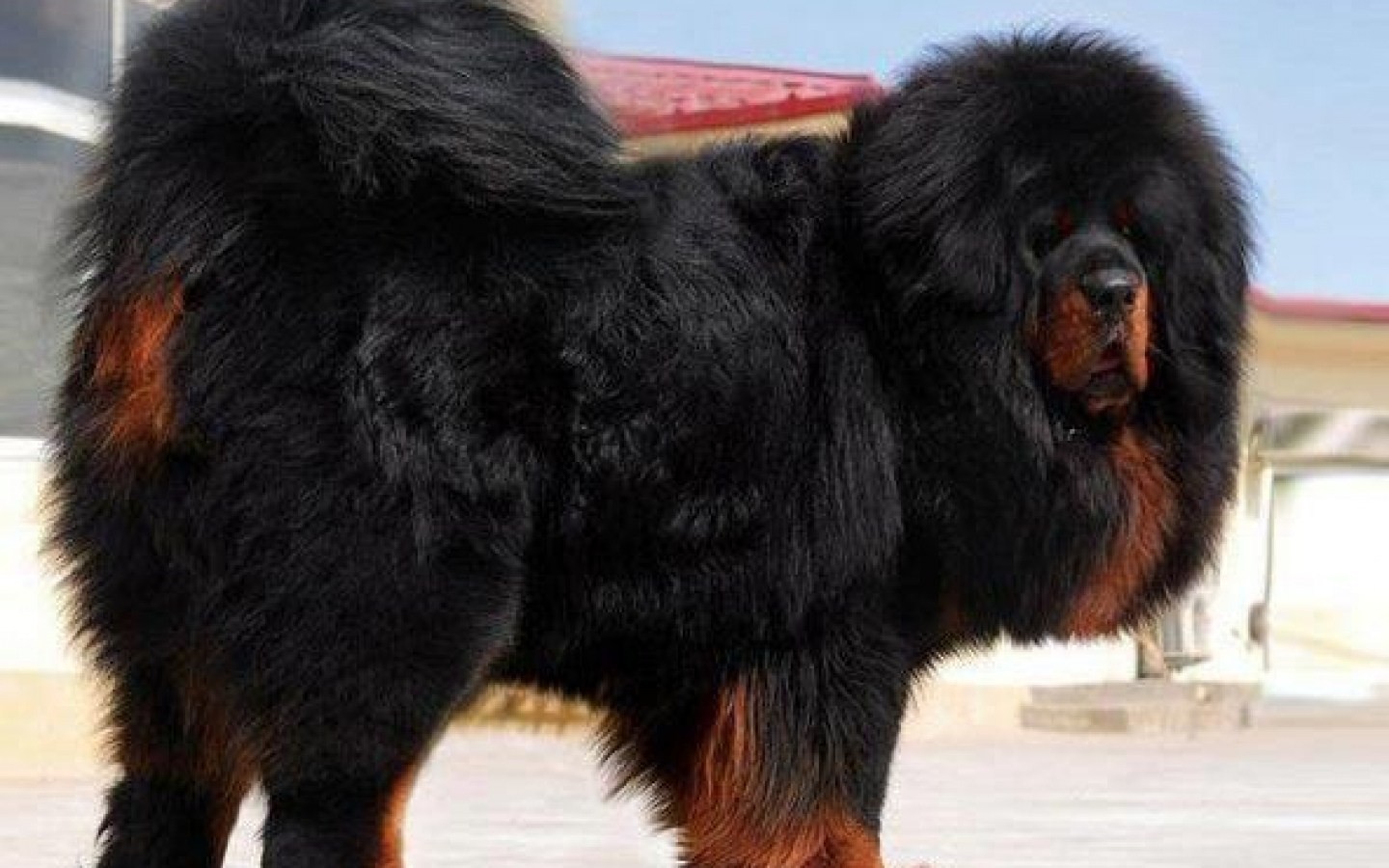 The Tibetan Mastiff or Tibet Dogo is a very ancient giant dog, whose birth is associated with the ancient nomadic shepherds of the Himalayas and the monasteries of Tibet, where they used to be trained as guard and protection dogs. Its strength, robustness, and thick coat are probably the most striking characteristics of this dog breed, the official standard of the FCI defines them solemnly and of majestic strength.

If you are considering adopting one, you will need to know that the Tibetan Mastiff is an independent dog. This does not mean, logically, that he does not enjoy the company of his guardians or family. On the contrary: he is a quiet dog, whose protective spirit makes him extremely loyal, even if he will never be a "submissive dog". We will have to respect its autonomous character. Socialization at a young age will be key for the Tibetan Mastiff, as, due to its past as a guardian, it tends to bark a lot and to be territorial. The Dogo Canario is a Spanish dog breed that is considered the national symbol of the island of Gran Canaria. As early as the 18th century, these native dogs were crossed with Bull-type dogs brought from England. It is believed that the current standard is very far from the original Canarian Dogo.

In this case, we are dealing with a very large, quiet dog, which in the past was selected and developed as a fighting dog. We also talk about a shy dog with strangers, but loyal to their tutor. It generally has an independent character, a characteristic that we must respect, without however neglecting its socialization and education. The Mastiff is a very popular dog breed, original from Great Britain. At first, they were raised to help foresters and protect themselves and facilitate their work. Their good results contributed to their popularity growing so rapidly and that they began to be trained as a guard dog for properties, homes, and families.

This is a large and powerful dog, whose presence may be intimidating to some strangers. Due to its origins as a guard dog, the Mastiff is a very protective dog, affectionate and loyal to his family, with a tendency to be cautious. for this reason, the Mastiff must be socialized correctly in the first months of life, and its adoption is recommended only for those more experienced tutors. 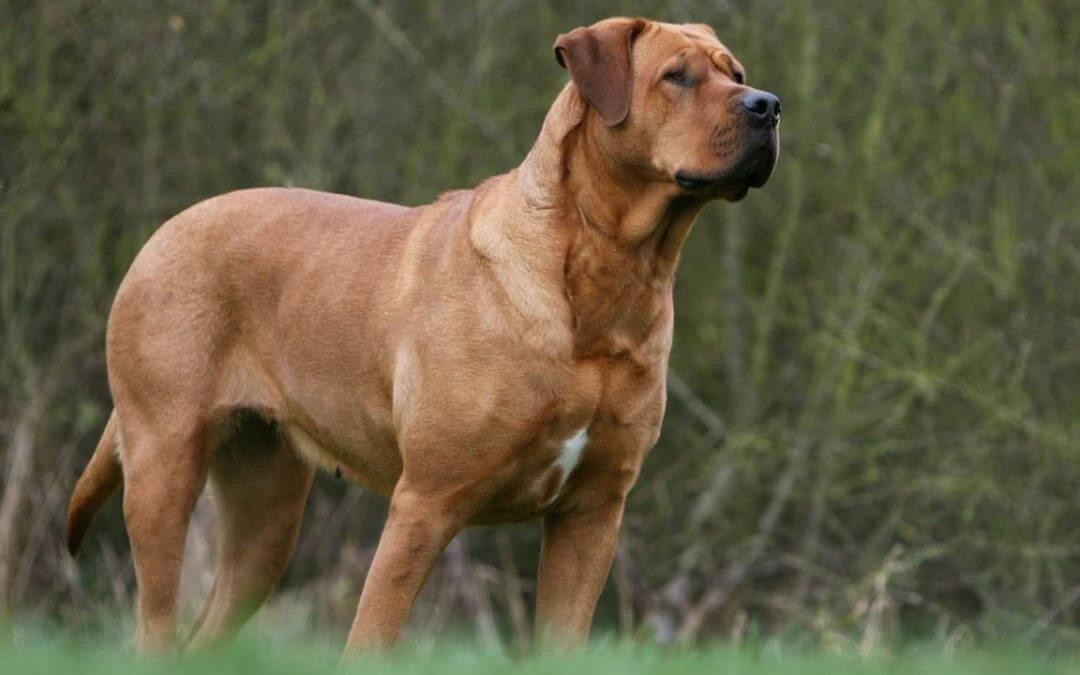 The Tosa, also called Tosa Inu, is a large and remarkably robust dog with well-developed musculature and strong jaws. Its tall body and harmonious lines give it an elegant appearance, but due to its strength and its morphological characteristics, the Tosa is considered one of the most dangerous dogs in the world.

Nevertheless, he has a balanced, bold, and affectionate character with his family, and generally relate very well to children, provided he has been socialized and educated properly. In front of strangers, the Tosa is suspicious, for this reason, good socialization is one of the most crucial factors when adopting an animal of this breed. 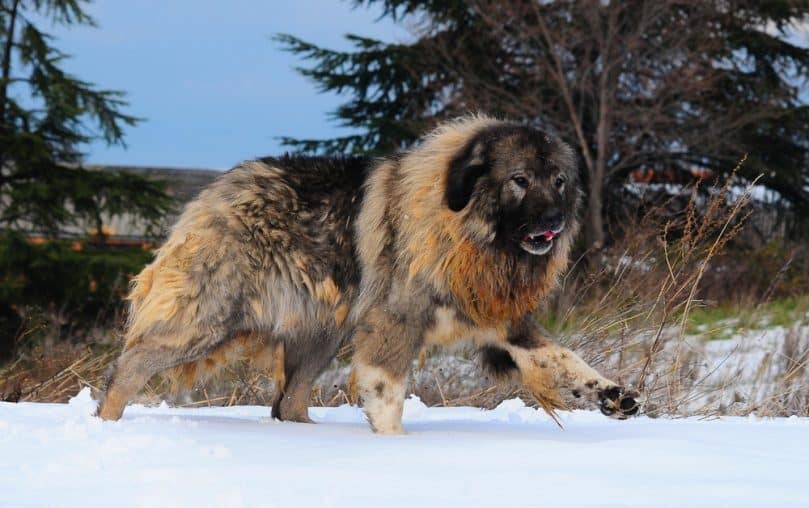 The Caucasian Shepherd Dog, also known as the Caucasian Shepherd, is a Russian dog breed, of the Molosser type, born in the regions crossed by Mount Caucasus. It is especially famous in Russia, Germany, Georgia, and Azerbaijan. Their original function was that of shepherd dogs, protectors of the flock, and to watch over and defend the possessions of its "owner".

We end our list of the most dangerous dogs in the world by highlighting that the Caucasian Shepherd Dog is not recommended for those inexperienced tutors, as its upbringing requires time, patience, and some knowledge about canine education and training.

Imran Khan committed to promoting science and technology in the country