The Newlywed Couple Arrives on Stage with Dangerous Weapons

Posted on Nov 12, 2019
There are different wedding rituals in Pakistan and South Asia where different wedding rituals are performed, everyone wants to make it memorable on the occasion of their wedding, they have to do whatever it takes but one news from the Indian state of Nagaland. Everyone has been surprised to read,
An exciting moment for a wedding on Saturday in the city of Dimapur, Nagaland, came when the newlywed couple arrived on the Stage with modern weapons.
The images that went viral on social media can be seen as the bride wore a white wedding dress while the bride wore a three-piece embroidery. 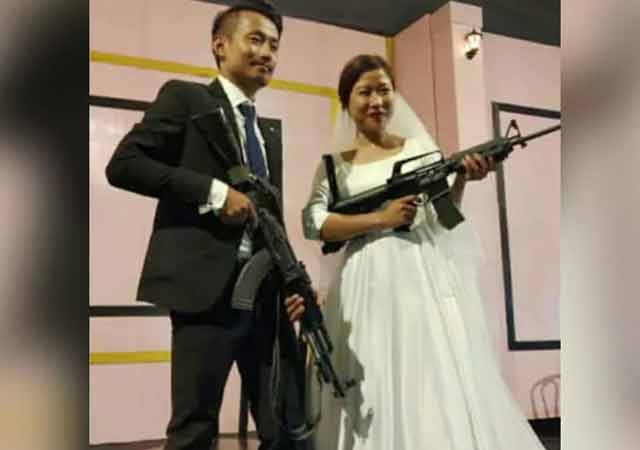 Guests were surprised to see the bride dressed on stage with modern weapons, however, when they were told the purpose of bringing Kalashnikov and M16, they could not stop laughing.
According to the media report, the bride wanted to do something unique at her wedding and to take pictures with the bride. The bride's AK-56 and the bride-to-be came on stage with the M16 guns and both made different pictures.
After the image went viral on social media, consumers demanded authorities to stop this behavior or else there could be any risk in the future.

Turkey will send his troops to Libya next month

Related Posts
Ultra-processed foods increase the risk of diabetes
Burn Belly Fat at Home ABS Workout 2020
A natural and easy cure for 100 diseases
Can Individuals with Diabetes and Heart problems Eats Eggs?
Cold weather and delicious soup in Karachi
which is Best carpet cleaning service, machine, chemical and method
Are you aware of the many benefits of the Orange
Make restaurant-style chicken Handi at home