Showbiz and political figures had also expressed anger over the running of the Turkish drama 'Ertugrul Ghazi' on Pakistan Television (PTV) in April this year. Actor Yasir Hussain was among the showbiz personalities who expressed anger over the Turkish drama being aired on state TV. Criticism of showbiz and political personalities for running the drama on state TV has its place, but despite this, Turkish drama set new records of popularity in Pakistan and the cast of the drama also became popular in the country.

After the cast of the play became popular, the most famous in Pakistan went to the lead actress of the play, Esra Bilgic, who played the role of 'Halima Sultan' in the drama. Given the fame of Esra Bilgic, some Pakistani brands had also expressed their desire to work with the actress, which was revealed by the actress herself in an interview with Dawn Icon earlier this month. The actress had said that she would soon be seen working with three Pakistani brands, after which more brands expressed their desire to work with the actress.

After Pakistani brands wanted to work with the actress, Esra Bilgic had said in her social media message in Urdu that she does not work with any management company in Pakistan, those who want to work with her in Turkey. Contact their partner company. After the popularity of Esra Bilgic, Javed Afridi, owner of Pakistan Super League (PSL) franchise Peshawar Zalmai, also took to Twitter to ask fans for their opinion on what would happen if Halima Sultan was appointed as the brand ambassador of the cricket team.

After Javed Afridi's tweet, Esra Bilgic also wrote in reply to his tweet that soon Pakistani fans will get to hear good news. It was thought that Esra Bulgich would soon be appointed as Peshawar Zalmai's brand ambassador, but even before the announcement of the cricket team, the well-known Chinese mobile company Q announced the appointment of the actress as ambassador to Pakistan. 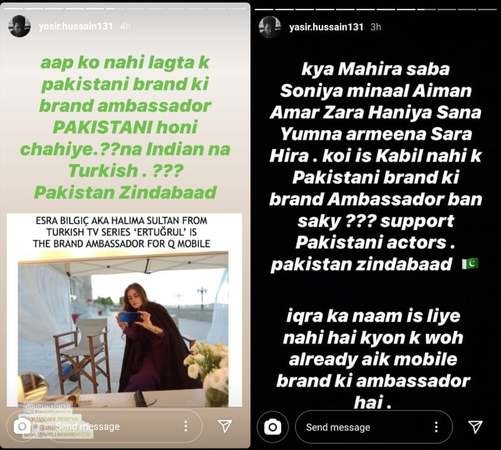 Q Mobile Pakistan confirmed in its social media post on July 12 that the company has appointed the Turkish actress as its brand ambassador. After the appointment of the actress as ambassador, while her fans were happy, some Pakistani showbiz stars also expressed displeasure over the decision and most of all, actor Yasir Hussain expressed his anger.

How Much Does Green Tea Benefit for Health?

Related Posts
American singer Cher: I am a fan of Imran Khan since he was playing cricket
Ayeza Khan actually signed legal papers!
Atif Aslam: Offering Azaan in Khana Kaba is the Life's Greatest Desire
How Did the Relationship Between Falak Shabbir and Sarah Khan Develop?
Javeria Saud for the first time in her life responded to hateful comments from people.
Supporting her sister's controversial tweet cost Kangana dearly
Nida yasir Rejected rumors of her health regarding Corona
Aijaz Aslam to Play A Negative Role in 7th Sky 's new serial 'Uraan'