By the way, there have been many plays in the history of the Pakistani television industry that has been able to win the hearts of the fans and in this case, 'Alif' is proving to be a drama which is loved by both the story and the actors.

In 'Alif', Hamza Ali Abbasi played the role of a proud and reckless filmmaker, 'Qalb e  Momin', while Sajjal Ali appeared as a girl named 'Momina Sultana' who wanted to become an actress.

In the 18th episode of the drama, which came out on Saturday, February 1, fans appreciated the acting of both Kubra Khan and Ahsan Khan, and now the lead actress Sajal Ali was also forced to praise Ahsan Khan.

Sajal Ali shared a screenshot of an episode of the 18th episode via Story on his Instagram account. 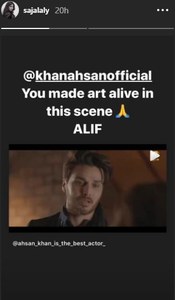 Photo: Screenshot
On this, he praised Ahsan Khan's work and wrote that 'Ahsan Khan revived the art in this scene'.

Later Ahsan Khan thanked Sajjal Ali and wrote that he was very kind. 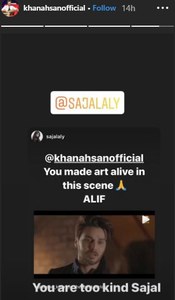 Photo: Screenshot
The story of 'Alif' was written by Umeera Ahmed while Haseeb Hasan is directing the play.

In an interview, Ahsan Khan said in reference to his role played in 'Alif' that my character was influenced by Rumi, he would not be a writer but he would be lost in his thoughts.

The actor also said that such a drama had not been aired in the Pakistani television industry till now and he had hoped that it would be liked by the fan.

China's neighbor where not a single patient has died from corona