Rob Delaney born January 19, 1977, is an American comedian, actor, and writer. He is widely known as a co-star and co-author of the television series Catastrophe (2015-2019), as well as a minor role in the blockbuster superhero film Deadpool 2 (2018).

Delaney grew up in Marblehead, Massachusetts. He attended the New York University of Tisch School of Arts and got a degree in musical theater in 1999.

Delaney first drew public attention via Twitter, which he started publishing in 2009. In 2016, Delaney had more than 1.2 million followers. While other comedians were reluctant to share their content on social media, Delaney is considered one of the first comedians to use social media to publish comedy. Delaney credits its author and director Graham Linehan for increasing popularity after Linehan began responding to Delaney's tweets.

In 2010, the magazine Paste ranked Delaney among the ten most amusing people from Twitter. In May 2012, he became the first comedian to win the “Funniest Person on Twitter” award at the Comedy Awards, organized by Comedy Central. 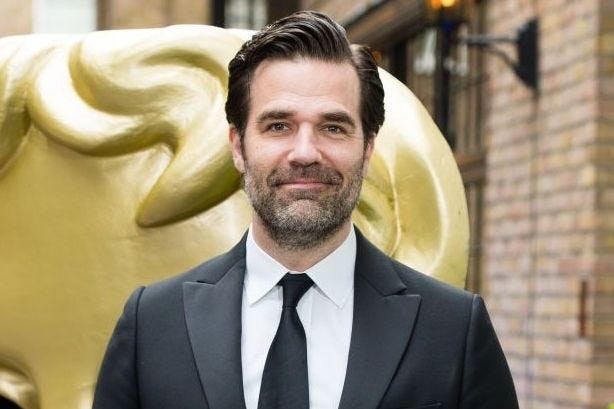 In December 2011, Comedy Central announced that Delaney would be filming a pilot for a variety show called “@RobDelaney”. However, the series was never taken up by them.

Instead, Delaney moved to co-write and co-star with Sharon Horgan in the Catastrophe series, which began airing in the UK on January 19, 2015, on Channel 4. It is confirmed that the fourth season is the final of the series. Channel 4 has aired the final episode on February 12, 2019, while Amazon announced that the release date in the United States would be March 15 of the same year. The series earned him only Emmy Award nomination for “Outstanding Writing”.

Since arriving in the UK in 2014, Delaney has participated in several British talk shows, including "Would I Lie to You?", "8 Out of 10 Cats Does Countdown", "Big Fat Quiz of Everything", and "Room 101". In the movie Deadpool 2, Delaney plays Peter, a middle-aged, powerless man who joins Deadpool's X-Force. As part of the promotion of the film, a Twitter account was created in the name of Peter.

Delaney is an Irish American. Delaney is married, he and his wife, Leah Delaney, have four sons, one of whom died in January 2018. In February 2018, Delaney announced publicly that their son Henry had died at the age of two and a half the previous month after being diagnosed with a brain tumor in 2016 and receiving intensive treatment. The couple's fourth son was born in August 2018. Delaney and his family live in London.

Delaney has publicly shared his experience of depression and alcoholism. In 2002, Delaney lost consciousness while driving and drove his car into a building belonging to the Los Angeles Department of Water and Energy. In the wreckage, he fractured his left wrist and right arm and scratched his knees. This prompted Delaney to stop drinking.

Delaney is a leftist progressive and often writes on political issues. He said he chooses presidential candidates based primarily on their education and health care policies: “Help your citizens are healthier and smarter and they will save you in a way that you haven't imagined yet.” After Donald Trump's election as president, Delaney joined the Democratic Socialists of America, the National Association for the Promotion of People of Color and the American Union of Civil Liberties.

In June 2017, Delaney approved the Labor party in the 2017 UK general election. In November 2018, he supported a petition organized by the Momentum campaign working group calling on Labor MPs to vote against the EU withdrawal agreement which had been negotiated by Theresa May from the government.