The UN Secretary-General has arrived in Pakistan on a four-day visit to attend a global conference on Afghan refugees.

He met with a delegation of Afghan refugees in Islamabad.

On this occasion, he also met Mahira Khan, who is a well-respected refugee ambassador.

As we mark 40 years of Pakistan’s solidarity with Afghan refugees, it was a pleasure to meet @Refugees Goodwill Ambassador @TheMahiraKhan

I thank her and all Pakistanis for their extraordinary support. pic.twitter.com/wsdsSestCk

In his tweet, Antonio Guterres wrote that "40 years of Pakistan's solidarity with Afghan refugees have been completed, in the meanwhile, it was also a pleasure to meet Ambassador Mahira Khan, the Ambassador of Refugees."

He thanked Mahira Khan for his extraordinary support to the whole of Pakistan.

On the other hand, Mahira Khan also wrote in a tweet in reply to his reply that he too was pleased to meet the UN Secretary-General.

It was a pleasure meeting you as well. Looking forward to a lot more work alongside my fellow Pakistanis and @Refugees ♥️🇵🇰 @antonioguterres https://t.co/gG1inSSPS9

It is to be noted that during the meeting with the delegation of Afghan refugees, the UN Secretary-General had said that Pakistan is one of the countries with the highest number of refugees.

He had said that there are 27 million refugees in Pakistan as a whole, while 24 million registered refugees were affected by the Afghan war.

Antonio Guterres also thanked the Government of Pakistan for hosting the refugees.

At that time, Khan said she was proud to be born in a country that has been welcoming migrants from around the world for the past 40 years.

The ceremony to appoint Mahira Khan as a goodwill ambassador was held in Islamabad, in which the Assistant Commissioner of Operations of the United Nations was given the degree. 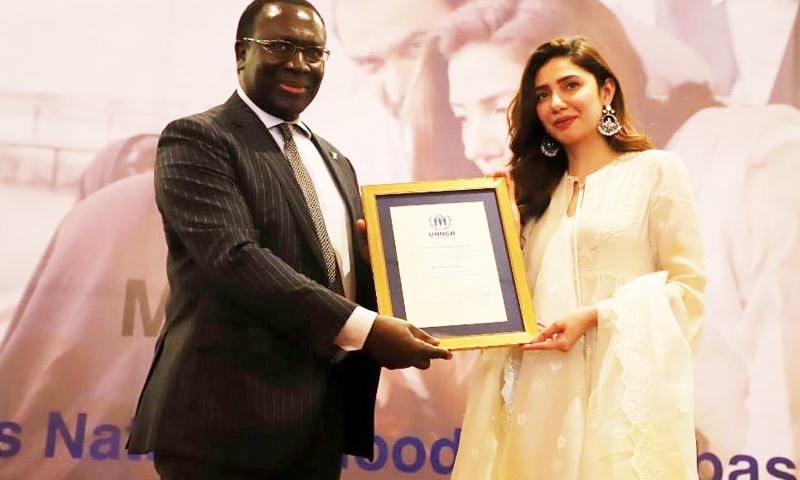 The actress was also given a certificate of goodwill ambassador - Photo: UNHCR Instagram

Related Posts
Abuse of children, Bushra Ansari demands the camera in madrassas
Ayyan Ali, the Main Character in the Dollar Smuggling Case, Returns to Showbiz
PIA mismanagement is unforgivable: Actress Mahira Khan
Did Prince Charles suffer from Corona Due to an Indian singer?
Ayesha Omar Is Not Encouraging Women to Wear Shorts
Is it really necessary to go to the bazaar and shop for Eid at such a time? Sanam Saeed
Shahroz Sabzwari confirmed separation from his wife, Syra Shahroz
Arshad Warsi Willing to Sell Kidneys to Pay Electricity Bill