Pakistani actress Sarah Khan has managed to grab the attention of fans in recent years and her plays have also become very popular. Recently, there was talk of her marriage to singer Falak Shabbir on social media. Sarah Khan and Falak Shabbir had announced their engagement on July 14 and their wedding celebrations started the next day and they tied the knot on July 17.

And his performance as a negative character in the drama 'Sabbat' aired on a private TV channel is also being appreciated. Sarah Khan has so far acted in various Pakistani dramas which became popular and now pictures of her first debut have gone viral on social media in which she appeared on screen for the first time. These pictures of the actress are actually from the video of the song 'Ankhon Mein' released in 2012, from which she entered the showbiz industry. 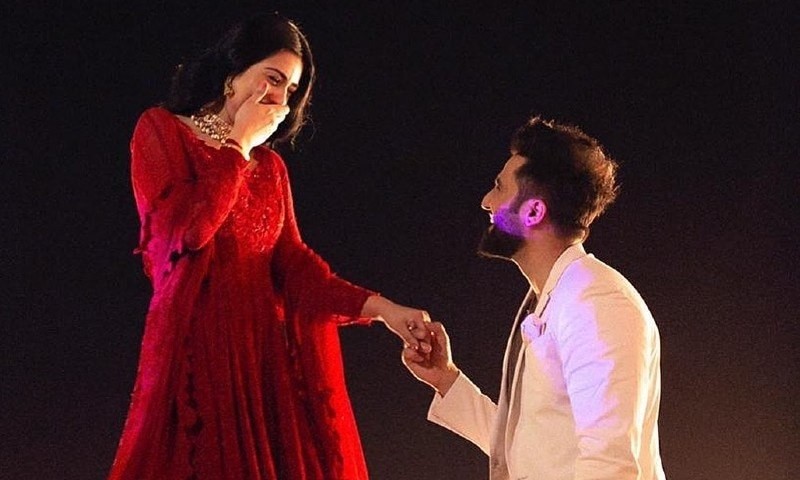 The song was sung by singer Sohail Haider and is now being watched again after Sarah Khan's pictures went viral. In her first video, Sarah Khan is seen in a completely different style than the current style of dress, which has surprised fans and even criticized some. Some consumers criticized her dress while others said that Sarah Khan has groomed herself in 8 years. It is believed that his clothes are being criticized in the video because he himself had made a statement in this regard.

Not long ago, Sarah Khan had said in a program about not turning to the film world that she had some offers but she did not want to wear short dresses and film intimate scenes, which are the first demand for films. After this music video in 2012, she appeared in a supporting role in the TV drama Badi Apa in the same year. She also starred in Mohabbat Aag Si, Nazar Bad, Belapur's Witch, and Closed Windows and won Best Actress for Belapur's Witch.

Sarah Khan is playing a negative role in the drama of stability these days which is being appreciated by the fans.

Related Posts
Kim Jong Un's silence may be an attempt to escape Corona, South Korea
The court restrained the NAB from arresting Shahbaz Sharif
I Have No Intention of Getting Married, Charlize Theron
Aysha Omar Surprised the Audience with Song
Hadiqa Kiani Pays Homage to Kashmiri Martyrs With Turkish Singers
Turkey's mosque turned into a 'supermarket' for the needy
A female patient plays the violin in an operation theatre at a hospital in London
Kanye West Has Submitted His Nomination Form for the Us Presidential Election