A few days ago, on July 24, a video of senior actress Salma Zafar surfaced on social media in which she made serious allegations against actress Javeria and her husband Saud. In a 35-minute video, Salma Zafar had claimed that Saud and Javeria had spent Rs 10 million on them while thousands of rupees had been spent on ordinary employees. 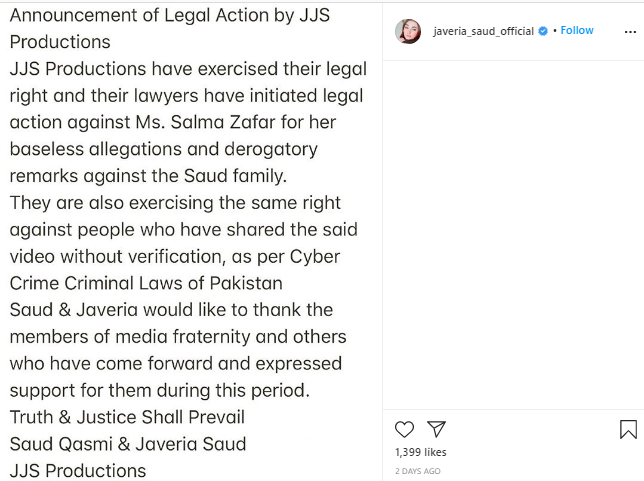 In the video, she admitted that she did not have any evidence of corruption in the jury and Saud and that they were embezzling money from employees, but she was telling the truth. Salma Zafar had also accused Saud of ridiculing women and eating their earnings. After the video of Salma Zafar went viral, although the actress Javeria had denied all the allegations, now she has also announced legal action against the actress.

After Salma Zafar's video went viral, Javeria had claimed in an interview given to Urdu News that he had cleared the senior actress' money many years ago and if they did not pay, Salma Zafar would have paid for 7 years then why she works with them? According to Javeria, a few months ago, Salma Zafar had told him that she was starting a business with a very good party and he asked her to join it but Javeria forbade her.

The jury claimed that when they refused to do business with Salma Zafar even after her insistence, they felt very bad, and then this video of her came out in which they are making allegations against her. After rejecting Salma Zafar's allegations, Javeria said in her Instagram post that she and her husband actor Saud are going to take legal action against actress Salma Zafar.

The actress also thanked the media industry for their support.

Related Posts
Arnold Schwarzenegger invited PM Imran Khan to attend Austria World Summit
Following Court Orders, the Cbi Has Intensified Its Probe Into the Sushant Singh Case
Imagine if a pigeon suddenly started flying in front of you while traveling on a plane?
Sharing a photo with Adnan Siddiqui, Zainab Abbas got in trouble
Reham Khan: The only Prime Minister who was disgraced for prices of petroleum products
Mehwish Hayat will not perform at the opening of the PSL5
Saba Qamar signed another film just before the release of 'Kamli'
Sania Mirza lost 26kg in 4 months after childbirth