Geoffrey Rush was born on July 6, 1951, in Queensland, Australia. He spent his childhood in Brisbane, and as a teenager, he discovered theatre. He chose an artistic training and studied art at the University of Queensland. In 1974, he continued his training in Paris at the Jacques Lecoq school where he learned mime, improvisation, and commedia dell'arte. He also spent two years in London at the British Theater Association. 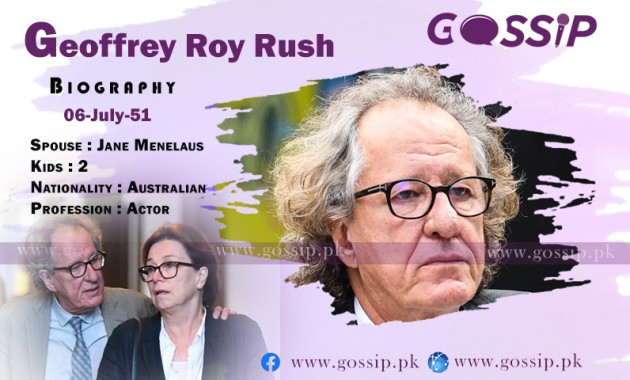 The aspiring actor Geoffrey Rush joined the Queensland Theater Company. He plays the buffoon in William Shakespeare's King Lear which allows him to stand out. For two decades he collaborated with various theatre companies and performed many roles. In 1979, he played alongside Mel Gibson notably in Waiting for Godot by Samuel Beckett. He also plays in pieces by contemporary Australian authors like Patrick White or Stephen Sewell. During the 1980s, he joined the State Theater Company of South Australia, which offered him many roles; The dream of a summer night, Twelfth Night, The Blind Giant is Dancing or The Marriage of Figaro. In 1989, he won the Variety Club Award for best theatre actor and the Critics Circle Award for best interpretation for his role in the play The Diary of a Madman.

At the same time, Geoffrey Rush landed a few cinema appearances; Hoodwink in 1981, Starstruck in 1982, or Twelfth Night in 1987. In the mid-90s, his career took off again when he won the main role in the film Shine by Scott Hicks. This role earned him the Oscar for best actor in 1997 and revealed it to the general public. He then leaves the boards a little to devote himself to the seventh art.

From then on, he embodied many outstanding characters; Inspector Javert in Les Misérables, Casanova Frankenstein in Mystery Men, the Marquis de Sade in Quills, pen, and blood, or Leon Trotsky in Frida. He plays the role of Hector Barbossa in the Pirates of the Caribbean saga in which he appeared several times (2003, 2006, 2007, 2011 and 2017). He alters the registers and also lends his voice to Nigel in Finding Nemo and to the narrator in Minions. In 2010, he interpreted the speech therapist of the Future King of England in The Speech of a King which allowed him to win the British Academy Film Awards in the category of best actor in a supporting role.

has been married to Jane Menelaus since 1988. The couple has two children; Angelica born in 1992 and James born in 1995.

In December 2018, Australian actress Yael Stone accuses Geoffrey Rush of inappropriate behaviour while they were working together on The Diary of a Madman in 2011.