In August 2019, 116 national and foreign dignitaries nominated by the President of Pakistan Arif Alvi for various civil awards were presented with awards on the occasion of Defense Day. Arif Alvi had announced on August 14, 2019, to give awards to the said personalities, who were to be given awards on March 23 this year, but due to the epidemic of Corona, they were not given awards in March.

However, now on the occasion of Defense Day, awards ceremonies were held on September 7 in the Governor's Houses of the four provinces, including the Presidency of Islamabad. The awards were given to 44 personalities in the Presidency of Islamabad while the remaining 76 personalities were awarded in the Governor's Houses of the remaining four provinces. 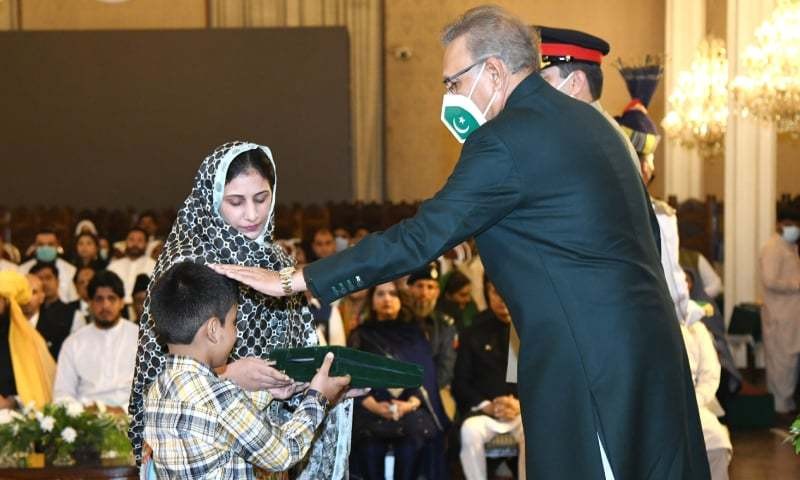 A total of 22 fine arts personalities were awarded at the awards ceremonies held at the Presidency and the Governor's House of the four provinces.

Like Sindh and Punjab, awards ceremonies were held at the Governor's House in Khyber Pakhtunkhwa (KP) and Balochistan. It may be recalled that the well-known poet, translator, and writer Fehmida Riaz was also announced to be given the Presidential Award for Excellence by the President of Pakistan, however, her daughter refused to accept the award.

Fehmida Riaz's daughter Virta Ali Ajan had announced in a Facebook post a few days ago that she would not accept the award given to her mother in protest. Her daughter wrote in her post that writers and journalists are abducted, tortured, and even killed, harassers are given awards and Karachi is left to rot in the sewers. Has given

"I refuse to accept the presidential award for my mother's work, I'm sure she would have refused if she were alive today," he said.