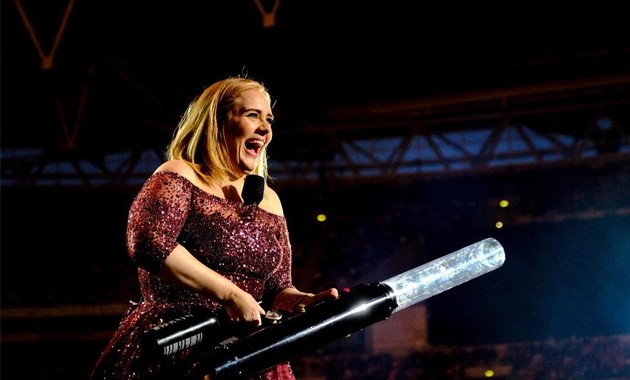 Adele was born (May 5, 1988) in the borough of Tottenham, located in the North London area, to Penny Adkins and Mark Evans.

To an English mother, Penny Adkins, both a masseuse and furniture maker, and a Welsh father, Marc Evans, a plumber. Marc Evans, a big fan of blues, wants to give him as first name Blue in reference to this music, but the couple finally agrees on Adele Laurie Blue Adkins. She was three years old when her father left the family home to return to Cardiff. His mother, who raised him alone, then moved several times.

She left Tottenham in 1997, left for Brighton, then returned to the suburbs of London in 1999 (Brixton, then West Norwood, parts of the Lambeth District). She sings from the age of four and claims she was obsessed with vocals. She cited the Spice Girls as a major influence in relation to his love and passion for music and mentions that they have made it what it is today. She imitates them at parties. She is also very fond of British singer Gabrielle, whose songs she covers in her debut.

She made her debut in 2008 with the album 19, which received a good reception from music critics and reached the top of the British and Dutch charts. Her second album 21, was released on January 21, 2011, also being well received by critics and reaching # 1 in 25 countries. On November 25, 2015, thanks to her third album 25, Adele became the first artist to sell over three million copies in one week in the United States of America alone.

Together with Duffy and the late Amy Winehouse, she is considered one of the new generations of white souls' exponents. In 2011, the US magazine Billboard awarded Adele the title of "Best Artist of the Year", while the US magazine Time praised Adele as one of the world's most influential women.

As of 2015, the singer has sold around 40 million albums and over 50 million singles worldwide. At the 2013 Academy Awards ceremony, she was awarded the statuette for the best song with Skyfall, taken from the film of the same name. For her career successes, in the same year, she was awarded the honor of Member of the British Empire's Order.

Her interest in music began to develop in childhood, thanks to listening to bands like the Spice Girls and Destiny's Child. At the age of thirteen, she became passionate about soul music and artists such as Ella Fitzgerald and Etta James. A year later, she enrolled at the BRIT School in Croydon, a well-known music school, attended in the same years by Jessie J, another future English singer.

In 2006 Adele graduated and began to pursue her dream of becoming a singer by recording and uploading some songs to her Myspace. In this way, she attracted the attention of the public and was invited to several British TV shows, quickly gaining great notoriety. He thus signed a contract with the record label XL Recordings.

In 2007 her first single, Hometown Glory, was released, while in January 2008 his second, Chasing Pavements, was released, which has been very successful throughout Europe and the United States of America—reaching the first position in the charts in Norway and the second largest in the United Kingdom. The single was followed the following month by her debut album 19, a title that shows her age at the time of the release.

The album, recorded with the collaboration of producer Mark Ronson (the same as Back to Black by Amy Winehouse), is a concentration of romantic pop-soul songs that talk about love, disappointments, friendship, and all the other emotions that stir the soul of a girl between 18 and 19 years old.

It has enjoyed excellent commercial success, with over 6,500,000 copies sold, reaching good rankings in several states and first place in the UK and the Netherlands. This allowed the singer to win the Critics' Award at the 2008 BRIT Awards, and in 2009 the Grammy Award for Best New Artist. The songs Cold Shoulder and Make You Feel My Love was also extracted from the disc as singles, while the song Hometown Glory had only been released in a few copies in vinyl format in 2007.

However, these three singles had a smaller following than Chasing Pavements, reaching lower positions on the charts. On May 10, 2011, news broke that Adele's ex-boyfriend was willing to sue the singer to get a portion of the proceeds relating to the rights of 19 songs inspired by their story of love, arguing that the suffering he caused to Adele was the basis of the writing of the songs.

The singer returned to the recording studio during 2010 to work on her second album. In November of the same year, the single Rolling in the Deep was presented, the first song transcribed from the singer's second work, whose publication took place in January 2011 with the title 21. That takes up the idea exploited with the first work to use the singer's age as the title at the release time.

The single achieved great success at the European level, reaching the top of several charts, including the Italian one, with excellent results everywhere; for the first time, Adele is imposed on the American Billboard Hot 100, also reaching the first position there seven weeks. Even 21 proved to be a critical and commercial success, selling over four million copies in the UK and bringing the top of the album chart also his previous album, 19. This appreciation is also due to the second single Someone like You at home, which topped the singles chart, achieving double platinum certification (1,200,000 copies) and becoming the first single of the decade to exceed the 1 million copies sold here alone.

After a four-year hiatus, on October 23, 2015, Adele released the single Hello, aimed at anticipating her third unreleased album, entitled 25 and released on November 20. The single, accompanied by its video clip shot in Montreal, finished first in the music charts of 35 countries around the world, including the Billboard Hot 100, in which it remained in the first position for ten consecutive weeks—becoming the first song to cross the million-download mark in a single week in the United States of America.

In December 2015, Hello was one of the best-selling singles of the year, with over 10.5 million copies, of which six in the United States alone, a country where it was certified six times platinum by the RIAA. On January 19, 2016, after 88 days, the video had reached a billion views, becoming the fastest video to achieve this goal, beating the previous record held by Gangnam Style by PSY.

Request for action against programmers on the Prime Minister