Hello everybody, it's that time again for us to go through and choose our Top 10 Cricket Bats for this season We've got a fantastic range in this summer. They're all in, they've been selling well, and we've gone through and selected what we think is the best bats for the summer. So, let's get straight into it and pick the Top 10 Bats for Cricket 2019-20. 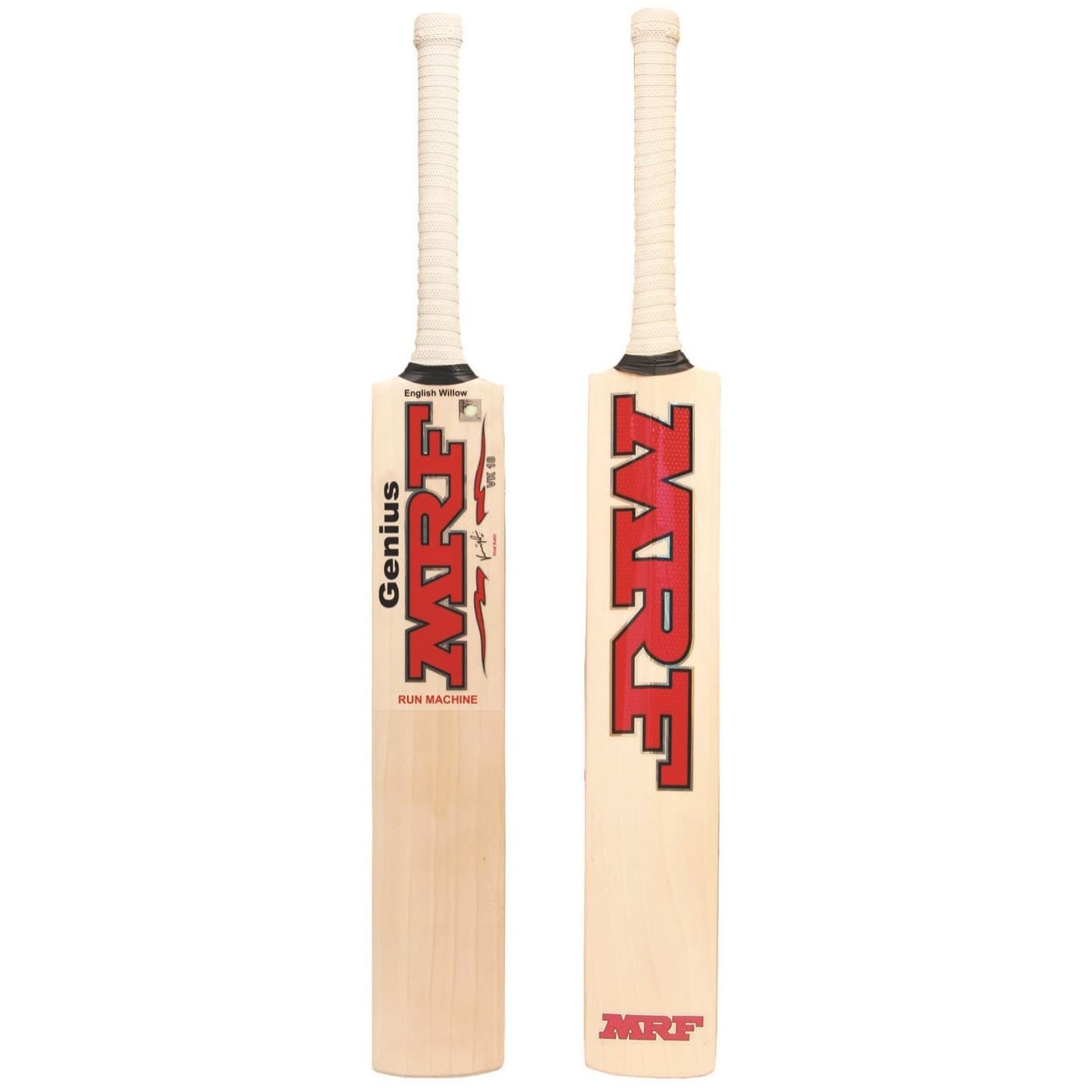 So, in at #10 in the Top 10 Bats for the season is the MRF Run Machine. We've been happy with how these have come through. Obviously, great quality from MRF. The famous, iconic labels. But these bats have been good, you get that great shape. This is a Virat Kohli model. The punch on these has been fantastic.

The weights are great, pick-ups are good. Value in these as well, you're looking at $500, so you get a super, super value bat in that if you're looking for something at sort of that higher end. If you're a fan of MRF, come in and check this out. #10 in the Top 10 Bats. 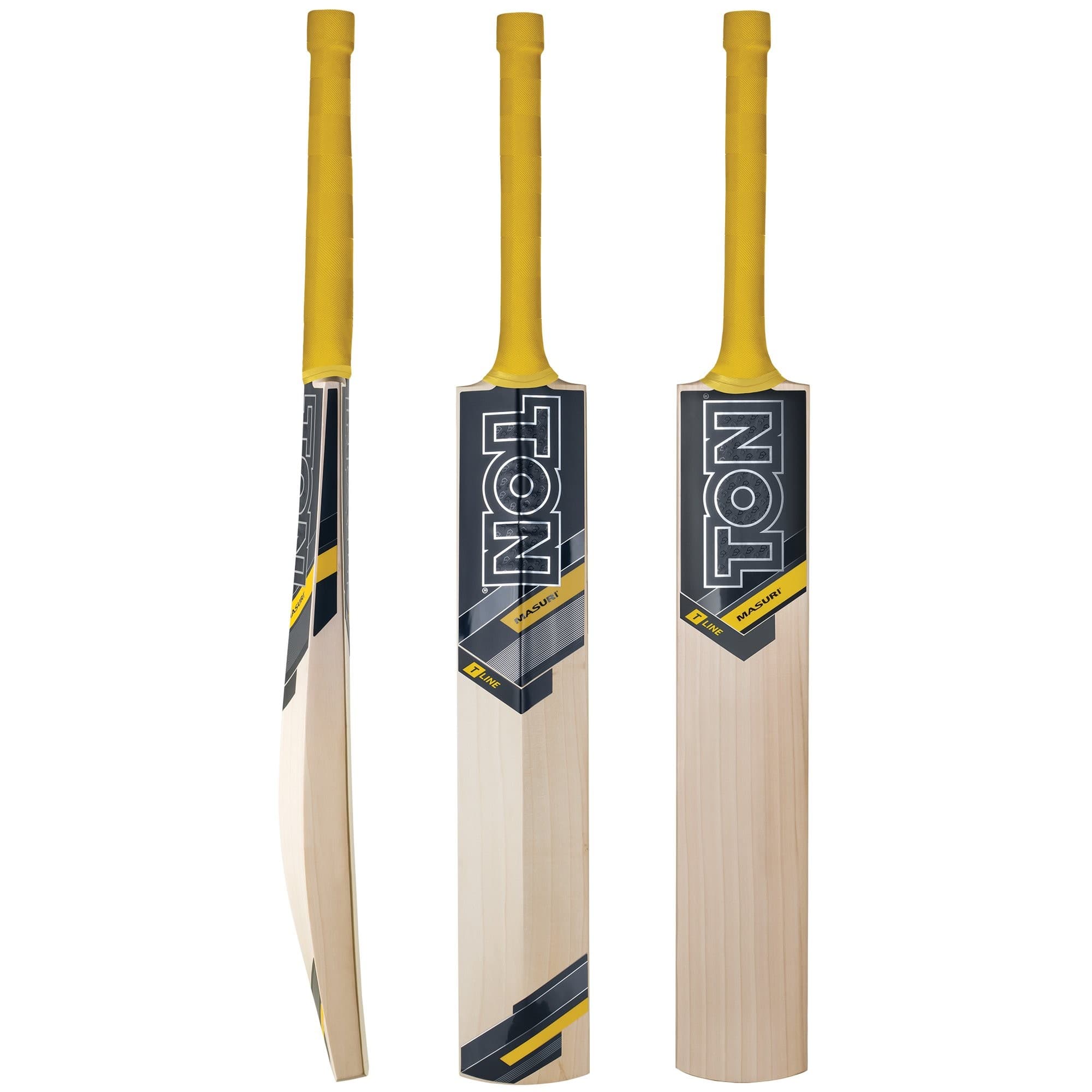 Alright, in at #9 — very exciting, brand new to the market, they've only just come out, they've only just reached our stores — is the Masuri — by TON — T-Line cricket bats. So, Masuri, obviously the famous helmet maker, has teamed up with one of the best bat makers in the world in Sareen Sports in India, to produce these bats, and they've done a fantastic job.

So, a great bat, obviously a nice classical shape, the wood where you need it, so these have been superb. Really excited to have them in, they look great. They're great on the shelves. Good value as well, they're $600. You get a top-line bat for that. If you want something a bit different, something a bit unique, come in and check out the TON T-Line Masuri bat. So that's in at #9 in the Top 10 Cricket Bats of the season. 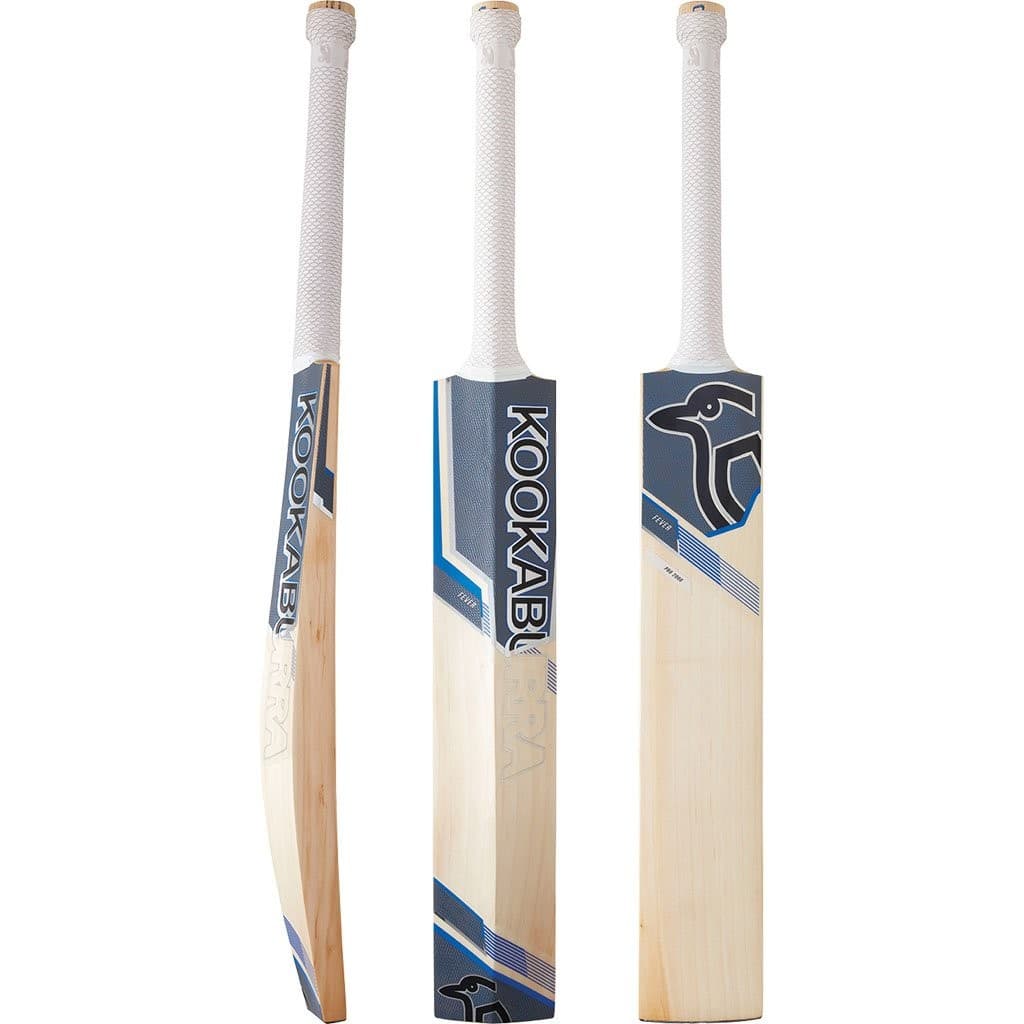 Coming in at #8 is the Kookaburra Fever Pro 2000. So, we've been really, happy with these ones. We're maybe a little bit surprised — so, this bat's obviously a little bit different because it's got that shorter blade with that slightly longer handle, but these have been superb. The punch on these has been fantastic. Obviously, with the way these bats are made up, the pick-ups on these are super light, so that's awesome. And plus, the value on this is phenomenal — you're looking at like $375, so — awesome, the awesome value on this. Great punch on these. That's why this one is #8 in the Top 10 Cricket Bats. 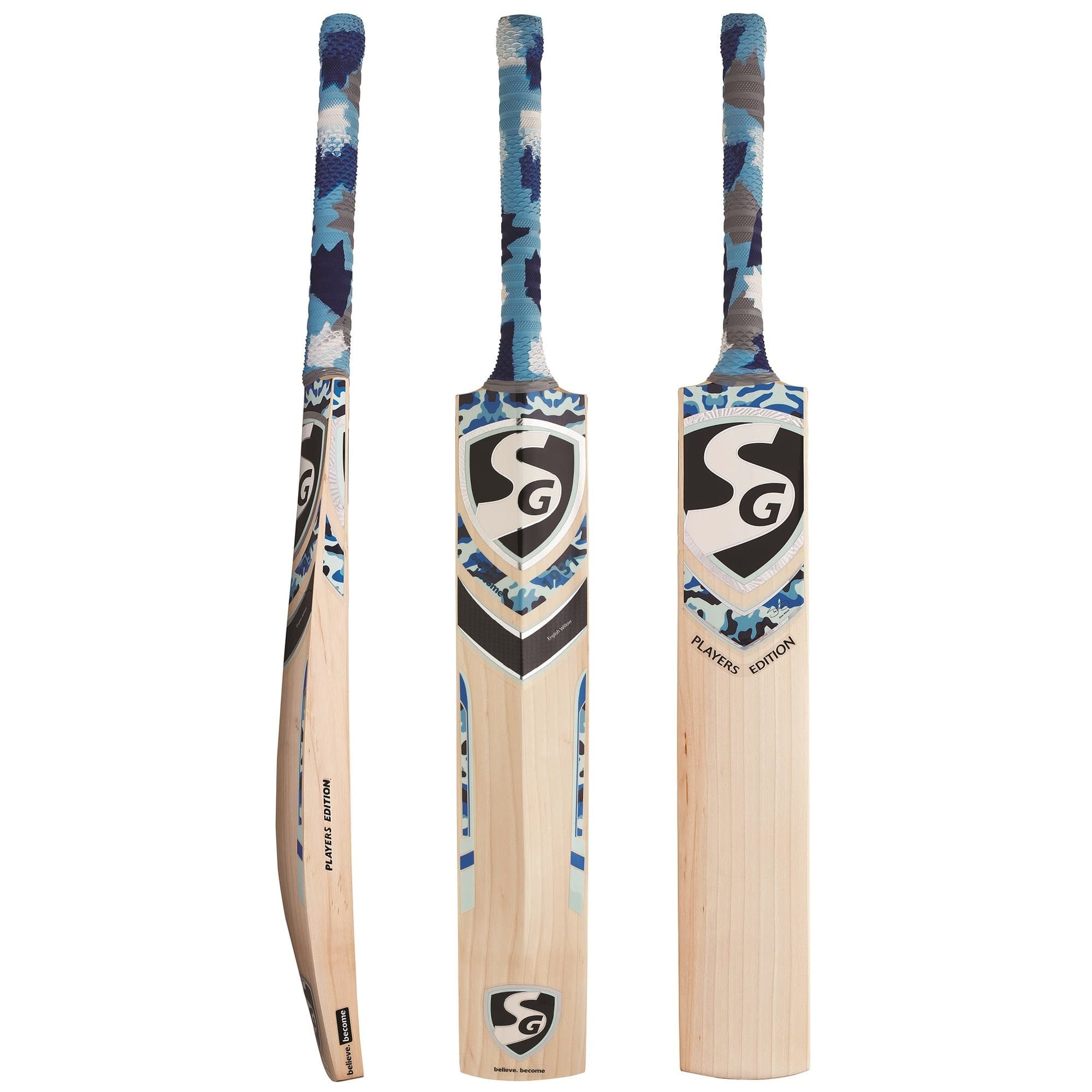 In at #7 — we've waited a long time to get these in, we've wanted to have this brand of a bat in for a long time. We finally got it in, and they haven't failed to deliver. So, the SG Players Edition. We're super excited, obviously, to get these in this season and they certainly haven't let us down. Fantastic bats, super middles in these, great punch out of them. Fantastic shape, obviously.

So, we're really, really pleased with how these have come through — so good, we've had to order them in again. And, the best thing about this is the value of this. So, obviously you're getting a top-grade bat, and it's under $600. So, these are fantastic. So, come in and check out the SG Player Edition. 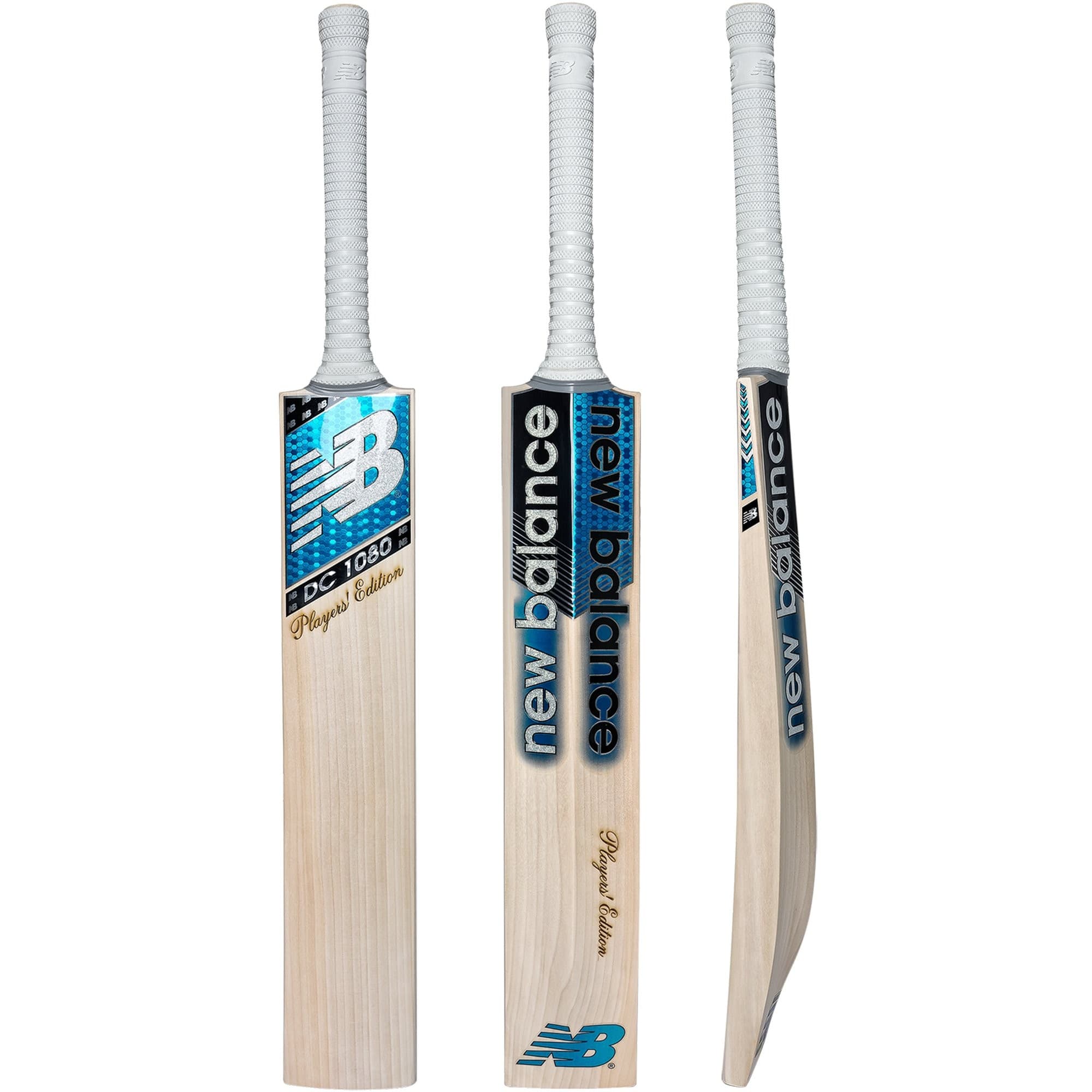 In at #6 is the New Balance DC 1080 Player Edition. Now, I can't promise if you buy one of these you'll bat-like Steve Smith, but, if you want to use something like what Steven does use, then this is the bat for you. Obviously, being it's a very top-end bat, so, it is pricey — it's over $1,000, but — if you're looking for something at that high top-end, then this could be the bat for you.

So, a nice player's shape, so obviously the swell where you need it, down into that duckbill toe. Weights on these have been really good. Obviously, the middle has been superb in these, so you get plenty of power and punch in them. It comes with the oval handle, feeling superb in the hand. You go with more of that player's toe, that square toe, which a lot of the players tend to like, especially Steven — he's a little bit funny with how he looks at his bat behind his toe — that makes him feel comfortable.

We're happy with these, they've been selling really well. So, if you're looking at that bat at the top-end, come in and check out the New Balance DC 1080 Player Edition. 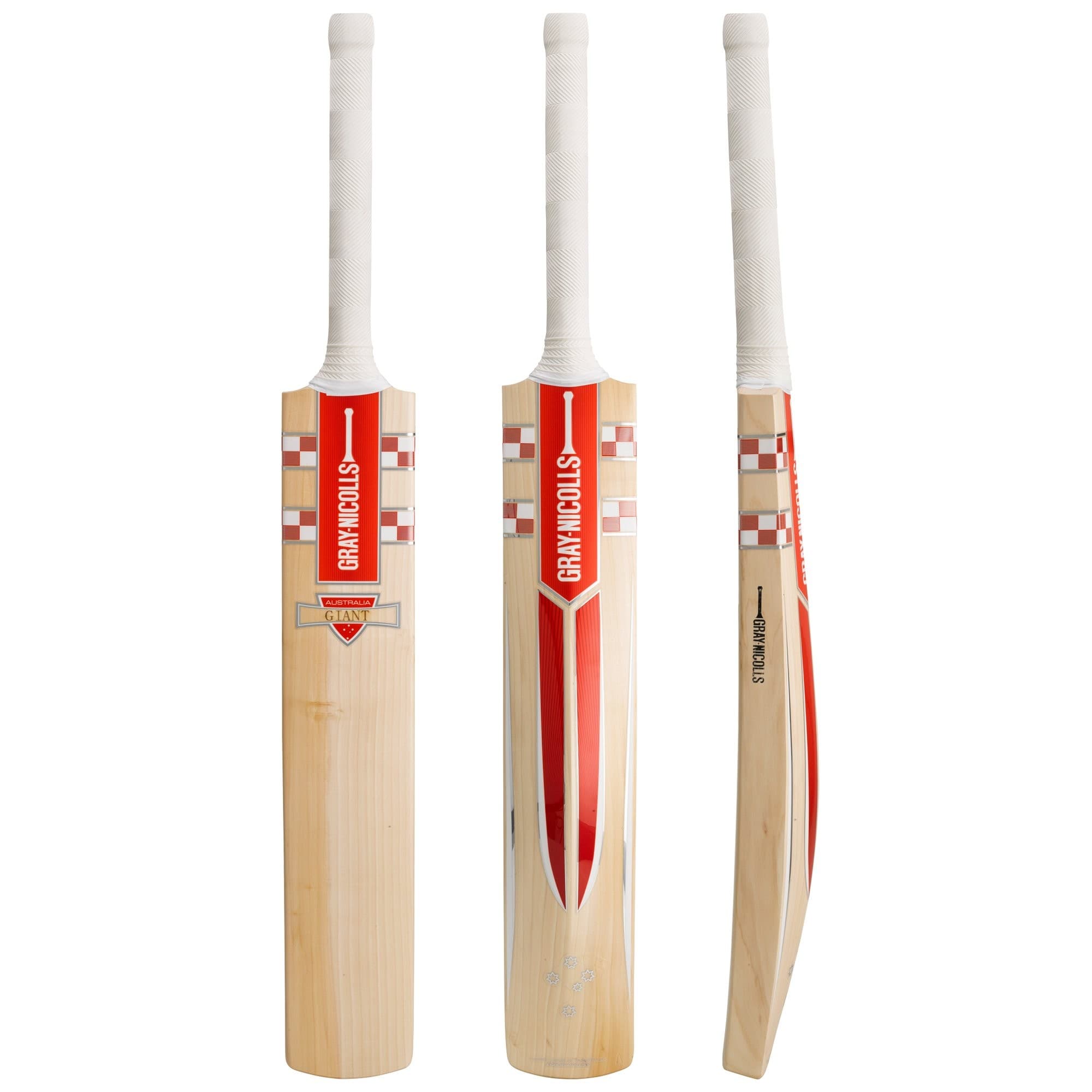 Okay, now into the Top 5. And coming in at #5 is a bit of a surprising bat, probably a bat we didn't think would be in the Top 5, but, look — I did choose it last year. It is the Gray-Nicolls Giant. So, as the name suggests, they are a big bat. They're a big, heavy bat. But they have been superb. So, the punch out of these, the power out of the middle, has been phenomenal. So, as you can see, it's obviously just a nice, big, solid bat.

Big middle, big shoulders, big toe, big everywhere. You're looking — these things are over 3 lbs., so if you do want to use one, you want to have been going to the gym and be nice and solid. And obviously be a fan of hitting fours and sixes and not doing a lot of running. But these have been phenomenal. Great value in these too, these things are under $300, so — if you're looking for that really big bat with a lot of power, at a wonderfully affordable price — made in Australia, as well, which is fantastic, made down in Melbourne by the great Stuart Kranzbuhler, the Gray-Nicolls Giant is definitely one to come in and check out. 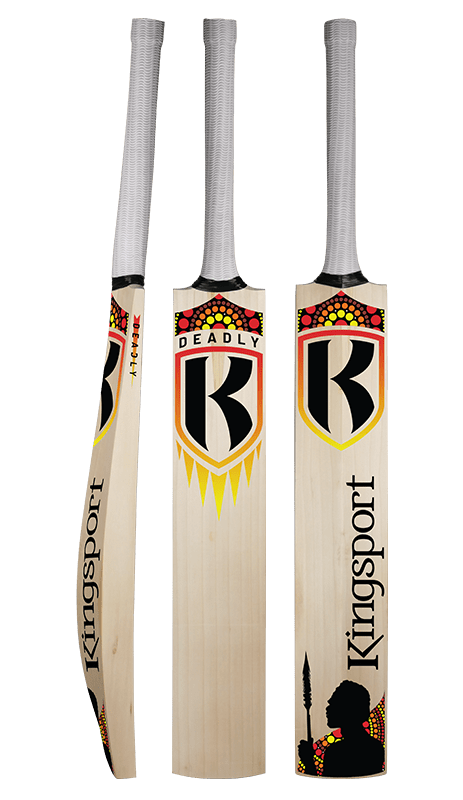 In at #4 — we're very proud of this because it's one of our own — it is the Kingsport Deadly. So we did a little bit of work on this, so we've actually done something a little bit different — we actually downgraded the grade of willow in this so we could bring the price down. Because we obviously wanted to make it a little bit more affordable for everybody. We've been super happy with the results. They've come through fantastic. So, we've kept the same shape from last year — so, nice and big in the middle.

That slightly higher sweet spot in that. But the performance and the punch out of these have been superb. They're probably better than they were last year, so we're really pleased with that. We've updated the graphics, which is cool. Obviously, those indigenous graphics, which is good. Currently being used by Australian player Ash Gardner. So, super happy with these. Weights are good, good balance and pick-up. We're super happy with it, we know that you will be as well. So, come in and check out the #4 bat in the Top 10 Cricket Bats of 2019-20. 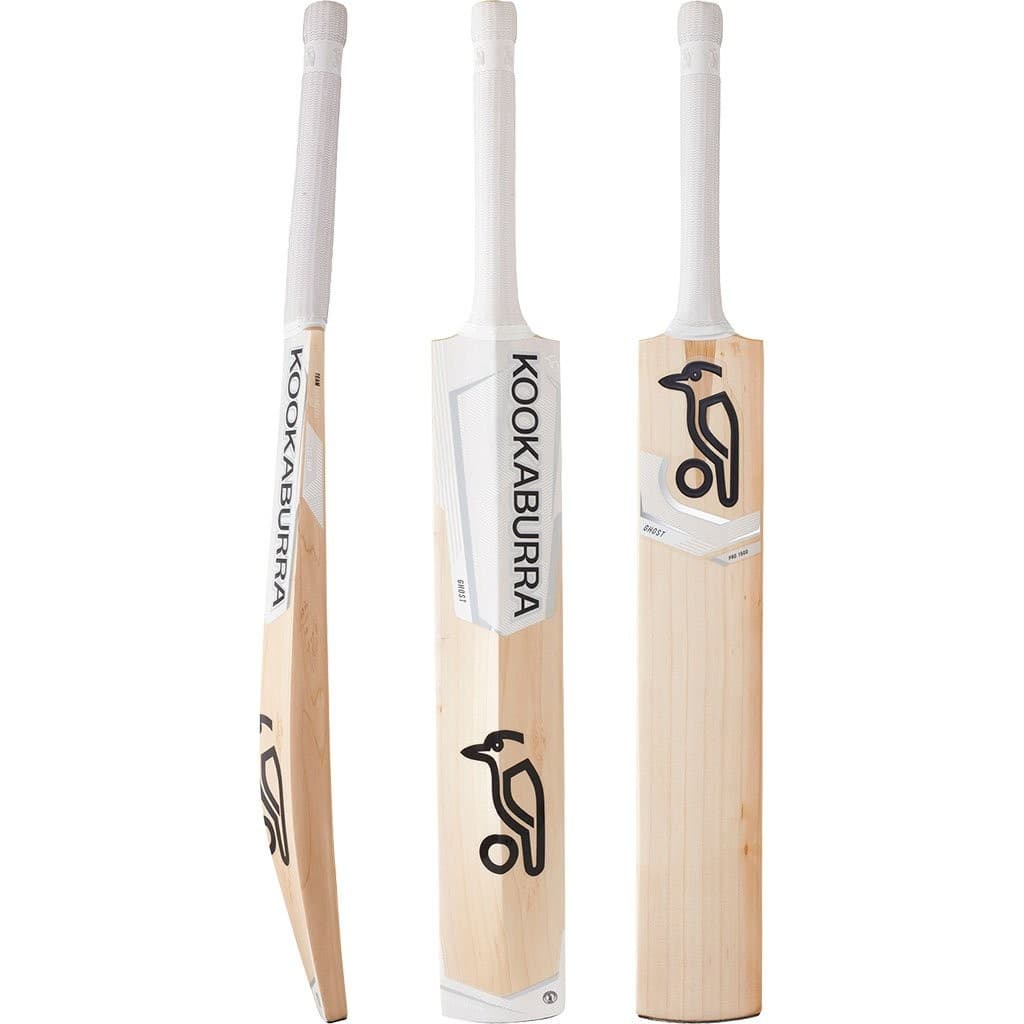 Right, so we've now hit the Top 3. And coming in at #3 is the Kookaburra Ghost Pro 1500. These bats have been fantastic. For starters, under $300, which is phenomenal. They've been brilliant bats, so even though it's under $300, a slightly lower grade of willow, you still get the great punch and great performance out of this, which has been fantastic. So, beautiful shape in these, you get that nice sort of sweeping size. Again, nice long middle in the sweet spot.

Weights of these have been great. Obviously, we were lucky enough — we went down and picked all these bats out, which was good for us, so we got the best of the best. They've been selling unbelievably well. The Ghost is obviously one of Kookaburra's most popular models. The all-white, it looks good with the blackbird, and the black Kookaburra writing. So, if you're looking for a bat that's got great performance, but you're on a budget and you want great value, you really should come in and check out the Ghost Pro 1500. 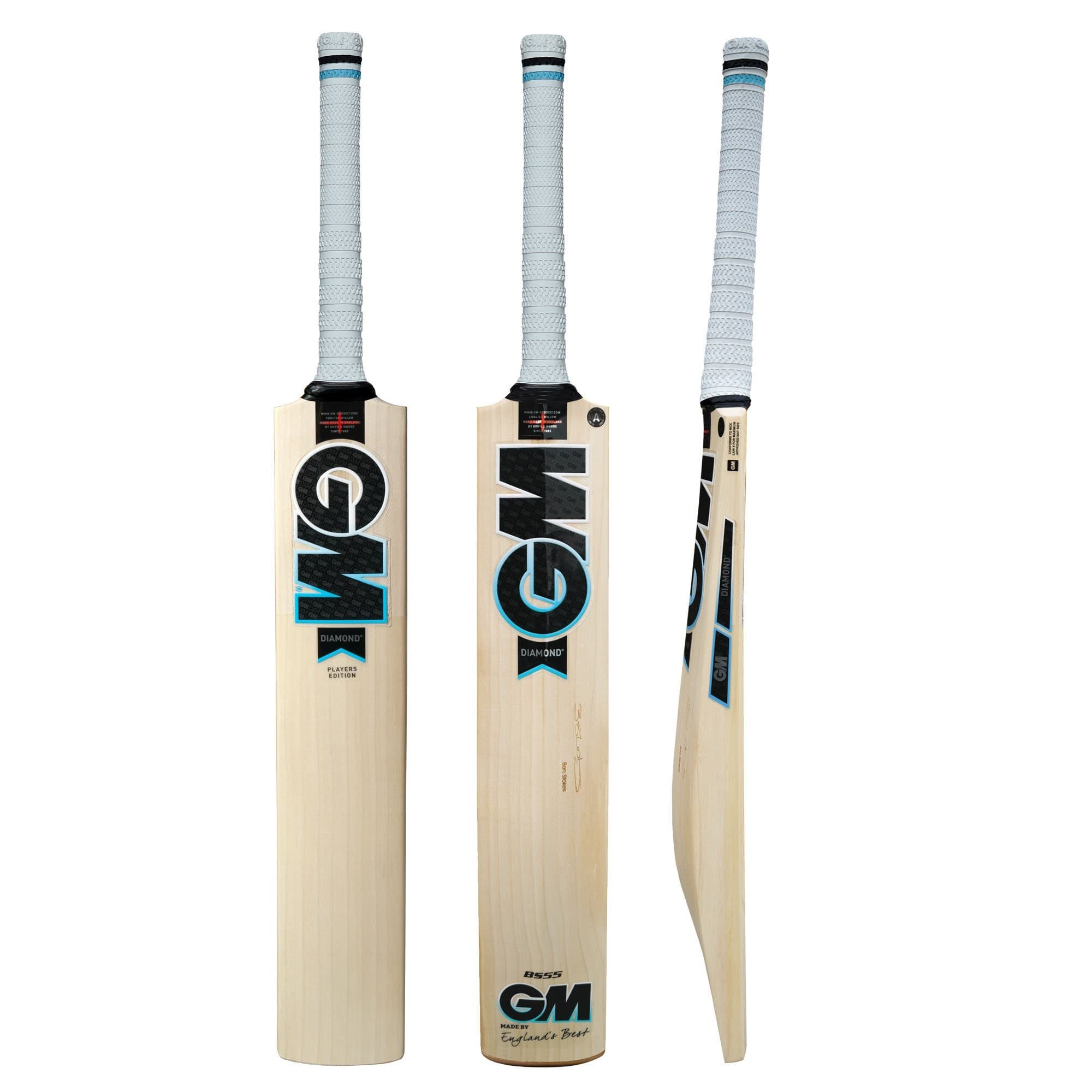 Alright, in at #2 is a bat that was used very well by this player in the English summer. He obviously had a great World Cup, and then he had a great Ashes as well, causing the Aussies a little bit of heartache — it is the Gunn & Moore Diamond Ben Stokes Player Edition. So this is as close a representation to the bats that Ben actually uses, so, his weights, his preferred profile — which, as you can see, is nice and big, mid-to-low, then obviously swooping down to a fairly thin sort of toe.

Ben sort of using bats now about 2.9, mainly 2.10. So, these are obviously fantastic. Obviously, being a Players Edition, you get the best willow that Gunn & Moore has available. So, they are absolutely top-notch. Superb performance, as you would expect in these.

The great thing about this too, obviously — Gunn & Moore do all the prep work for you, so it is knocked-in, it's sleeved, and it comes with a toe guard as well, which is awesome. Being a Players Edition bat — yes it is that higher — in the higher price bracket, so again, you are looking at spending about just under $1,200, but, if you're looking for a bat that one of the best players in the world uses, this could be the bat for you. So, the #2 bat is the Gunn & Moore Diamond Ben Stokes Player Edition. 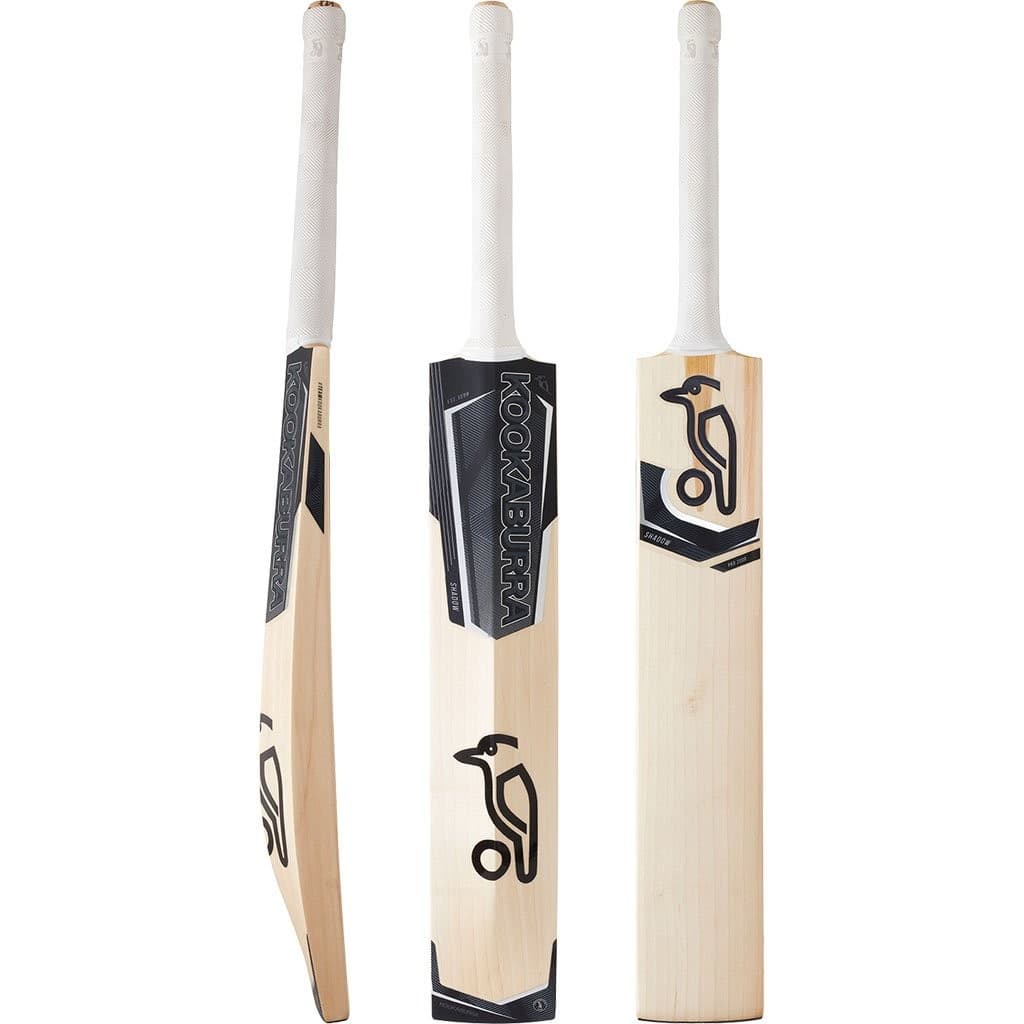 Alright, ladies and gentlemen — it's now time for the #1 bat in our list of Top 10 Bats for this season, and it goes to — the Kookaburra Shadow Pro 2000. So, this is #1 basically because it ticks all the boxes. It's overall a fantastic bat. So, number one — you get it for under $600, so a top-end bat at under $600 is fantastic. The middles and the punch and the performance on these have been superb. Great shape, awesome shape, the willow where you need it, down to that nice shape into the toe, that players sort of preferred shape in that.

Oval handles, so it feels great in the hands, helps with that balance and the pick-up. Weights on these are great, 2.8-2.9, right in that sweet spot, which you want. Awesome — they look good as well, which is important, obviously, those new black graphics make it look cool. So again, it just ticks all the boxes — great performance, great balance, great pick-up, and super value at under $600.

So, if you want a great bat for this season, come in and check out the Kookaburra Shadow Pro 2000. Alright, so that's the list. Hopefully, you agree — if you don't, let us know. Put it in the comments below. Or if you do, put it in the comments below as well. You can check out all our bat review videos, our podcasts are on there, we try and put a lot of content on there.

Related Posts
Just go to the gym for a picture and then spend the whole day on the couch
Announces honorary membership of Karachi Press Club for Sammy and Vivian Richards
We did not find support like Pakistan, Sri Lankan captain
The Multan Sultans believe that they should be declared winners of PSL 2020
Haris Rauf Managed to make his place in the Big Bash's best team
Mani rejected Ganguly's statement regarding hosting the Asia Cup
First Test: Pakistani Team Outscored 240 in the First Innings
Pakistan Cricket Board warns Hafeez over the controversial statement