World-renowned Swiss tennis star Roger Federer has surpassed Argentina's Lionel Messi to become the highest-earning athlete of the year for the first time.

Roger Federer, who has won a record 20 Grand Slam tournaments, is the first tennis player since 1990 to become first-class.

He was fifth on the list last year but jumped four places to top the Forbes list for the first time in his career.

In the last 12 months, Federer has earned $100 million in sports fees and $6.3 million from other contracts.
And before that, in 2013 alone, they had more than this. 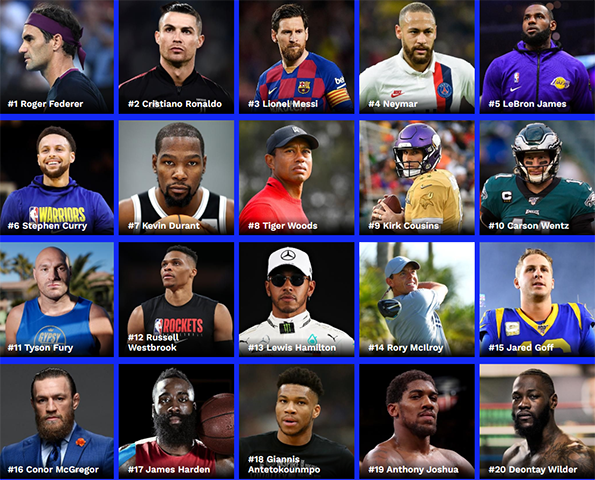 In this list, Federer defeated Messi to take the first position and the Argentine football star is now in the third position after losing his income.

In second place is Messi's rival Cristiano Ronaldo with a total income of  $105 million, while Messi earned $104 million in the same period.

footage of theft in 2 stores of Faisalabad

Related Posts
De Kock appointed as South Africa captain for a one-day series from England
Canada becomes the first country to withdraw from the Olympics
PCB receives Umar Akmal's reply, The penalty is expected to decrease
Dangerous and deadly festival of "Exploding hammers" in Mexico
Coronavirus has been confirmed in Rudy Gobert who mocked the virus during a press conference
'Khel Ja Dil Se' brought back memories of the 92nd World Cup: Waseem Akram
Rizwan Joins the Top 10 Rankings of T20 for the First Time
Karachi Kings VS Quetta Gladiators | Full Match Highlights | Match 6 | HBL PSL 2020