World Cup 2019, a summary of exciting, thrilling and unforeseeable events.

In this chain of cricket events, Pakistan has been able to produce quite some entertaining and unpredictable games in this series.

However, now, The Pakistani Cricket team is up against its neighbor the Afghanistan team.

After a chain of matches some of Fortune and some not, This match indeed is a highly important match for Pakistan as it decides the future of Pakistan’s presence in the future World Cup matches and whether or not the trophy cup will be coming home.

Pakistan in the cricket world today, has a straight history of being highly unpredictable, and of course famous for giving last-minute surprise wins, 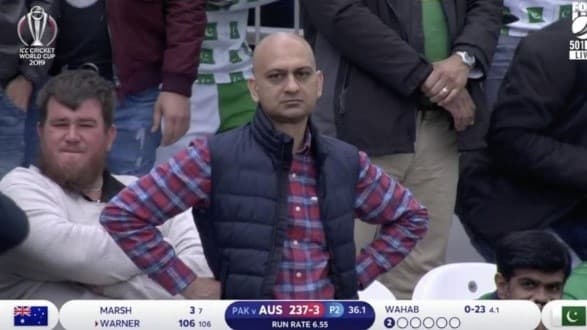 After being defeated by other countries including India, Pakistan teams energy and compassion slightly lessened up, and their confidence shattered.

They were losing hope and inspiration, and of course, their place still is at risk in The World Cup finals.

Then as listed their match was up against the New Zealand which had remained undefeated until their thrilling encounter with Pakistan.

Pakistan didn’t give up and fought like the champions they are with support from the entire nation and sincere commitment, Pakistan was able to beat the undefeated team of New Zealand, by 6 wickets and 5 balls.

Reclaiming their respect and pride and showing their fans that they previously may have lost some battles, but the war is still yet to fight.

AFTER THE A LONG CHAIN OF SETBACKS,

The enthusiastic fans whose hopes were shattered and lost after seeing previous unexpected defeats lit up, and were enthralled again with new hopes, prayers, and support for the team.

This win against New Zealand not only lit up faded hopes but also brought more energy and unity to the fan.

Few of the tweets of celebrities include, 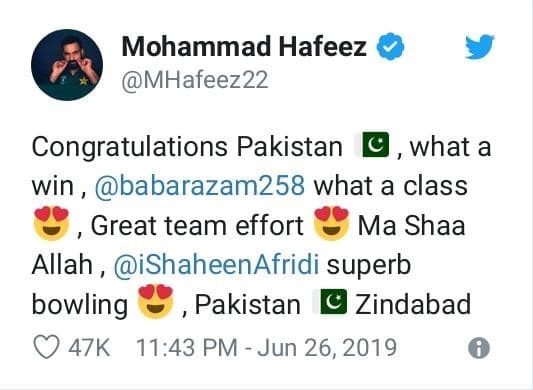 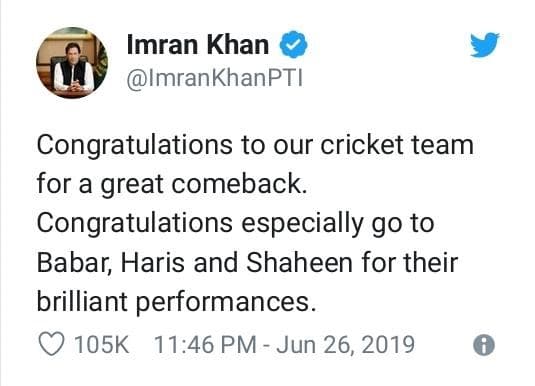 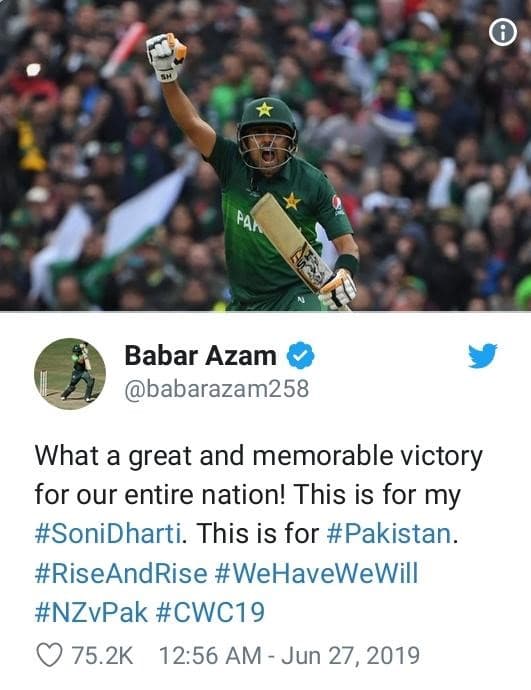 LOVED BY THE ENTIRE NATION OVER ONE  NIGHT,

Babar Azam, The new favorite of the nation by fluke. He indeed gained massive love, support, and respect overnight by his astounding performance in the match of Pakistan against New Zealand, the team indeed was left unbeaten until it was against Pakistan. Babar Azam, the 24-year-old being the star of the day made a golden route for Pakistan to achieve its success by scoring 101 runs to anchor Pakistan’s reply to New Zealand’s score of 237 for six at Edgbaston on 26th of June.

Babar Indeed through interviews sources talks about his opinion about the performance of his team he feels that team was struggling earlier in the tournament but of course, they were confident they could turn their fortunes around and show their true capabilities.

Babar shares his moto as well, which is,

“Belief is the key” and truly he is right as his 10th one-day international hundred off 124 balls with 11 fours, speaks volumes of his belief and capabilities.

In a further interview, he shares, “We have the belief that we will win our next two games and then look ahead.”

But high hope and steady beliefs the 24-year-old player has complete trust in his team and its players and indeed plans to bring the ICC World Cup Trophy back to its home, Pakistan.

Sarfaraz Ahmed the Pakistani Cricket captain in the ICC World Cup 2019. Sarfaraz indeed is an impressive and dedicated player and has extensively done a lot for his team.

But on the contrary, Pakistan’s initial performances did not prove to satisfy the country and its fan for that the team received excessive criticism and backlash.

Sarfaraz of all received end of harsh criticism following his team’s initial run of defeats and hardships which came to an end with their win over South Africa before the amazing result against New Zealand.

Which indeed proved to be a game changer and of increased the hopes, belief, and excitement of the Pakistani Fans.

Sarfaraz who at first was humiliated and criticized by fans, critics and ect were then cheered after his exceptional catch out in the match against New Zealand.

And indeed a great performance overall which set the team back on track with high hopes and more dedication.

Sarfaraz thanked the crowd at Edgbaston. He, however, After the match shared his opinion on the team’s performance felt that more needs to be done on the fielding side to give better results in the upcoming important match which will decide whether or not Pakistan will qualify till the finals or not.

Another match is yet to come that is Pakistan vs its neighbor Afghanistan.

ON THE OTHER HAND,

Afghanistan indeed has not been having a good world cup this cricket season. Afghanistan is not able to help its own cause, Asghar Afghan, their long-serving captain was stripped of the captaincy before the World Cup, which may be the cause of the following misfortunes.

The past few weeks have been very disturbing for the team itself, with 0 wins against almost every team, Afghanistan has not been showing a powerful or favorable outcome for its own benefit

Afghanistan’s previous match with India was a set back for the country itself. Thought the team played forgetting all previous setbacks, They tried to play a good match in the field that day to reclaim some pride, But pride is not anything, but yes it’s a purpose to play and indeed Afghanistan has a lot to make right of.

From onwards that’s all they have left to play for, as winning or qualifying for the finals may not be an option anymore for Afghanistan with zero win streak but hope is still not less for the team as they look forward to putting out a good game and to give off a good challenge to their opponent.

BUT IN THE END,

Thought the chances are high for Pakistan to win against Afghanistan, but it is no hidden fact that’s our team lacks strategy and Fielding tactics, If the teams work harder on its Fielding side with a properly calculated strategy scene with proper estimates, Our team would be able to handle any hurdle to the road of success.

Decision to allow bikes on motorways Challenges in Supreme Court

Related Posts
Message from Dean Jones and Sammy for the little fan angry on the Lahore Qalandars
Roger Federer, Rafael Nadal join Aisam ul Haq's "Stars Against Hunger" campaign
West Indies Captain Jason Holder Best Rankings of Test Career
Maria Sharapova, a world-renowned tennis star announced her retirement from tennis.
WHO WILL WIN THE WORLD CUP 2019
Pre-Series Activities of Team Pakistan in Islamabad.
Bangladesh team can give surprise, will not be easy to imagine, Azhar Ali
PSL 5 begin today and the opening match will be played between Gladiators and United