Sahiba's Son Came Forward in Support of His Mother

Zain Khan, the youngest son of the actress, has given a strong answer to the critics of his mother and said that those who make negative comments should realize that one of their sentences can be a problem for the mental health of others. Zain Khan reacted in his Instagram story after the harsh criticism of his mother by the people and his story was also shared by his father actor Afzal Khan alias Rambo.

A few days ago, Zain Khan's mother, the popular actress of the past, had said in Nida Yasir's Ramadan show that she was fond of having a son and at the same time, she thanked God that in that time God did not give them daughters. The actress further explained that there is a lot of pressure on daughters, they can never do their own thing in life. Sahiba had said that daughters are pressured first by their parents and then by their husbands, they cannot do anything as they wish.

After the statement was made by the actress, she was severely criticized on social media and people had made her realize that daughters are given to the lucky ones and they are at the mercy of God. People had also used harsh language against her after her statement, on which now her young son Zain Khan has broken his silence and sided with his mother and told the people that one of his inappropriate sentences was on the minds of others.

Can have negative health effects. Zain Khan wrote in his Instagram story that his mother had spoken of her desire, on which people used harsh language her while making a fuss. 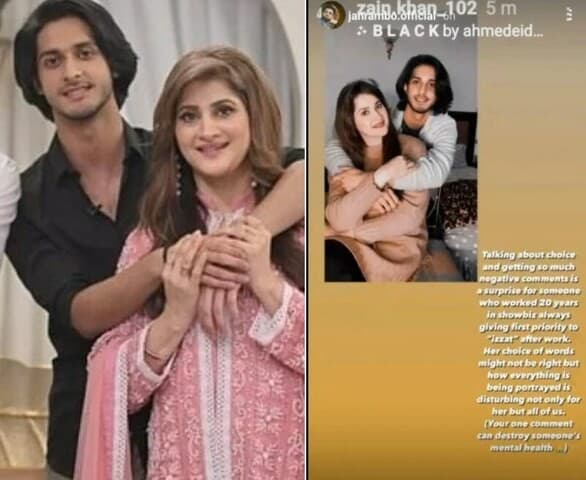 Sahiba's son wrote that the negative comments of the people affected not only his mother but also his entire family and people should keep in mind that even one negative sentence of his can destroy the mental health of others.

The players who won the matches for Pakistan, made them part of the team: Mickey Arthur