He also asked Ayesha Omar if anyone had asked her about the issue she had discussed. On Noman Ijaz's cross-question, Ayesha Omar had said that she had been asked by many people and that she had voluntarily narrated the events that happened to her. He said that when he saw that many people were talking about the incidents of 'sexual harassment that had befallen him, he too got up the courage and then he also thought that by talking to him, hundreds more girls would have the courage she will talk too. 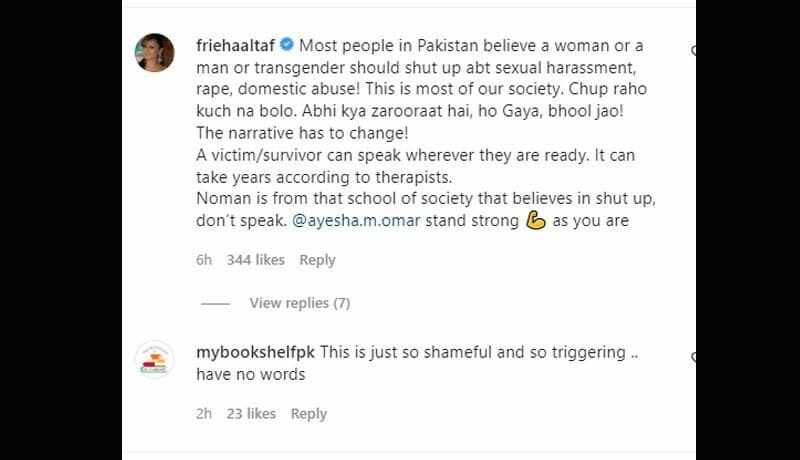 However, Noman Ijaz is being criticized for asking Ayesha Omar about sexual harassment during the program. The video of Noman Ijaz's questions was also shared by various social media platforms, where most people termed the host's behaviour as inappropriate. Former model, actress and fashion stylist Fareeha Altaf also commented on his video, and he wrote that in our society, there is a common impression that any woman, man or eunuch is being abused or sexually harassed. Incidents such as rape and domestic violence should not be discussed. "Most people in our society say to the oppressed, 'Shut up, don't say anything, what is needed now, done, forget it,'" he wrote. Criticizing the host, he noted that Noman also belongs to the class that keeps saying "don't say anything". 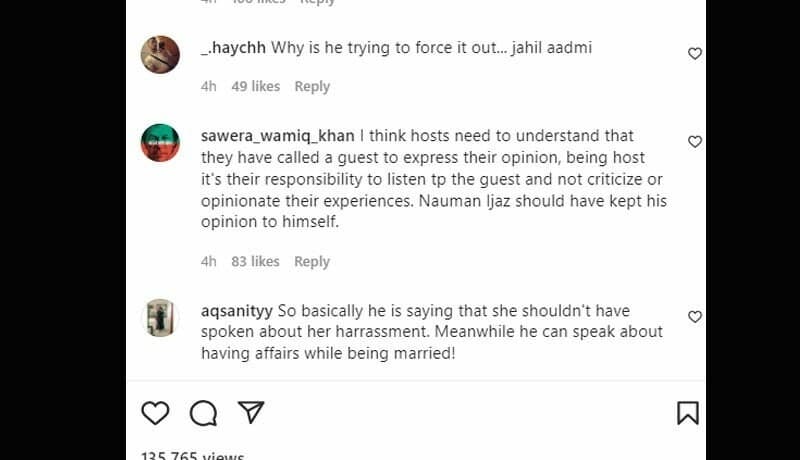 He wrote in his comment that psychologists say that it can take many years for a victim to describe what happened to him. Others like Fareeha Altaf criticized Noman Ijaz and termed his questions as inappropriate. Some called Noman Ijaz "ignorant," while others used harsh words against him. It is believed that Ayesha Omar had initially revealed in January 2020 that she had been sexually harassed several times in the showbiz industry, but she did not name anyone. He later spoke on the same issue in August 2020, stating that he had been hiding his sexual harassment for 15 years.

Even after that, Ayesha Omar continued to speak openly on the issue and said that she was sexually harassed in her childhood and in the showbiz industry for many years, but she did not name anyone. He also revealed in an interview that many people and brands had asked him to call the perpetrators of 'sexual harassment, then he would be given more work, but he never gave up. Didn't name the wrongdoers.

An Important Meeting of the Federal Cabinet is Underway

Related Posts
'The Power Puff Girls' Will Be Back in a New Style Soon
Admittedly, We Have Not Been Able to Create a Good Film Industry, Fahad Mustafa
My Mother Also Suspected That I Married Usman Khalid Butt, Maya Ali.
Pakistan's First Military Reality Show Ready to Air
Sahiba's Son Came Forward in Support of His Mother
Nida Yasir's Advice to Sajjal Aly to Live a Happy Life
Saba Qamar Was Stunned When the Man Who Was Marrying for Love Offered Her Marriage
Saba Qamar Starring in “Kamli” film by Sarmad Khoosat - Gossip Pakistan