A researcher from Sweden says arms exports have increased globally due to increased demand from countries in conflict, but there has been a significant gap in exports between the US and Russia.

According to the Stockholm International Pursuit Research Institute (SPRY), global arms exports have increased by 5.5% over the period from 2010-2014, from 2015 to 2019.

Peter Weizman, a senior researcher at Spree, said that 'overall arms transfers have increased, demand in arms-importing countries has increased'.

Shipments from the United States increased by 23%, followed by 36% of global arms exports. 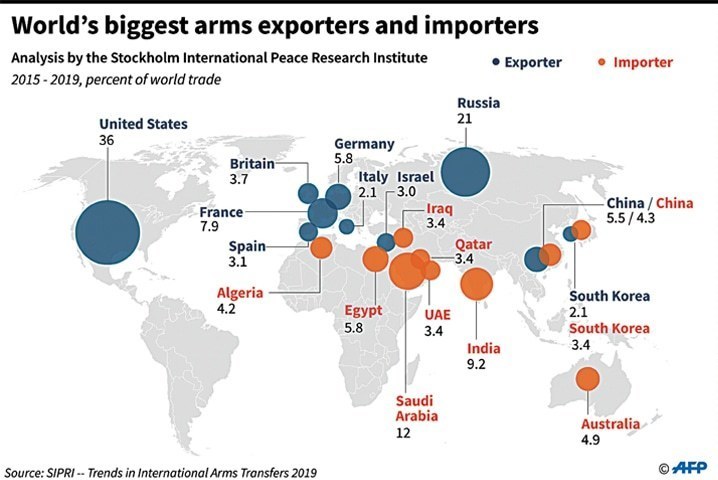 Between 2015 and 2019, the United States provided major weapons to 96 countries.

Half of US arms exports go to the Middle East and half of it is Saudi Arabia, the world's largest arms importer.

Related Posts
Sindh: 3,000 volunteers including doctors, IT specialists registered in one week
Oman's big announcement to prevent the Corona virus
Petrol Prices Rise in Pakistan
PTV Management Apologizes to Rashid Mahmood for Their Mistake
Request for the release of Mir Shakeel ur Rehman, Order to NAB to submit response
South Korea: Dance bars and nightclubs cause Corona to spread again
Former Popular Actress Firdous Begum Has Passed Away
Mobile thieves get involved in wedding receptions in Faisalabad