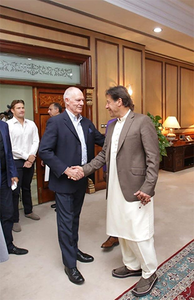 During the conversation, the Prime Minister inquired about the cricketers' goodwill and thanked them for their arrival in Pakistan.

The meeting took place in a cheerful atmosphere and Imran Khan and Vivian Richards reminisced about the old times.

Vivian Richards said that when Imran Khan was captain, matches between Pakistan and the West Indies were always very interesting and it is a great pleasure to see cricket restarting in Pakistan.

The Prime Minister said that the services of foreign cricketers will always be remembered for the restoration of world cricket in Pakistan.

Pakistan, Iran, Russia, and China urge Afghan groups to agree to a ceasefire