Yesterday, the Ulema Board issued a 10-point code of conduct for the establishment of peace in Muharram. In order to implement the code of conduct, all religious forces of the country at all levels cooperated with the government and national security agencies from the platform of Ulema Board.

Maulana Muhammad Asim Makhdoom, Chairman, Masalak Ulema Board, Jamia Masjid, Kubra, New Samanabad, Lahore, while issuing a code of conduct to the media, said that sectarian riots have hollowed out the foundations of Pakistan as Muharram approaches. Pakistan is the only all-encompassing platform that is active against bullying, racism, and extremism. The key points of the agreed code of conduct are as follows 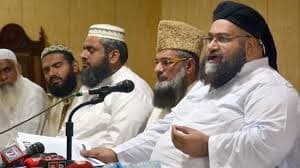 Maulana Muhammad Asim Makhdoom said that committees have been set up at all levels to implement the code of conduct under the Board of Masalak Ullama which will play its full role in dealing with any emergency situation. Has appealed to the Chief Ministers, Chief Secretaries, IGs, Home Secretaries, Prime Minister of Azad Kashmir, and Chief Minister of Gilgit-Baltistan to cooperate for full implementation of the Code of Conduct.

Fawad Chaudhry Explain the Reason why He Slapped Mubashir Luqman

Artists Who Separated Ways in 2020