Protests and religious gatherings were banned by the federal and provincial governments due to the spread of the coronavirus.
However, condolence processions were held in Punjab and Sindh on the occasion of Youm e  Ali while mourning ceremonies were organized in different parts of the country.

Pakistan Peoples Party Chairman Bilawal Bhutto Zardari had appealed to the people to hold Friday prayers and a limited number of mourning ceremonies at home following the government's instructions to stop the spread of Coronavirus.

Last night, however, police placed containers in the areas of Saddar and Arteries, adjacent to MA Jinnah's main highway, to provide security for the expected Youm e Ali procession. 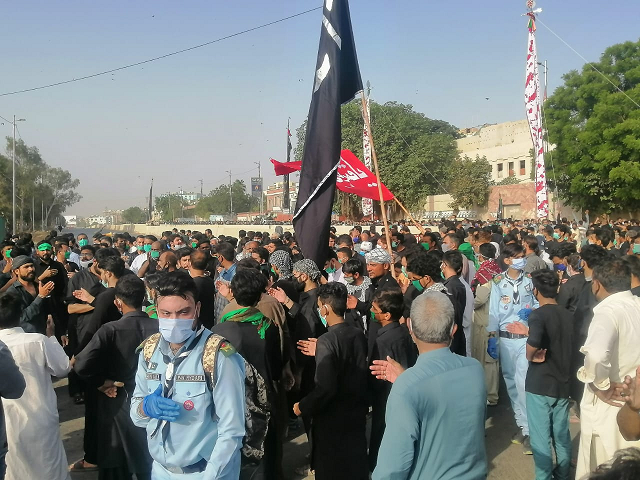 No stand was taken by the police and officials and the Sindh government in this regard, however, sources said that the police made these arrangements due to the possibility of a procession despite the ban.

Therefore, Youm e Ali was celebrated in Karachi with traditional religious devotion and respect and the main procession passed through its designated routes and ended at the Husseiniyya Iranian Imambargah Kharadar.

Meetings were held on the occasion in which government SOPs were fully implemented, participants used masks and sanitizers, including mutual distance.

In addition, disinfectant sprays were also used by the administration at the venues of the procession corridors and the participants only participated as per the list issued.

It may be recalled that the Sindh government had issued a notification on Wednesday night banning all religious gatherings and processions.

Related Posts
Supreme Court: The court intervenes if government plans fail the transparency test
Can Corona Virus Re-Infect Even After Healing?
Forbes Releases List of 10 Highest-earning Hollywood Actresses
Global companies are investing by the Prime Minister's efforts
Up to 10% increase in salaries of employees, including daily wage earners of utility stores
Names of officers benefiting from Income Support Program should be made public, PM
Federal Cabinet approves publication of IPPs inquiry report
Good news for the economy increased domestic production