US President Donald Trump is on a two-day visit to India these days where he says the US has "very good relations" with Pakistan and hopes the tensions in the region will ease.

On the eve of India's visit, the US President addressed a rally called 'Namaste Trump' in Ahmedabad, Gujarat's largest city. Most of the attendees wore white caps.

In his address, the US president said, "The US and India are determined to stop the terrorists and fight their ideology, which is why he took office." "My administration is working very positively with Pakistan to take action against terrorist organizations and militants operating along the Pakistani border."

Continuing his talk, he said, "The relations with our Pakistan are very good, the credit goes to these efforts, we are beginning to see signs of great progress with Pakistan and we are reducing stress, greater stability." And hope for a better future for all the nations of South Asia. '

With the arrival of Donald Trump in Ahmedabad, more than 100,000 people were present at the world's largest cricket stadium for the biggest rally of his political career. 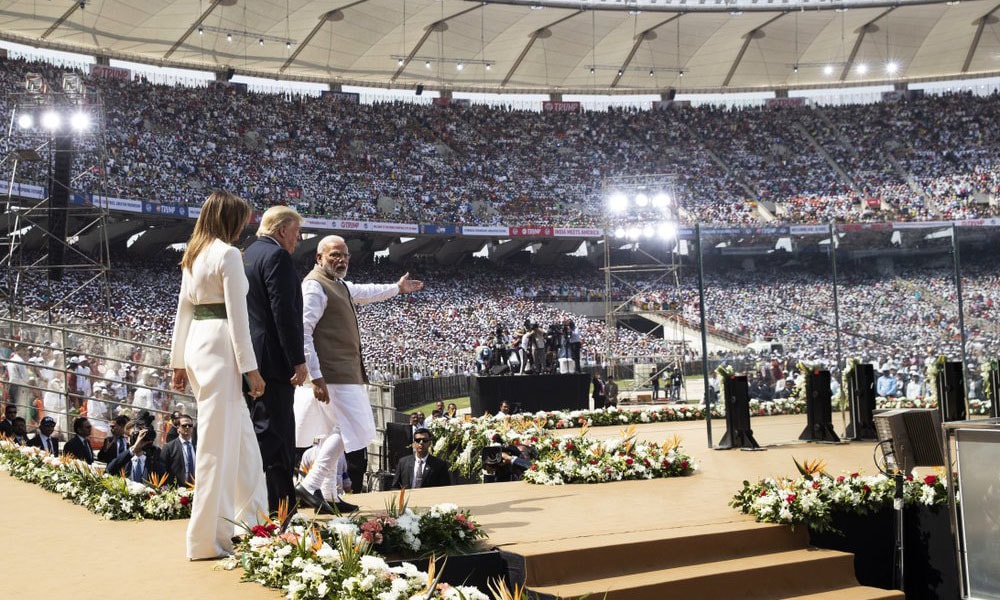 US president addresses large gathering - Photo: AP
Donald Trump, at the beginning of his speech, said he travelled 8,000 miles to convey the message that "America loves India and America respects India, while America will always be a sincere and loyal friend of the Indian people." At the same time, Donald Trump has described Narendra Modi as a 'very successful leader'.

In his address, the US President said that the United States was ready to provide India with defence equipment from drones to helicopters and missile systems.

Donald Trump said he was looking forward to expanding space cooperation between the two countries, adding that an "incredible" trade agreement between the two sides was at the final stage.

Addressing the rally, he also mentioned the attack on extremists and said, "In my administration, we have given full control to the US military over the killers of ISIS and today the regional caliphate of ISIS has been 100% destroyed." Al-Baghdadi is dead, claiming.

However, in his address, the US president did not speak on the protests over India's citizenship law.

Related Posts
Family interference in marital affairs a major cause of divorce in Saudi Arabia: Nisreen Al Ghamdi
more than 75% of Karachi Circular Railway (KCR) has been cleared of encroachments
2019: Inflation in December was 12.63 percent
The first match of the T20 series will be played in Pakistan and Bangladesh today
All three Bollywood Khans do break silence on controversial citizenship law
Australia rejects China's threat of 'economic repression' over corona virus probe
Nokia has introduced a total of 3 new smartphones, including its first 5G phone
Another scandal after theft of wheat worth Rs 15 billion in Sindh