Legendary comedian, actor and host Omar Sharif, who had been in hospital for the past month and a half due to heart, kidney and diabetes, has died in Germany.

Pakistan's Ambassador to Germany Dr Muhammad Faisal confirmed in his tweet that Omar Sharif had met Khaliq Haqiqi, and also expressed deep sorrow and grief to the actor's family.

With deep sorrow it is announced that Mr. Umer Sharif has passed away. In #Germany. Our deepest condolences to hie family and friends. Our CG is present at the hospital to assist the family in every way.

Meanwhile, President of Karachi Arts Council of Pakistan Ahmad Shah while talking to Dawn.com confirmed that according to the family of the legendary actor, Omar Sharif is no longer among the fans.

Many other important political, social and showbiz personalities also tweeted about the demise of the legendary actor and comedian and expressed deep sorrow and grief over his death.

Senior journalist and host Waseem Badami confirmed in a tweet that Omar Sharif had left the fans.

He said in a series of tweets that senior comedian and actor's wife Zarin Ghazal confirmed that the actor had met Khaliq Haqiqi.

Omar Sharif had been ill for more than a month and a half and was being treated at the Aga Khan Hospital in Karachi. He is suffering from heart disease, kidney disease and diabetes.

The Sindh government had on September 14 released funds of Rs. 4 crore for the treatment of Omar Sharif.

He was airlifted to the United States from Karachi by air ambulance on September 28 for treatment of a heart condition.

Omar Sharif had been seriously ill for the past two days and had contracted pneumonia, but doctors expected him to recover, after which he would be transferred to the United States for further treatment. To meet the real Creator.

Omar Sharif was supposed to go to US for treatment but his health deteriorated during the trip and he was admitted to a German hospital. 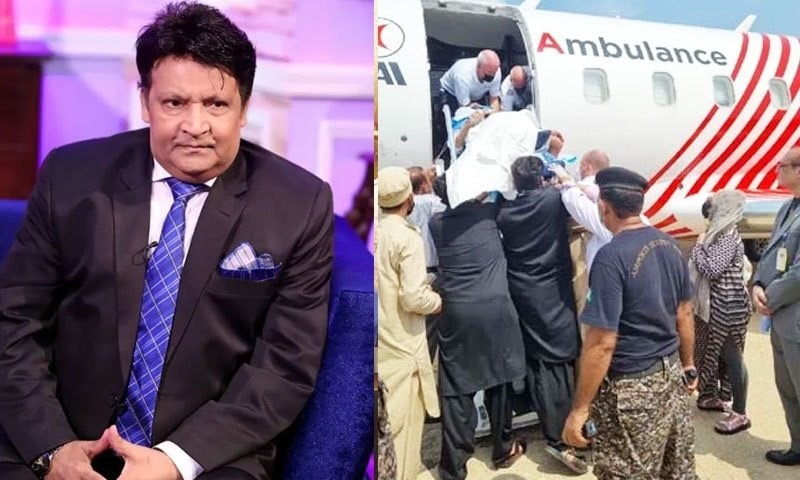 There have been various rumors on social media about the legendary actor's illness that he has other incurable diseases besides heart disease, however, his family had denied such reports.

Rumors of the legendary comedian being diagnosed with cancer spread in 2017, after a picture of the actor taken in a hospital bed went viral, prompting rumors that he was suffering from a serious illness, but his family is still alive. Explained that he had a minor chest infection.

Omar Sharif began his career in the 1970s. His real name was Muhammad Omar. He was very much influenced by Pakistani comedian Munawar Zarif and considered him as his spiritual teacher, so he followed in his footsteps and shaped his comedy.

He started his career at a very young age and first appeared in plays at the age of 14 and then spent his entire life on screen, screen and theater.

He wrote several timeless stage plays, including 'Bakra Kastoon Peh'. Omar Sharif's theatrical play was the one that brought him worldwide fame.

Omar Sharif had 3 marriages, his wives are Diba Omar, Shakeela Qureshi and Zarin Ghazal, he has 2 sons from the first wife only, he had a daughter who has passed away. According to Sharafat Ali Shah, a close friend and fellow actor, the real reason behind Omar Sharif's illness was stress. He also dominated his professional work and then the problems of his private life also gripped him.

Due to Corona, worship can be restricted in Ramadan, Ayatollah Khamenei

World Health Organization is biased with China, US President

Thousands of Pakistanis look forward to returning from the UAE