The government is dealing with Corona properly, according to 82% of Pakistanis

The steps taken or announced by the government of Pakistan to deal with an epidemic like the coronavirus are not limited to mere statements but many people in Pakistan are also happy with the government's actions.

The international survey organization Gallup, in collaboration with the Gallup Survey of Pakistan and Gilani Survey, conducted a survey on the steps taken by the government regarding coronavirus during March and April.

During the survey, people were asked various questions about the steps taken by the government to deal with the coronavirus, and these questions were asked twice in two different periods.

The same question was asked by the Gallup poll to the public in March and again in early April, and according to the results of both surveys, most Pakistanis believe that the government is dealing with Corona very accurately.

Earlier in March, 60 percent of Pakistanis thought the government was dealing with Corona properly 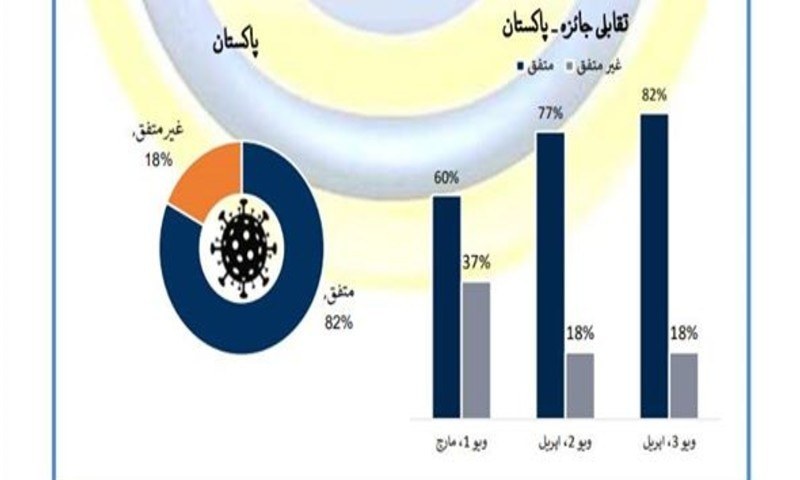 And in one month, the number of Pakistanis thinking so increased by 22%, and by the beginning of April, 82% of Pakistanis thought the government was doing the right thing.

The survey was conducted by Gallup International in 17 different countries of the world including Pakistan and these countries include the USA, Japan, Russia, Italy, Thailand, Switzerland, Germany, Kazakhstan, South Korea, Indonesia, Bulgaria, Philippines, Argentina, Austria. , India and Malaysia.

According to the survey data, out of the 17 countries mentioned above, Pakistan was ranked fourth among the countries that took better measures in the eyes of the people regarding Corona.

Related Posts
Due to political pressure, the government stopped raising gas prices
Prime Minister Imran Khan will attend the 'World Economic Forum' meeting
Rizwan Beyg and Sahir Ali Bagga to be honored with Civil Award
Internet Service have bean Affected in Pakistan
Ummah has no voice today because we are divided : PM Imran Khan
PM Imran Khan On Fire
Occupied Kashmir: A case filed against a female journalist who interpreted torture with pictures
Karachi: Refusal to Give Woman a License to Ride a Motorcycle