KARACHI: The last eclipse of the year 2019 has started in various parts of the world including Pakistan.

According to the Meteorological Department, the eclipse in Karachi started at 7: 34am minutes, reaching a peak at 8: 46am and ending at 10: 10am.

According to the meteorological department, the eclipse will be seen across the country while Karachi and Gwadar will be more prominent. 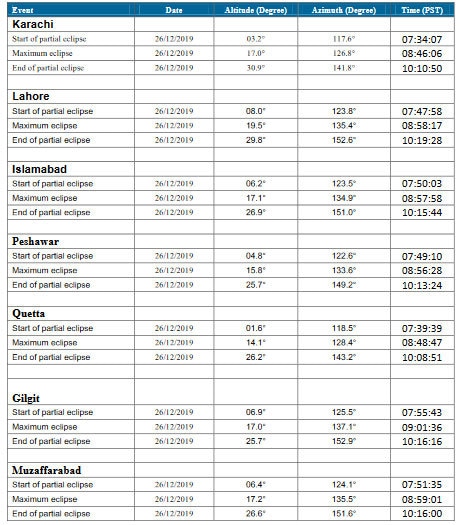 Solar eclipse being observed in Pakistan after 20 years — Photo: Meteorological Department website
In Gilgit, the eclipse began at 7 am and 55mins, which reached a peak at 9 am and ended at 10:16am.

In Muzaffarabad, the eclipse started at 7 pm on 51 minutes, which would end at 10:16m after reaching the peak at 59pm.

It should be noted that the eclipse was observed in Pakistan 20 years ago, before it was seen in August 1999.

Today's eclipse is not a full eclipse, but an annular eclipse, which means that the moon will not be able to hide the sun completely and the 'colour of fire' will be visible in a circle. The edges will be bright.

This unusual and historic solar eclipse will be radically different from the eclipse that took place in August 1999 due to 'albedo effect'.

During the eclipse, people are advised not to look at the sun with a normal eye because it can cause permanent damage to the eye or even vision.

Beliefs and observations about Eclipse

It should be noted that many eclipses are also associated with the eclipse, with some saying that eclipse can bring about major changes in world politics, including the transfer of power.

With regard to Pakistan, it should be remembered that within two months of an eclipse in 1999, the government had fallen.

In addition, other faiths include the idea of ​​fear, in ancient China, the Lofts gathered together to fight the effects of the eclipse.

They believed that a big snake was eating the moon that needed to be stopped by a noise.

In addition, some believe that pregnant women should not go out during the eclipse and stay away from sharp objects.

One of these ways is that germs come in during the eclipse, so all food items are covered or kept in the refrigerator.

On such occasions, a general holiday is also announced in some countries.

Along with this, people also associate life and death with the eclipse, so special worship is also performed on this occasion and animals are sacrificed or there are charity and charity.

In addition, prayers are offered in mosques in other Islamic countries, including Pakistan.

Will Indian films be made by the name of Deadly Corona and Corona Pyar Hai?