Sindh: 3,000 volunteers including doctors, IT specialists registered in one week

KARACHI: The Sindh government has recruited 3,000 volunteers, including 30 doctors, 300 information technology experts, in less than a week after an appeal to curb the rapid rise in the number of Coronavirus cases.

Government officials and sources said that the most "overwhelming response" received from the people of Karachi was that the authorities were forced to stop the recruitment till the next step.

It is to be noted that due to the increasing number of coronavirus cases in Sindh, the provincial government has announced the recruitment of volunteers who can assist in the campaign of the authorities to prevent the outbreak.

The provincial government had appealed to people from all walks of life to 'hold emergency institutions'.

Less than a week later, 3,000 people were registered for the purpose, which comprises the majority of young people.

About 3,000 registered volunteers have 35 doctors and 300 IT specialists, said Dr. Salman Shah of the provincial Disaster Management Authority (PDMA) Sindh.

"We have divided these volunteers into three levels, with one category of health volunteers, including doctors, paramedics, and pharmacists in the other category," he added. Included.

In addition, the third category includes volunteers who have been placed in the general category and will be given different responsibilities for implementing government policies. 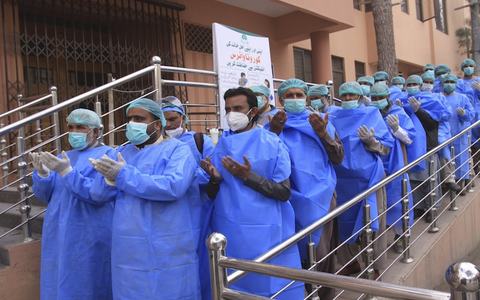 The decision to recruit volunteers came at a meeting with the chief minister of PDMA, Sindh, which expressed concern that if more cases of coronavirus emerged, the caretaker and the virus Prevention efforts may be lacking.

Dr. Salman Shah said that a number of volunteers have started working and many more are ready to contact relevant agencies to do their part.

"In the first phase, we have decided that they should not be placed on the front line of this challenge but should be kept behind," he said.

He added that the PDMA has received a 'stronger' response than expected and that the process of recruiting new volunteers has been halted.