After Pakistani film producers, a number of Pakistani showbiz personalities have also expressed anger over cinema owners giving more importance and screens to foreign Hollywood films than local films on the occasion of Eid-ul-Fitr and demanded that Pakistani movies be banned. Show more

Two days ago, Pakistani filmmakers had alleged during a press conference that cinema owners had replaced the films released on the occasion of Eid-ul-Fitr with 'Chakkar, Ghabrana Nahi Hai, Dum Mastam, Remain in the Screen, and Tere Bajra Di Rakhi.' The Hollywood movie 'Doctor Strange: And the Multi-Verse of Madness' started showing on the screens, due to which the earnings of local films were limited.

After the filmmakers, now many showbiz personalities have also expressed anger over the attitude of cinema owners and demanded that they allocate half screens for Pakistani films. Adnan Siddiqui, an actor, and producer of the film 'Dum Mustam' released on Eid, also complained about the under-screening of Pakistani films in cinemas.

Releasing Doctor Strange could have waited for a few days. The last thing we need when the industry is finally opening up after two years is some foreign film hijacking our screens and relegating us in a corner. Home grown cinema has more right any day. @CMShehbaz @Marriyum_A pic.twitter.com/xtzO1o5QLg

In his tweet to Information Minister Maryam Aurangzeb and Prime Minister Shahbaz Sharif, he mentioned that the release of 'Doctor Strange' could have been stopped for a few more days, as cinemas were open in the country after two years. Due to this, local films are not being shown.

Actress and writer of Adnan Siddiqui's film 'Dum Mastam' Amar Khan also complained about the attitude of cinema owners in his video and said that audiences in the country want to see Indian movies but under the guise of patriotism. So the ban has been imposed, but Hollywood films are not being stopped for the sake of national cinema.

He claimed that Pakistani films were earning good money, but local films were being pushed back by releasing them on fewer screens. Actor and singer Farhan Saeed also requested the cinema owners to support the local industry by showing more Pakistani films on the screens instead of foreign movies.

In these difficult times post covid , I stand with all the Pakistani films makers who despite all the difficulties had the courage to come up with their movies and request the cinema owners not to prefer foreign content over local. #supportpakistancinema

At the same time, he wrote that he made films with great difficulty from Pakistani filmmakers because of Corona, and they needed help. Actress Zhalay Sarhadi also expressed frustration over the importance given to Hollywood films by local cinema owners over local films and voiced solidarity with Pakistani film producers. 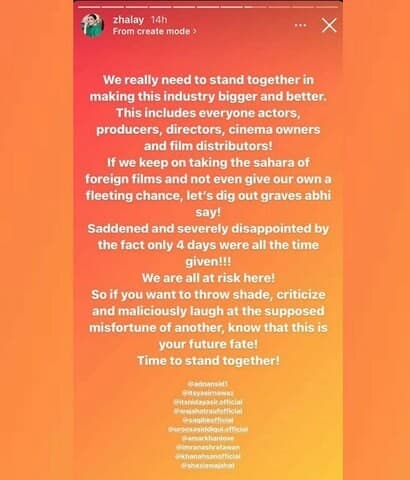 Important instructions of the Prime Minister to reduce electricity prices

Related Posts
Delay in meeting between Saudi Arabia and Russia, further drop in oil prices in the global market
Watch the last episode of "Mere Pas Tum Ho"
The House Shown in 'Parizaad' Drama Is Offered for Sale for Rs 60 Crore
Pakistan has become the 24th largest country in the world in terms of coronavirus cases
Jahangir Tareen will never be against PTI, Zulfi Bukhari
Bad news for foreign engineers working in Saudi Arabia
Informing the world of illegal actions in occupied Kashmir: Foreign Office
Occupied Kashmir: A case filed against a female journalist who interpreted torture with pictures