Leader of the Opposition in the National Assembly and PML-N President Shahbaz Sharif sought respite for appearing before the National Accountability Bureau (NAB) in the money laundering case.

In this regard, Shahbaz Sharif's reply to NAB stated that medical experts advised him to restrict his movements in view of the deadly risks associated with COVID-19 as he has battled the cancer-like disease.

It may be recalled that Shahbaz Sharif was summoned by the NAB in the aforesaid case on April 17 and was asked to provide full details of his foreign assets and other business in the said case.

In a recent questionnaire sent to Shahbaz Sharif, the NAB had said that various notices were issued to the President of the PML-N along with the questionnaires, but the answer was 'unsatisfactory, incomplete and ambiguous'.

At the same time, Shahbaz Sharif was asked to provide full details of the revenue of his business which he has disclosed to the Federal Board of Revenue. 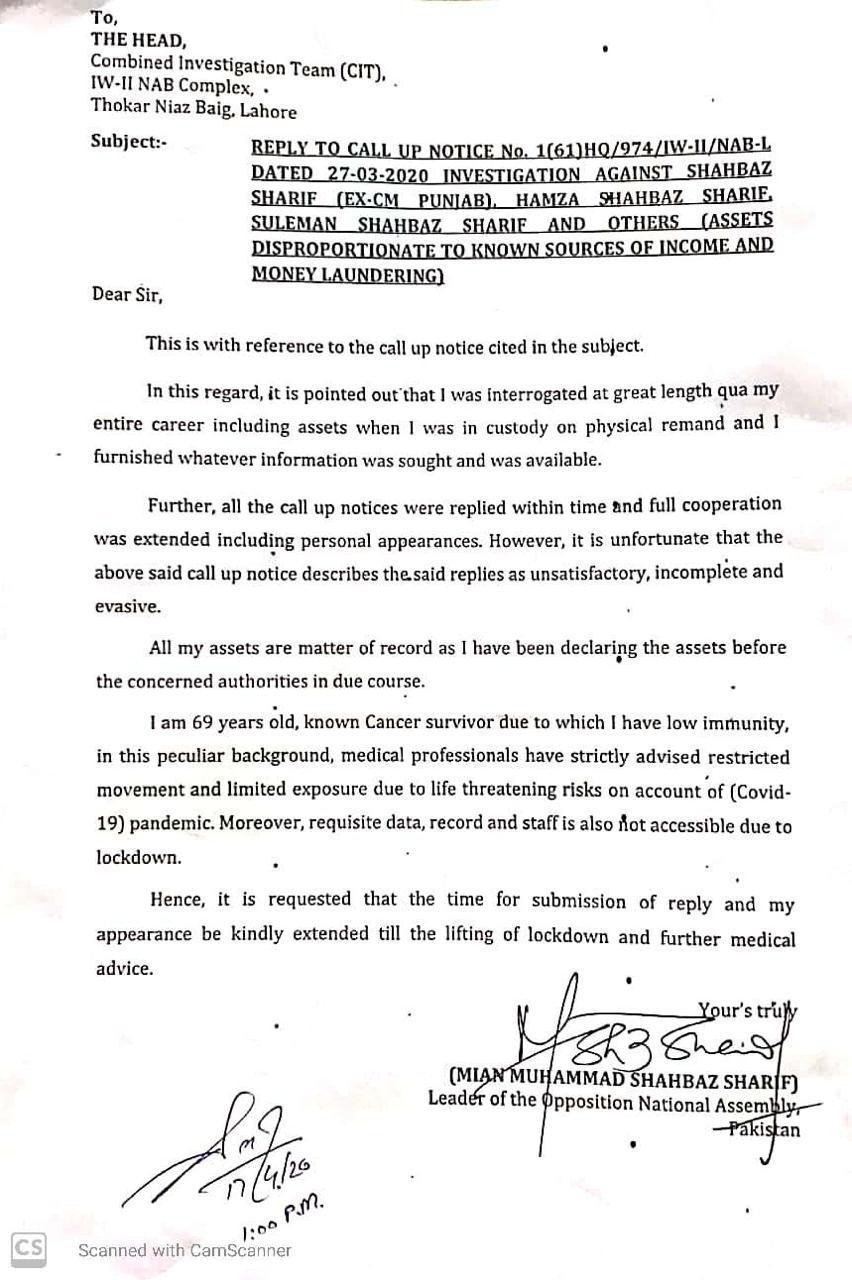 Answer by Shahbaz Sharif - Screenshot
In addition, be aware of their investment, its volume, and expenditures during their Model Town residence camp office.

The notice was submitted today by Shahbaz Sharif, in which he said that NAB has repeatedly questioned his assets and his assets when he was handed over to NAB on physical remand and any information sought from him.

"All notices of the student were answered in a timely manner and all co-operation, including personal appearance," he said.

The president of the PML-N said it was regrettable to say that the response to the notice of notice was inaccurate, incomplete and vague.

Further, he said that all his assets are on record and he informs the management of all the details related to his assets.

Describing the reasons for not being present to the NAB, Shahbaz Sharif wrote that I am a 69-year-old cancer survivor and therefore my immune system is weak and medical experts have asked me to restrict the transport because of the coronavirus. There are risks to life.

At the same time, he said that the data NAB requested was not available due to lockdown

Earthquake Tremors have been felt in Different Parts of the Country