After the decline of new cases in China, which is considered to be the epicenter of the Coronavirus, where partial normalcy was resumed in cities just last month, tourists are now seeing a surge in tourist destinations.

New cases of Coronavirus have been reported in China since the beginning of March last month, while temporary hospitals designed to treat Corona patients have also been closed.

In China, a total of 82,000 people have been infected with Corona, out of which 78,000 have recovered while 3200 have died and around 3,000 Corona patients are still under treatment.

In China, in March of last month, routine life began to resume after new cases of the Coronavirus were dropped, and closed cinema halls, entertainment venues, and other tourist and public places were also opened.

And now the routine is seeing a recovery in life and the rush is now being seen in public and tourist places that have been closed for almost three months, which is why experts are also worried.

According to US broadcaster, CNN, tourism, and recreation sites have also been opened after normal life was restored in China, while experts were alarmed at the increased spread of the Coronavirus to some tourists. ۔ 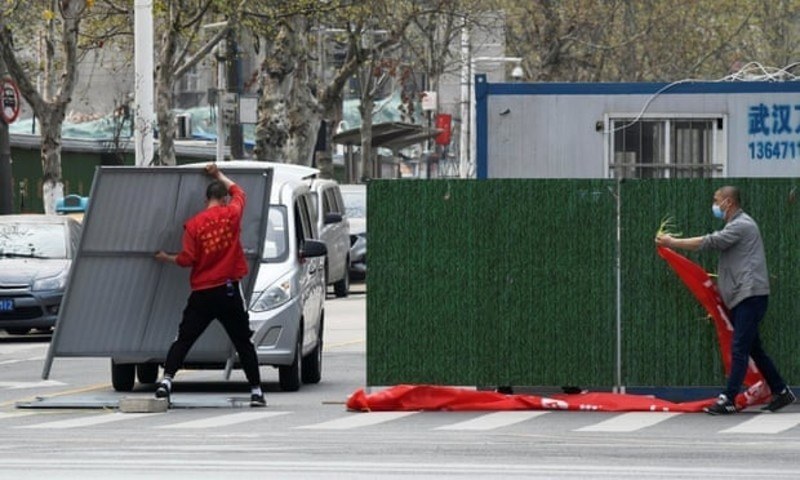 Lockdown begins March 22 in Wuhan, a Chinese city known as the center of the Coronavirus — Photo: Reuters
The report quoted Chinese news agencies as saying that thousands of people could be seen walking around the tourist spot in the photos that emerged April 4 from Huangshan Mountain Park, in the foothills of the mountains in Anhui Province, China.

The report said that after several weeks of business life being suspended there was a rush of people after the entertainment sites opened and people were taking other protective measures, including wearing face masks, but with the gathering of thousands of people simultaneously. Experts have raised concerns.

Experts fear that the gathering of thousands of people in one place could spread the Corona epidemic again, but Chinese authorities have only opened public and recreational sites after security arrangements.

Thousands are arriving thereafter the opening of Huangshan Mountain Park, while the administration has set up boards outside the park that no more than 20,000 people can be allowed into the park daily.

According to health experts at a time when Corona is spreading all over the world, a crowd of thousands in China has raised concerns that the Corona epidemic may rise again.

Like Shanghai, the capital city of Beijing is on the verge of business life, and there is a rush of people.

Zheng Chang, head of the Chinese Center for Disease Control and Prevention, also said that China has not yet been fully protected from the Coronavirus epidemic, nor has Corona completely disappeared since public places opened and Lockdown eased.

Related Posts
The first locally-transmitted case of the Corona virus in Pakistan
'Jamia Masjid is not in Pakistan where protests are not allowed'
South Korea the second most affected with Coronavirus country after China
British MPs seek response from UK government over Delhi riots
Corona virus: Aiza Khan's advice to make face mask a part of fashion
Punjab Government dissatisfied with Nawaz Sharif's medical reports
Trust has been created to oversee the construction of the temple in place of Babri Masjid, Modi
Lollywood's 'Ranjha' Ejaz Durrani has passed away