It may be recalled that earlier on April 30, PEMRA had also imposed a fine of Rs 1 million on Neo TV for violating the rules and regulations.

However, PEMRA has now suspended his license for permanent violation of the rules by the channel.

A statement issued by PEMRA said that Neo TV had been warned to stop violating the license category and stop broadcasting illegal news and current affairs programs under the license rules and regulations. 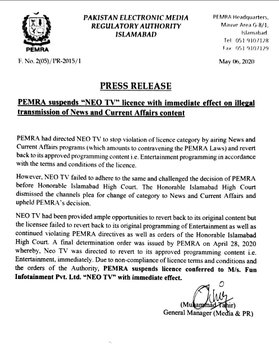 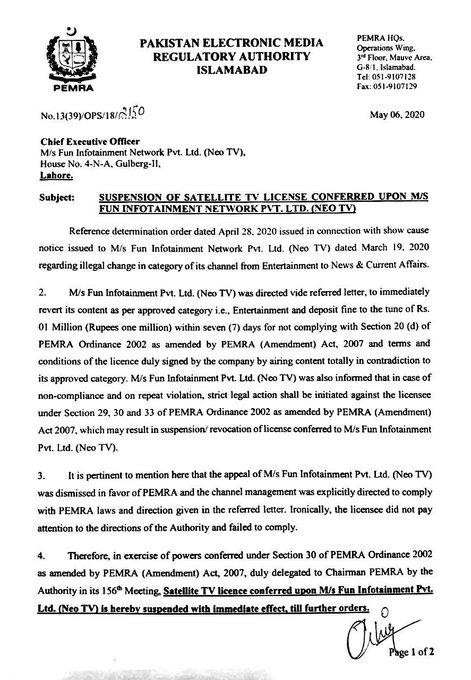 The statement said that instead of following these orders, the channel had channeled them in the Islamabad High Court. However, the court rejected the appeal of Neo TV and upheld the orders of PEMRA.

PEMRA said that Neo TV provided several opportunities to broadcast original content but failed to return to the original Licensed Entertainment programs.
And along with the orders of PEMRA, he also violated the order of the respected Islamabad High Court.

According to the Pakistan Electronic Media Regulatory Authority, a final notice was issued to the channel on April 28 regarding the immediate broadcasting of original programming material but they did not comply with it, hence PEMRA immediately suspended the license of Neo TV.

On the issue, a PEMRA official had said that "the issue of airing the news of the Prime Minister's salary hike on the channel was raised during a talk show".

The notice stated that the channel had violated the 2015 Code of Conduct and had not formally denied it.

It may be recalled that most of the decisions of PEMRA end in litigation and the 500 cases filed against PEMRA are related to the decisions and fines given by it.