On the viral dance video of actress Mehwish Hayat, showbiz personalities praised her and termed her dance as the best.

Recently, Mehwish Hayat shared a video of his dance on Instagram, which many people liked.

The actress can be seen in the video on American rapper and singer Giveon's song "Heartbreak Anniversary," which will be released in February 2020.

In the video, the actress is seen dancing in the bathroom, and showbiz personalities and ordinary people appreciate her dance.

Other personalities, including Ahmed Ali Butt, Mathira, and Aliza, commented on Mehwish Hayat's dance video and praised him.

Ordinary people and fans also appreciated his video, but at the same time, people were surprised that big and rich people also danced in bathrooms.

Like ordinary people, Ahmed Ali Butt also commented on Mehwish Hayat's dance in the bathroom and praised her dance.

While people praised Mehwish Hayat's dance, some also appreciated her clean bathroom. Some people commented that maybe the water in the bathroom had stopped flowing, which is why the actress started dancing there. 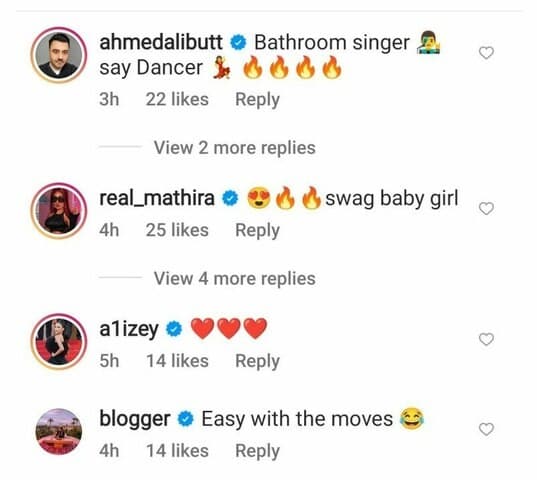 Mehwish Hayat has shared dance videos on other social media platforms, including Instagram, and is generally criticized.

In the past, Mehwish Hayat has been criticized in dance videos for wearing short or tight clothes, but this time he was praised for being in full dress. 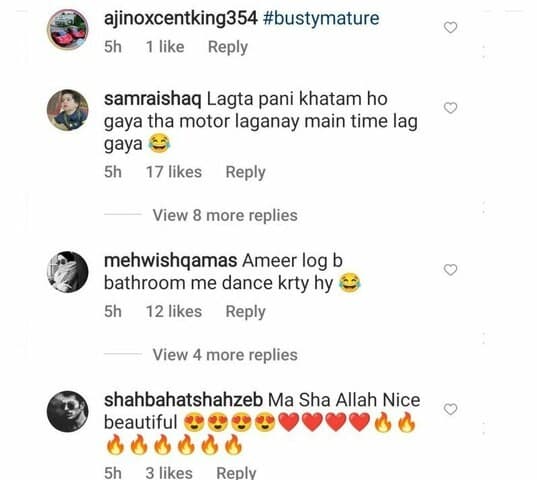 In July last year, Mehwish Hayat also shared a video of the dance with Bhai Danish, on which he was criticized.

Mehwish Hayat has been criticized for sharing dance videos and for bold pictures.