LUMS Students and teachers protest against increase in fees

After the Lahore University of Management Sciences (LUMS) increased the semester fees by more than 40%, students and teachers criticized the university's decision on the social networking site Twitter.

Students and faculty members of the university have strongly criticized the increase in fees, especially in the current situation where most families are facing financial difficulties due to the coronavirus.

The university said in a statement on its official Twitter account on Tuesday that the decision to increase fees had been made before the outbreak and was in line with the annual increase, which includes inflation, energy. Incentives such as incoming costs and devaluation of the rupee were taken into account.

The university claims that fees have been increased by 13% for 2020.

The statement further said that earlier students taking courses of 12 to 20 credit hours were charged a total fee but now the fee will be charged on the basis of credit per hour which will reduce the fees for some students. While some fees will increase.

The students said that this is a problem because the way the undergraduate degree system is designed claims that if students want to graduate on time, they will have to take 16 credit hour courses each semester. 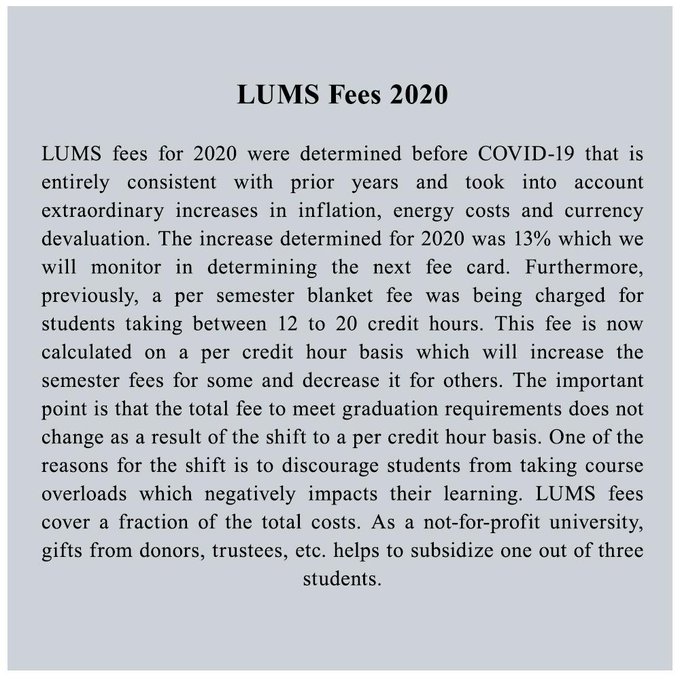 However, he also said that the fee for students taking 16 credit hour courses in the semester has increased by 13.3%, which is also mentioned in the university statement.

"The most important thing is that the total graduation fee has not changed, on an hourly basis," LUMS said in a statement.

Defending the change in policy, LUMS said the new calculation system aims to discourage students from taking more courses because it puts pressure on them and has a negative impact on learning.

One user wrote that in an era of epidemics and recession, LUMS has increased tuition fees by more than 40%.

Dr. Nada Kirmani, Associate Professor of Sociology at LUMS, said that the university could not cause any more difficulties to the students as the families of these students might face difficulties in paying the fees due to financial difficulties. Will explain whether this is the result of a misunderstanding or the decision will be reversed.

A university student wrote that the credit hours system would be very detrimental to poor students (especially those who seek help from others). You are hurting your studies by receiving fees for individual courses.

Umair Javed, another associate professor at LUMS, wrote that the fact is that in these highly uncertain circumstances, it is ridiculous for the university to think about raising fees.

Another student criticized the university for not involving students in the decision-making process before adopting the new fee system.

There is no Corona case in Wuhan today, a ray of hope for the world

Related Posts
The Punjab government has approached the court Against the bailiffs of the Prime Minister's nephew
Stuff up Lahore for the energizing #TECNOPhotoWalk coming very soon!
TECNO Launches its much-awaited Camon 18 series in Pakistan
ECP summoned Bilawal Bhutto Zardari,
Photos of Atif Aslam With Female Fans Go Viral
The government has announced a further reduction of Rs 7 per liter in petrol price
Notice of evacuation of residents of Mud Houses on Trump's Indian visit
Hurricane Amphan kills 9 in India and Bangladesh