Karachi: Traders threatened to open a business from the first of Ramadan

The president of All Karachi Traders Union (ACTI) and other representatives of Karachi traders have announced to open a business from the first of Ramadan.

At a press conference in Karachi, representatives of various trade organizations, including Sharjeel Gopalani, president of the All Karachi Traders Union, announced the opening of markets regardless of the final operating procedure (SOPs) finalized by the Sindh government.

During the discussion, he said that the business community had earlier decided to open shops and bazaars from April 15 but it was later postponed on assurances from the Sindh government.

He said that the Sindh government had assured that the SOPs would be sent to the federal government for approval in the next 48 hours.

The traders said that the Sindh government could have taken its own decisions under the 18th amendment but why is it seeking permission from the federal government for SOPs.

During the meeting, All Karachi Traders Union General Secretary Ahmed Shamsi said, "Whether the SOPs are finalized or not, we will open our business." He also asked the Sindh government to issue SOPs. There are one or two days for

Meanwhile, Suleiman Chawla, president of the Site Association of Industry, urged the Sindh government to turn the current severe lockdown into a 'smart lockdown'.

He said that Karachi was being discriminated against and only in this city lockdown was maintained.

At the same time, he said that Ramadan is approaching and it is a big business season for the business community and the closure these days means a loss for the whole year. 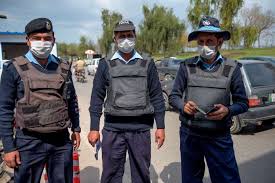 In addition, some traders in Karachi tried to open a business against the lockdown, but police arrested them.

According to Senior Superintendent of Police (SSP) City Muqaddas Hadir, Napier police have registered a case against the traders.

He said that FIR No. 142/2020 was registered against business leader Hamad Honawala, Javed Qureshi, Ehsan Ahmed and Javed Shakur and dozens of others.

According to SSP City Muqaddas Hadir, police arrested six traders against whom the FIR included provisions for rioting, violence, lockdown violation, interference in car government, and violation of 144.

It should be noted here that despite a month-long lockdown in Sindh, the spread of coronavirus in Karachi has become a challenge for officials and experts, and the number of locally transmitted patients in the city has risen from 88 to 1,300 in 30 days.