Showbiz personalities advise PM Imran Khan not to panic ۔ A number of prominent showbiz personalities, while announcing their participation in the PTI's rally in Islamabad, assured the Prime Minister of their support and advised people to leave their homes in support of him. Superstar Shaan Shahid shared an old photo with Imran Khan and expressed solidarity with him and tweeted that Pakistan has raised its voice that it needs a leader who can take it forward on the path of development.

#IstandwithImranKhan Pakistan has spoken they want only one leader to lead them to a brighter future of Pakistan. They have shown solidarity with @ImranKhanPTI you can keep your parliament but you can never take away our leader♥️💯🧿🇵🇰 pic.twitter.com/sRzGeFW8j0

Shaan Shahid also used the hashtag 'I stand with Imran Khan' and wrote that no one can take his leader out of Parliament. Shaan Shahid has been seen tweeting in support of Prime Minister Imran Khan for the last two days and he also appealed to his fans to support the PTI chairman.

Like him, actor Bilal Qureshi, while announcing his participation in the PTI meeting on March 27 in Islamabad on Instagram Story, also advised Imran Khan not to panic. 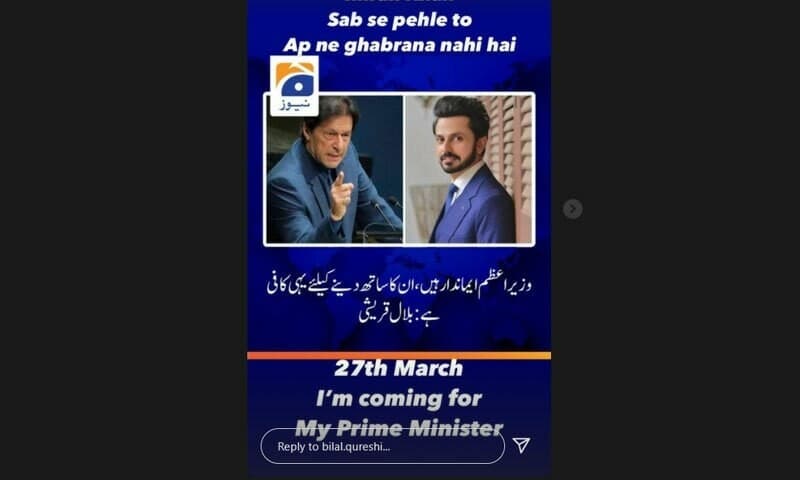 Senior actress Samina Pirzada also supported Prime Minister Imran Khan in her short tweet and wrote that she gave her captain to God.

Drama writer and writer Khalil-ur-Rehman Qamar also released a special video on the sidelines of a PTI rally in the capital, in which he described himself as a non-political person, but also announced his support for Imran Khan. He also appealed to the people to support him.

Like him, senior actor Faisal Qureshi also released a promotional video supporting PTI and supporting Imran Khan, in which he appealed to the fans to attend the rally in Islamabad and support the government.

Senior actor Farhan Ali Agha also released a promotional video in support of Imran Khan and PTI, in which he termed the rally in Islamabad as a war of faith and appealed to the people to participate in it. Give along

Have been a fan of @ImranKhanPTI since he was a sportsman and still an admirer of his leadership. I wish and pray that he completes his tenure. May Allah bless him #AmarBilMaroof @FaisalJavedKhan @fawadchaudhry pic.twitter.com/NIhqqDtg0k

Senior actor Humayun Saeed also tweeted in support of Imran Khan and appealed to the fans to come on the field to support him.

Have been a fan of @ImranKhanPTI since he was a sportsman and still an admirer of his leadership. I wish and pray that he completes his tenure. May Allah bless him #AmarBilMaroof @FaisalJavedKhan @fawadchaudhry pic.twitter.com/NIhqqDtg0k

Singer Salman Ahmed also tweeted in support of PTI and Prime Minister Imran Khan and appealed to the people to attend the Islamabad rally.

Singer Ataullah Issa Khelvi also released a video in support of Prime Minister Imran Khan, appealing to fans to support him and asking people to leave their homes for the sake of Pakistan and Khan