The Islamabad High Court has said that the current justice system has "failed to prevent crime and take legal action against it" because it is "on the verge of constant fighting for justice and apparent destruction".

Chief Justice of the Supreme Court Athar Minallah said this while acquitting the accused in seven different murder cases, in most of which the accused had been lodged in jails for 10 years.

In its judgment, the court said, "Before leaving, we consider it our moral and professional responsibility to record our observations regarding the dangerous and deplorable state of the justice system in the capital Islamabad. This case in the court is just a glimpse." Because most serious crimes are not punished.

The court said that "the purpose of the justice system is to punish the culprit so that the crime can be effectively controlled" but "we have no hesitation in saying that in the present situation this belief (on the justice system) is completely misguided." ' 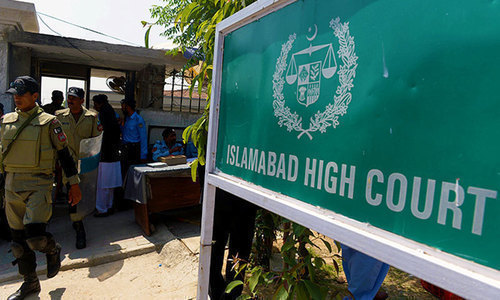 At the same time, he said, "despite acknowledging the shortcomings and weaknesses of the judiciary, it depends on the integrity and professionalism of other key stakeholders, such as the police, prison authorities, and the prosecution."

"Whether due to corruption, negligence or utter incompetence and lack of professionalism," the ruling said.
The justice system is certainly not fulfilling its purpose and instead has become a constant source of murder and apparent injustice. ”

"Incompetence, outdated and obsolete methods used in the investigation of senseless murder, lack of authenticity and professionalism, in this case, are floating on the record," the court said.

The Chief Justice said, "It is unfortunate that this is not the only case but it has been seen in most cases in general.
And it has been observed that the investigating officers are either seemingly satisfied, conciliatory, or completely incompetent.

A Glimpse of Designer Hsy's Debut Role Came to Light