Farmers in neighboring India have been protesting for economic protection and new agricultural laws since September last year, killing 70 farmers so far. Farmers' demonstrations are going on in various states of India including Punjab, Haryana, Karnataka, and the capital New Delhi and they are increasing day by day.

According to the Indian website India Times, as of January 12, 70 farmers had died during the protests due to police violence, hunger, cold and other causes, and farmers were protesting. Farmers are demanding that the government formulate agricultural policies that will ensure the financial security of farmers, but the government does not intend to enact such laws immediately.

Our tribute to all the Peasants of the world.https://t.co/WWnBWxtSVj pic.twitter.com/QpCJVN6fzU

The matter is also pending in the Indian Supreme Court and the court has ordered the government not to enact any legislation violating the rights of farmers at present. Court orders are in place, but Indian farmers are not ready to end the protests, and farmers are seen singing songs during demonstrations to bolster their movement. Among such songs is Pakistani singer Jawad Ahmed's song “Kisana” which was released in December last year, which was released in Punjabi by the singer.

In this regard, the Indian website The Quint said in its report that Jawad Ahmed's song 'Kisana' is being highly appreciated in India and people are praising his song. 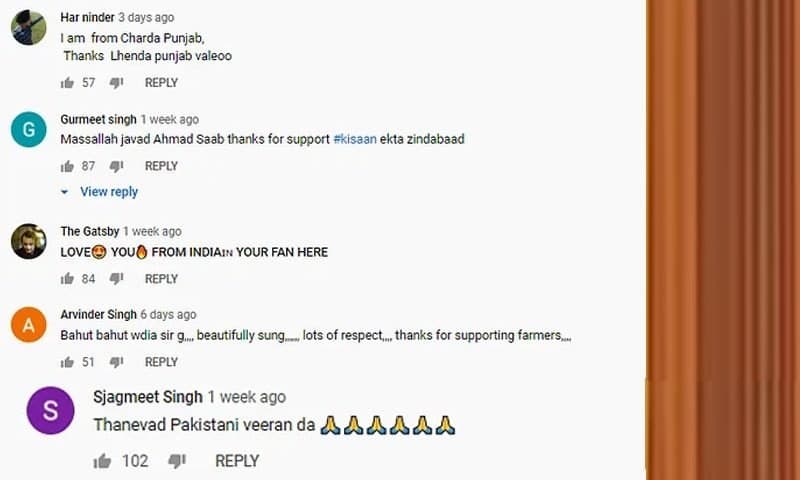 Indians also praised Jawad Ahmed's song on social media and wished him well and wrote that the Pakistani singer came up with the farmers' protest but the Indian singers did not compose any song on his campaign.

Pak vs Bangladesh Series: The guest team will practice today