A gas leak from a chemical plant in the Indian state of Andhra Pradesh has killed at least nine people and affected 1,000 others, while authorities have evacuated areas around the plant and feared an increase in deaths.

According to the French news agency AFP, the gas was leaked from two tanks of 5,000 tons owned by the South Korean company LG Chem and the work was suspended due to the coronavirus lockdown.

Footage shown on Indian television showed women and children lying motionless in the streets of the coastal industrial city of Visakhapatnam.

In this regard, District Hospital Coordinator BK Naik said that at least one thousand people were brought to different hospitals and it is feared that many people will faint in their homes.

He added: "Authorities are also searching homes and working to get people to the hospital who (at the time of the gas leak) fainted while sleeping in their homes." 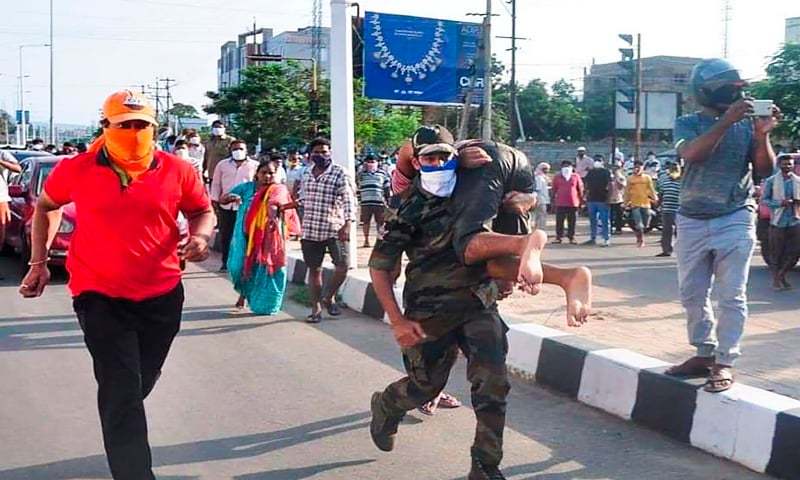 The gas-affected area was evacuated. Photo: AFP
Pictures in front of the hospitals showed 2 or 3 people in each bed, most of whom were unconscious.

The LG Polymer chemical plant is located on the outskirts of a city of 5 million people.

Rani, the assistant commissioner of Visakhapatnam, said the plant was idle due to the lockdown and the gas and the chemical reaction in the tank released gas.

He said that the villagers reported the gas at 3.30 pm and the police personnel who reached here after receiving the information had to be treated immediately.

The queen added that the amount of gas in the air was such that it was felt and it was not possible for anyone to stay there for more than 5 minutes.

LG Cham later said in a statement that the plant had stopped leaking gas, adding that "the gas leakage situation is under control and we are now trying to provide immediate treatment to all those affected."

"We are investigating the cause of the gas leak and the deaths and the damage," the company added.

On the other hand, according to the Times of India, 8 people, including an 8-year-old girl, were killed and 5,000 were affected by the gas leak.

News18 television footage showed people lying in the streets in a coma, with motorbikes parked in the middle of the streets and their riders falling.

WHO dismisses US president's accusation about China

Due to Lockdown, the public focused on television and Also increasing ratings
Related Posts
Bilawal has to be a plea bargain, he is named in five companies
Indian Actress Esha Deol's Instagram Account Was Also Hacked
Kashmir Day: Pak Army releases special song on Kashmir day
Audit of all sugar and flour mills was 'impossible' for commission till April 25: Govt
Kashmir day is being celebrated today for the unity of Kashmiris
Tanveer Awan Appointed CEO of Dhabi Group of Companies
Afghan forces claim to kill 51 Taliban in various attacks
The United States has banned seven key officials, including the Iranian interior minister