Gilgit-Baltistan: The Hispar Glacier has started melting once again, causing a flood in the river in Hassanabad village of Hunza, which has displaced several people and damaged a power plant under construction.

The rising water level in the Hassanabad canal damaged the canals and washed away a section of the Karakoram Highway.

It may be recalled that this glacier located a few kilometers away from Hassanabad village had also started melting in 2018.

The rise of the glacier stopped the flow of water in a canal flowing from the nearby glacier Mochur, which falls into the Hunza River, which has since turned into an artificial lake.

In this regard, Deputy Commissioner Hunza said that due to the discharge of water from the lake, the flow of water in the Hassanabad drain has increased. 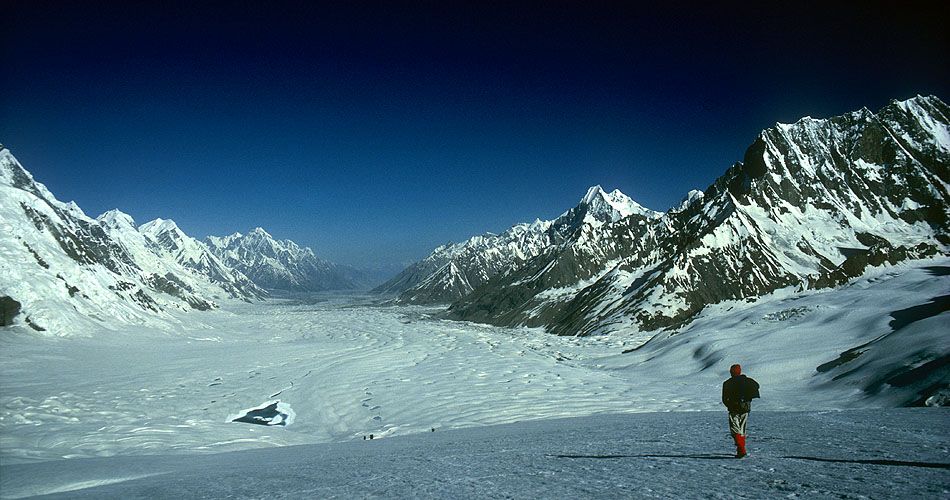 He said that 14 houses along the Hassanabad canal have been evacuated and the Makis have been shifted to tents.

He said that two and a half to three thousand cusecs of water were discharged from the lake which caused the flood in the Hassanabad canal and as a result a part of Karakoram highway was washed away and traffic was suspended for several hours.

The deputy commissioner further said that the floods damaged 2 MW power plant, vacant and cultivated land, along with drains, existing trees and drinking, and irrigation water lines and canals in various villages of Central Hunza. ۔

The district administration briefed officials on the possibility of the lake erupting and the potential damage.

Speaking to reporters on the occasion, the Chief Minister said that the federal government has been requested to provide a permanent solution to the problems caused by the Hispar Glacier while emergency measures are being taken to reduce the damage.

At the same time, he said that the eruption of the glacier was likely to damage the Pak-China Economic Corridor and the Hassanabad Bridge connecting Pakistan and China.

The Chief Minister said that in case of possible damage to the existing bridge, an alternative bridge was being constructed and the concerned department was working to rehabilitate the affected section of Karakoram Highway.

Hafeez-ur-Rehman feared that the melting of the Hispar Glacier could increase if the temperature rises.

TECNO IS ABOUT TO DROP ANOTHER FLAGSHIP PHONE IN CAMON SERIES!